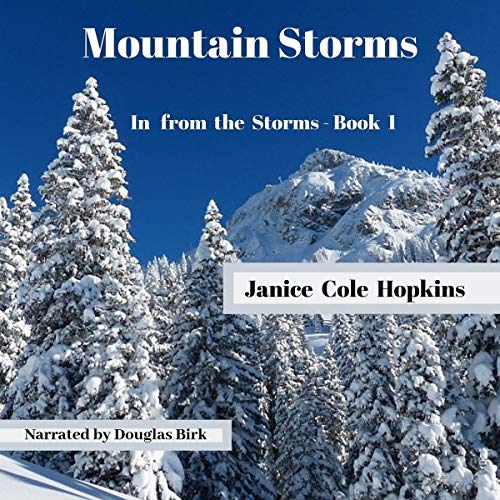 When her family situation worsens, Aileas Douglas runs away, but she’s unprepared for the Wyoming mountains. A friendly dog leads her to safety, but his master just might pose the most dangerous of all, especially to her heart.

Wounded in the Civil War and deserted by his betrothed, Ian MacGregor becomes a recluse in a remote cabin in Wyoming Territory. He thinks Aileas might be an angel when she appears beside his sickbed, but even later, he’s drawn to her in ways he doesn’t understand.

However, no woman would ever be interested in him now, and he needs to protect himself from another heartbreak, but is this even possible where Aileas is concerned?

What listeners say about Mountain Storms

The story takes us back to the old way of living before all these modern technology. From a covered wagon to a home and some of the traveling in between. I really like the story

Aileas is heading west with her three stepbrothers and her stepfather. Unfortunately, one of her stepbrothers wants her to become his wife. He will stop at nothing to get what he wants. When her situation becomes impossible, she runs away, up into the mountains, and tries her best to hide her tracks. A winter storm arises and a loveable dog leads her to a cabin and to his feverish master, Ian.

Ian received a terrible scar on his face in the war. When he returned home to his fianceé, she was too horrified by his appearance to go through with the marriage. Ian takes his sister with him and heads west into the mountains where he has lived for several years in a remote cabin. When his sister turns 17, she abandons him to return to her aunt. Due to so much abandonment from the people he loved, he doesn't believe any woman can ever see passed his scar to the man within. Aileas nurses him back to health and stays to cook and clean for him. But he knows one day she will leave too. It's inevitable.

I thoroughly enjoyed this novel. There are plenty of tense moments and suspense to encourage you not to put the book down. Aileas' stepbrother is not one to give up easily, nor take no for an answer. The author does a beautiful job of developing the romance. Ian cannot imagine such a lovely lady wanting him as a husband, so he tries not to read anything into her kindness to him. She would love nothing more than to be cared for and loved by an honorable man like Ian. Unfortunately, Aileas knows his scar is a barrier between them representing the love he lost. He must love his fianceé still. Aileas barely notices the scar for she sees the whole man who is worthy of her trust. The scar does not hide how truly handsome he is. But since he hasn't asked her to stay, he must be looking forward to her leaving. Will they find the courage to breakdown the walls standing between them?

I Recommend! A Wonderful Book!

I listened to the audiobook and I loved it. The narrator brought the characters to life for me and the story was wonderful right from the start. There’s a thread of faith here too. I love these stories that takes us back to the old way of living. From a covered wagon to a home and some of the traveling in between. All of it made me want to keep listening. Several times I couldn’t see how the characters were going to get out of the mess they were in. That of course makes an interesting tale. I highly recommend this book.
I received a free audiobook but I was not required to write a positive review. All opinions are my own.

I really enjoyed the story! It was interesting, easy to follow, and really kept my attention. I loved the characters. At first, I wasn’t too sure about the narrator. I am more used to female narrators. After a while, it was fine. It struck me as a bit humorous when he was reading her in peril. But he really does do a good job. I listened to it in one day as I worked around the house.
I am going to read more from this author for sure! Very enjoyable!

Enjoyed the narration to this story. The story was great and love the character growth that happens by the end of the story. The characters have challenges to face and situations to deal with adding some suspense to the story which really kept me listening.

Shelter in a storm

Interesting story with good narration. Aileas has to get away from her family and fast. Her stepdad wants her to marry her step brother after he tries to rape her. She packs what she can and steals away during the night. Unfortunately she is not prepared for the Wyoming mountains and a snow storm. A friendly dog leads her to his master's cabin. Here she finds the man sick with fever. She nursing him back to health and learns his name is Ian. Follow this tale of goodness out of a storm.

I enjoyed this book and series. There were a few pieces of it I didn’t care for from a Christian perspective, but how it was written made a world of difference. I loved the characters and would love to see more of them if the series continues!

I enjoyed this sappy story, and the fight he had finding his worthiness! For such a believer, it was a bit ridiculous his scar affected his self worth so bad, but that was the main thread throughout the whole story!
The narration I did not enjoy. His character voices were silly and a bit like a couple of kids playing dolls. I think he would be better if the voices sounded more realistic. The narrator has promise though. His speech cadence was very good and I was never unsure of who was speaking. I loved his voice when just narrating the story, but not his character voices.