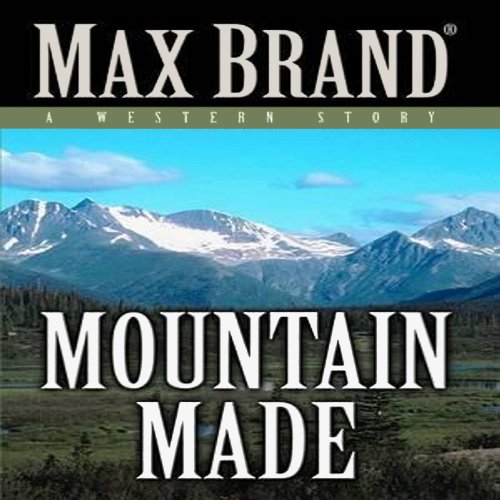 Max Brand is a penname of Frederick Faust, one of America’s most prolific writers. His westerns are famous in that genre’s literary canon, though they only contribute a drop in the bucket to the tens of millions of words that Faust wrote over his career, which was tragically cut short by shrapnel in Italy in World War II.

Listening to Joe Geoffrey’s trustworthy and grandfatherly voice perform this story of love and revenge, a listener understands why certain vocal chords demand to be professionalized. Geoffrey could easily be a grizzled cowboy recounting the tale around a campfire, and a listener experiences the throaty authenticity of the performance as though transported to the Wild West.

Man and beast come together in this classic, plot-twisting Western!

Winsor Glanvil pays court to Louise Carney, heiress to a fortune, and she agrees to marry him. The marriage is opposed by big Jack Rutledge, a jealous rival and formidable foe, so Glanvil and Louise plan to be married in a sequestered valley by a local clergyman. Rutledge and his supporters, learning of the plan, arrive in the valley ahead of the two and seize Glanvil. Glanvil is beaten mercilessly and Rutledge disfigures him, destroying one side of his face with the cutting edge of a spur. Rutledge then rejoins his gang in the clergyman’s house. Although Glanvil has been seriously weakened, he manages to get access to firearms and breaks in on the gang, shooting Rutledge and escaping on a stolen horse.

Deep in the hills, safely beyond pursuit but exhausted and near death, Glanvil finds a cave in which to seek sanctuary. Unfortunately the cave is not empty - it is the den of a she-wolf and her young cub. Now Glanvil has another fight to win. Yet over the winter months while recovering his health, Glanvil manages to bond with the wolves. When he sets out in the spring to revenge himself on Rutledge’s gang - only to learn that Rutledge is very much alive and engaged to Louise Carney - he is not alone.

What listeners say about Mountain Made