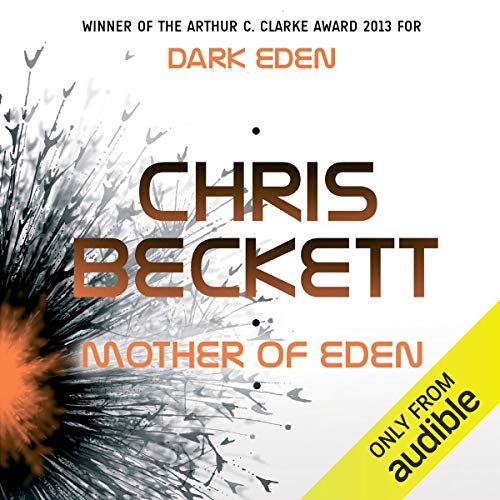 We speak of a mother's love, but we forget her power. Power over life. Power to give and to withhold.

Generations after the breakup of the human family of Eden, the Johnfolk emphasise knowledge and innovation, the Davidfolk tradition and cohesion.

But both have built hierarchical societies sustained by violence and dominated by men - and both claim to be the favoured children of a long-dead woman from Earth that all Eden knows as Gela, the mother of them all.

When Starlight Brooking meets a handsome and powerful man from across Worldpool, she believes he will offer an outlet for her ambition and energy. But she has no idea that she will be a stand-in for Gela herself and wear Gela's ring on her own finger. And she has no idea of the enemies she will make, no inkling that a time will come when she, like John Redlantern, will choose to kill....

Chris Beckett is a university lecturer living in Cambridge. He has written over 20 short stories, many of them originally published in Interzone and Asimov's. He is the winner of the Edge Hill Short Story competition, 2009, for "The Turing Test", as well as the prestigious Arthur C. Clarke Award, 2013, for Dark Eden.

"A classic theme, beautifully told." (Sunday Telegraph on Dark Eden)
"This is a world I'm desperate to return to." (Guardian on Dark Eden)
"There's no justice if Dark Eden, with its beautiful, terrifying planet, slowly revealed, fails to bring Beckett awards." (The Sunday Times on Dark Eden)

What listeners say about Mother of Eden

This is mostly great, but Jessica Martin (whose narration is otherwise very good) has totally misread the point of the word repetition. It’s meant as emphasis, instead of saying ‘very good’ the characters say ‘good good’. She reads it like each word is part of a different sentence, with a pause. It’s a minor gripe, but it does change the meaning in places, such is the clever way Beckett has simplified the language

This is the third Chris Beckett book I've had the pleasure to enjoy, and as with the other two it is one of the best so-called science fiction books of the hundreds I've read. I say "so-called" because as with all the best science fiction, this is not a story of space ships and technologies and aliens, but of the relationships and myths people weave as they seek to understand and belong. Start with Dark Eden then read this. Then read everything else this author has written. Chris Beckett is one of science fiction's greats, even if that fact isn't yet common knowledge. Thank you Chris!

What made the experience of listening to Mother of Eden the most enjoyable?

It was great to hear how the colony had advanced since Dark Eden. It is very absorbing story and enjoyed it a lot.

What other book might you compare Mother of Eden to, and why?

Which character – as performed by Jessica Martin and Oliver Hembrough – was your favourite?

When Greenstone was contenplating death on the waterfall

Worthy sequel, but too political, not enough world

Where does Mother of Eden rank among all the audiobooks you’ve listened to so far?

Somewhere in the middle, it was an enjoyable listen, but not outstanding.

Starlight Brooking. She's feisty and thoughtful, clever and strong, heroic and believable. A very well fleshed out character who I could empathise with and follow through the story.

Have you listened to any of Jessica Martin and Oliver Hembrough ’s other performances? How does this one compare?

Yes, during the first of this series, Dark Eden. I think they both performed excellently in both cases. Their ability to create distinction between the various characters voices is excellent and felt like a cast of many, rather than just two.

It made me laugh and cry at times. It is a melancholy story I feel, I was shocked and angry at times with the twists and turns, not at the author, but at the world in which the characters ran. I definitely felt engaged with the characters and their world.

I bought this because I loved Dark Eden. I think this is a perfectly respectable follow-up to that story, and I fully engaged with the world and the characters, all much moved on from the last. I was, however, slightly disappointed that the focus of this was on the politics, rather than the world in which they lived. There are a number of moments in the book where it feels we might learn more about Eden. The evolution of the Bats is particularly promising, but the book failed to really explore this. Instead we ended up in the twists and turns of political intrigue, all of which felt believable within the setting, but plenty of other books give you political intrigue. What the first Dark Eden gave us was humanity struggling to survive in a world that had no place for it. I would have liked more about that aspect, and less about warring factions.

I would like to say, however, that I feel that this, and the first, book offer a very good read in respect of gender equality. The exploration of the rise and fall of men and women and their influence on the shape of society is interesting and thought provoking. The equal treatment of characters by the author, irrespective of, rather than because of, their gender, are noteworthy. Is Chris Beckett and feminist?

If you could sum up Mother of Eden in three words, what would they be?

Would you be willing to try another book from Chris Beckett? Why or why not?

Dark Eden was amazing.The second book Mother of Eden lacked the surprises the first book had in dark shovels. The first book had some element of Sci Fi the 2nd book was anthropology and a form of history of ancient religions. I didnt empathise with any of the characters unlike the first book where I felt I was with them. Heavy going

The past is always changing.

Three generations later the story of humans in Eden continues with new protagonist and very different aims from the world we first encountered, some of them have discovered metals and some are big traders, with a form of money to make easy exchange for different technologies or goods, slavery and divisions of social casts are prevalent in some tribes, others try to hold on to their first aims but this world is changing fast fast.
Starlight Brooking our heroine in this story is complex and driven, smart, machiavellian, soft and hard, and like this book never just what you expect, there are no good or just bad characters but people driven by their aims and providence and circumstances deciding what will be the ultimate pass, there is no gods, no magic just reality and the manipulation of all in the game power.
This book exposes what is the best of us and the worst in us. our capability to love and hate with total abandonment of morals and understanding of our ultimate aim, or the price that we will pay for attaining it.
For me this is the kind of science fiction I love, magic is non existent and good and evil are not forces but just shades of desire, impulses that motivate and destroy in equal parts and technology is a double edge blade hidden in a dark bag of destinies and possibilities.

good, but not good, good.

bought on the strength of dark Eden. not as captivating but still enjoyed reading it.

I listened to all three of the audio books in this epic trilogy and enjoyed each one, although I struggled a bit with some of the language at the start, before accepting that the vocabulary of the inhabitants of the planet fitted well with the storyline.
The story considers the follies of humankind and poses some interesting questions about the relationship between men and women, how we deal with power and our constant desire for "something better." How do we make progress as a society while respecting the lives and wishes of our fellow beings?
There are strong female characters and an equally strong feminist message, which appealed to me as a fan of feminist sci-fi.

This is a good continuation of the more innovative first installment. The main character's trajectory is not plausible and this book offers fewer surprises than the first. Nevertheless, it lives well within the parameters of Beckett's world. The audiobook has very good performances throughout and brings the text alive.