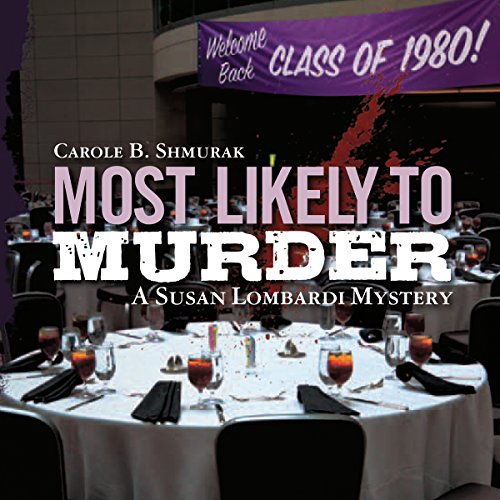 Most Likely to Murder: A Susan Lombardi Mystery

By: Carole B. Shmurak
Narrated by: Barbara Benjamin-Creel
Free with 30-day trial

What high school class has a 32 year reunion? A class whose president has left the country, whose vice president is dead, and whose treasurer is in the Witness Protection program - in fact, Professor Susan Lombardi's class from Count Basie High School. Susan has misgivings about revisiting her hometown: she's leery of seeing her former high school sweetheart, now a high tech millionaire, and reluctant to get involved in a battle between her squabbling brothers. But when she does go, one of her “old gang” ends up dead, and Susan and her friends team up to find the classmate Most Likely to Murder.

What listeners say about Most Likely to Murder: A Susan Lombardi Mystery

This is the third book in the Susan Lombardi Mystery Series. I enjoy these quick cozy mysteries, they have great detail for their length. I am familiar with the characters at this point and know what to expect.

I love the dynamic between Susan and Swash. They really are a great example of marriage working. It is nice how she uses him to bounce her theories and he puts up with her investigations.

This wasn't a taxing mystery, but it was very engaging and entertaining. I love seeing things evolve over time with her best friend and the shady boyfriend. I expect that will come up in a later book, it can not end well.

I listened to the audiobook narrated by Barbara Benjamin-Creel, who has been with the series from the beginning. She has a terrific feel for the characters and situations. I love how she voices Susan, it really suits her attitude. Love e smooth pace and even tone. She continues to keep the voices consistent and is a pleasure to listen to each time.

Overall this has been a very interesting series, I can not wait to see what happens next.

Disclosure – I received this audiobook in exchange for an honest review. All thoughts opinions and ratings are my own.

*** If you found this review at all helpful, please take a moment to let me know. I love reading and sharing my opinions with other readers. Thanks for taking the time to read my review! You can see more audiobook reviews on my blog Eargasms Audiobook Reviews ***

My Favorite So Far

“Most Likely to Murder” was my favorite in the series. It keeps getting better and better. In this story, Susan is on sabbatical and she and her cousin Judy are planning a 32 year high school reunion at William James Basie HS. While going over the guest list they discover that one of their classmates had disappeared and was rumored to be in the Witness Protection program. They found several other friends, including Susan’s old boyfriend Richard, and Toby the pretty girl who had become a popular news reporter on a major network.

After using social media to locate the rest of their old friends, Susan receives a random email from someone named Xander Drake who claims to have been in their class and is planning to attend the reunion. They don’t recall ever knowing anyone with that name which draws some suspicion.

Susan’s best friend Elaine is still there and good ole Swash surprised me by not attending the reunion with Susan. Swash is Susan’s husband and a great supporting character.
The story was fun and exciting, and the characters are like old friends or family you haven’t seen in a while. It’s always fun catching up with them. Overall, I really enjoyed this adventure.

About the narrator: Barbara Benjamin-Creel did an EXCEPTIONAL job voicing this audiobook. There were several new characters with their own personalities through Barbara’s voice. To me, she was half the story. She kept the story moving along at a good pace along with giving everyone their own identity. It was all very well done and thus far my favorite.

reminded me of murder she wrote

Very good story, reminded me of murder she wrote. There were a lot of different characters so at times I had trouble remembering who was who.. she does have the ability to keep your attention though..
I received this audio free for a review

Was it the most likely?

What high school class has a 32 year reunion? A class whose president has left the country, whose vice president is dead, and whose treasurer is in the Witness Protection program - in fact, Professor Susan Lombardi's class from Count Basie High School. Susan has misgivings about revisiting her hometown: she's leery of seeing her former high school sweetheart, now a high tech millionaire, and reluctant to get involved in a battle between her squabbling brothers. But when she does go, one of her “old gang” ends up dead, and Susan and her friends team up to find the classmate Most Likely to Murder.
©2012 Carole B. Shmurak (P)2014 Carole B. Shmurak.

The irrepressible Susan is at it again! Reluctantly, she has agreed to help organise her High School 32 year reunion. Most of the classmates - albeit a little nonplussed at the thought of the first reunion occurring at thirty two years after the fact - do attend. I was delighted though to discover that one of the absentees now resided on the Island of Tasmania, my home State of Australia, the author may want to check on time differences between the two countries though, 12 hours doesn't do it!

Anyway, back to the story, the reunion eventually happens, but, of course, it all gets spoiled when the very next day one of their own is murdered during an organised run. The surviving classmates decide to solve the murder, Susan being coordinating sleuth in charge of course.
It's all quite witty and sharp, I enjoyed the dialogue and humour, it's not the best of mysteries, but it's probably an impossibility to produce a light hearted, easy listen and a deeply dark mystery!
Although I enjoyed the first book in this series "Dead Mistress", I thought "Most Likely to Murder" to be a big improvement, I'd happily listen to more.

The first Susan Lombardi mystery I listened to was narrated by Barbara Benjamin-Creel, I remember being so impressed with her work, and how it soon became obvious to the listener that here is a true professional. Her characterisations are spot on, I have no trouble in envisioning all the characters in my mind, Susan is just as she should be, bright, sparky, nosy and endearing. Barbara does everything right, so who could ask for more?

This is a good murder mystery at a high school reunion. I've listened to all 4 of the Susan Lombardi mysteries, and I'm looking forward to more. They are really good mystery novel.

Lets go to a Class Reunion ... and a Murder?

The Susan Lombardi Mysteries is a cozy mystery series. The stories are well thought out and the mysteries are solid. I would recommend them to all my friends who like to be entertained.

The pre-reunion party where Susan meets up with her friends from high school. As this is their 32 year reunion, and first ever reunion, the nervousness is there. Having just recently attended my own 25 year high school reunion I understood exactly where Susan was coming from. Were the friends you had in high school going to be the same people or will they be really different.

I have enjoyed the Susan Lombardi Mystery Series. Susan is a likable character and her relationship with her husband Swash and her best friend Elaine are real. Ms. Benjamin-Creel makes the story flow. She has continued to make these characters seem like old friends. I can't wait to see if there are more Susan Lombardi books!

A wonderful, fun & entertaining cozy mystery! This is a story about a very late class reunion (32 years late) & a murder that happens in connection to the reunion. Remember back in the high school year books when people were voted to be most likely to... this takes us onto the story!

Susan Lombardi has never been to her high school reunion because her class never had one with the president always out of the county, vice president of her class died and the class treasurer is in the witness protection program. So a few classmates decide to hold their fist class reunion even if it had been 32 years since they graduated. The reunion went well, the party was awesome & the next day during a charity race, a classmate drops dead. Murder it was! Now Susan and friends look at each classmate and ask themselves, who would we vote most likely to murder someone? Not just anyone was murdered either, but a very wealthy man who was also a classmate.

This story is well written and fun. I truly enjoyed listening to it and many things made a lot of sense to me. This is my first read by this author Carole B Shmurak & I look forward to reading more books by her. This book caught my interest from the beginning and held me til the end. While I have never attended a class reunion myself, I can imagine it going just about like this too! The narrator, Barbara Benjamin-Creel spoke clearly with many voices & I found her to be entertaining and easy to follow along too. Most importantly, this narrator was easy on the ears! Kudos to both of you ladies for a job well done!

Really enjoyed Most Likely to Murder!!

I thoroughly enjoyed this novel! It is the first novel by Carole B. Schmurak, l now plan to read all her other books!!!

This is a quick and entertaining read. I look forward to reading more books in this series.