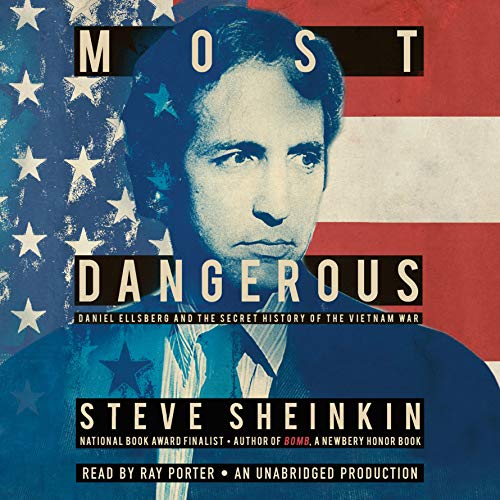 From Steve Sheinkin, the award-winning author of The Port Chicago 50 and Bomb , comes a tense, exciting exploration of what the Times deemed "the greatest story of the century": how Daniel Ellsberg transformed from obscure government analyst into "the most dangerous man in America" and risked everything to expose the government's deceit.

On June 13, 1971, the front page of the New York Times announced the existence of a 7,000-page collection of documents containing a secret history of the Vietnam War. Known as The Pentagon Papers, these documents had been commissioned by Secretary of Defense Robert McNamara. Chronicling every action the government had taken in the Vietnam War, they revealed a pattern of deception spanning over 20 years and four presidencies and forever changed the relationship between American citizens and the politicians claiming to represent their interests.

A provocative audiobook that interrogates the meanings of patriotism, freedom, and integrity, Most Dangerous further establishes Steve Sheinkin as a leader in children's nonfiction.

What listeners say about Most Dangerous

Stand up and be counted.

After listening to this book I started to read 7000 + Page documents of the Pentagon papers that are in the National Archives available on the internet. I got through about 500 pages and found it incredibly interesting it's nothing more than a history book; and I was wondering what team men and women sat down in a room somewhere in the Pentagon and put this together; it's written like a college paper it's very structured; very articulated, punctuated referenced, it's amazing. It really would have been amazing to have seen the first reporters eyes pop out when they got portions of this document and then synopsized it into the newspapers. I particularly enjoyed the stance that the newspapers had against the US government to publish the sections they did, and not back down. My thanks to David Ellsberg for having the strength to proceed with what he did.

I couldn’t stop listening to this book! It is well written and performed. I learned a ton about the war and some of the personalities involved. Sheinken does an awesome job of switching between Ellsberg’s personal story and the big picture of Vietnam.

Just what I wanted

This book struck the right balance between information and storytelling. It held my attention on my 6hr drive and I couldn’t wait to listen to the end, so finished it at home.

This book made history come alive. It was so detailed but interesting so much information that you would not be able to get from any textbook. I loved it!

I couldn't stop listening to this book. It is a "must read" for any history fan.

'' Most Dangerous " the best book ever to explain the insider view of the Vietnam War.

I loved this book because, being in my early teens I did not understand how anyone could WIN the Vietnam war. With all the causalities being reported. This book gave me an insight into this war , and effected my feeling greatly. I love Ray Porter"s narration. He is a perfect narrator for Most Dangerous . I listened to it straight through.

This is a very interesting story and well told. All Americans should read this book. It is very enlightening about the various presidents actions during the war. People need to understand what happens in politics and US foreign policy. The more stories like this which are told the more suspicious the citizens will be of their government which is generally good. This book reveals a lot about actual conversations by Nixon and Johnson and how they steered the war. Draftees of this era have a right to be pissed. This type of behavior by the US still continues today and we can't improve as a nation unless the citizens understand how the government actually functions and how the decisions it makes directly affect the lives of people in America.

I didn't like the narration. The narrator over emphasizes many statements which I didn't think was necessary. It seems like he is emphasizing sentences and points he wants to drive home. His impersonations of other people all sound like a girl talking. Don't let this deter you from reading this book. This is just my opinion and it's a very good book to listen to regardless.

Content. Excellent overview. Ellsberg is one spectacular hero and this audio explains why just as it exposes Nixon and his lackeys for the self-righteous criminals they were.

Given current and recent events (everything from Wikileaks, to Snowden, to Trumps election) these events seem prosaic. The story is well told and a fascinating read. Albeit it is, in today’s digital age, slightly amusing to read about a series of leaks that were enabled by carrying Top Secret documents across the country in boxes tied up string and given their own seat on the aircraft...

If you want the abridged version watch Meryl Streep and Tom Hanks in The Post.

loved it!. , the narrator was fantastic!
great story about history that many don't know what happened.