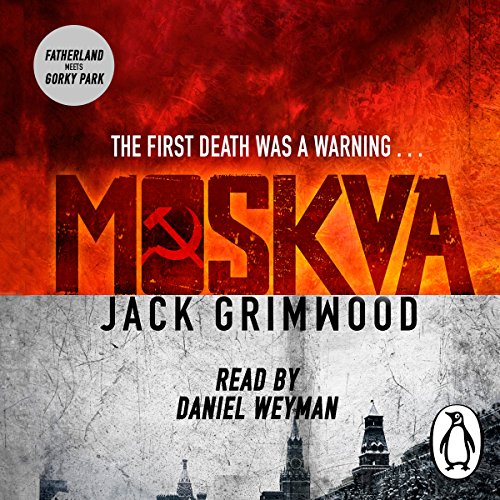 Red Square, 1985. The naked body of a young man is left outside the walls of the Kremlin: frozen solid - like marble to the touch - and missing the little finger from his right hand.

A week later Alex Marston, the headstrong 15-year-old daughter of the British ambassador, disappears. Army intelligence officer Tom Fox, posted to Moscow to keep him from telling the truth to a government committee, is asked to help find her. It's a shot at redemption. But Russia is reluctant to give up the worst of her secrets.

As Fox's investigation sees him dragged deeper towards the dark heart of a Soviet establishment determined to protect its own, so his fears grow, with those of the girl's father, for Alex's safety. And if Fox can't find her soon, she looks likely to become the next victim of a sadistic killer whose story is bound tightly to that of his country's terrible past....

Praise for Jack Grimwood: "Tom Fox is well drawn, the action scenes are filled with energy and tension, but the real hero of Moskva is Russia itself, bleak, corrupt, falling apart, but with an incurable humanity." (Tom Callaghan, author of A Killing Winter)
"A first-rate thriller - Moskva grips from the very first page. Heartily recommended." (William Ryan, author of The Twelfth Department) < br />"A compulsive and supremely intelligent thriller from a master stylist." (Michael Marshall, author of The Straw Men)
'"Hard to know what to praise first here: the operatic sweep of this mesmerising novel; the surefooted orchestration of tension; or the vividly realised sense of time and place; all of these factors mark Jack Grimwood's Moskva out as something special in the arena of international thrillers." (Barry Forshaw, author of Brit Noir)
"Grimwood is a damned fine writer." ( Independent)

What listeners say about Moskva

It sent me to sleep each night thinking I am missing the point. However the point was a dreary self obsessed man recounting a dull as could be life. He should have stayed in the burning house and we could have had a five page short story

I enjoyed listening to this book, I liked the writing, turn of phrase and the narration. However I think that I would've perhaps got more out of it and understood it better in written form. I found the jumps between time periods confusing at times Also when people were refered to by either their first name or surname or title I found that confusing.
I generally enjoy a political/crime thriller however I did find this somewhat disjointed, again that could be the format rather than the writing.

I kept on with it despite one thriller cliché after another and some unnecessary brutality because the story kept on being interesting and the central character was engaging. I'd listen to Daniel Weyman narrate again

Not really worth the effort... visceral with victims and a lot of confusing twists that don t hang togethet

The Russians are back and they are bad to the bone

Russia is back in the news and the comfort of an old enemy is welcome by writers, you can make them as bad as you like and have no political correctness thrown at you, plus we have the history that is still influencing the future we understand not that new clouded religious terror and all the unmentionables of our new Orwellian reality. So here we have an old fashion thriller with villains we can mention without the fear of starting a racist protest or having to make our guys into the instigators of the evil. Entertaining and well paced if not fresh.

I found this book did not hold my attention. There seemed to be no story to follow. After several attempts to listen I have given up

A disgraced British agent is tasked with finding the missing daughter of the UK ambassador in Moscow during the late 80s. Good entertainment and good narrator. Characters are well presented and the author sets the scene of a Soviet Union in terminal decline very convincingly. The flawed hero has a great deal of charm as he negotiates his way through tricky situations.

The beginning of the era of Glasnost is an interesting setting for a book. Neither classic Soviet Union nor Putin’s oligarchy, the period was one of tentative hope. This novel plays with hints of that while reminding us that Russian leaders have always been happy to rely on the death of huge numbers to win out in the end.

A great and storyline

A wholly enjoyable story with a great plot line. Believable characters at a crossroads of the Cold War. Highly recommended. 👍👍