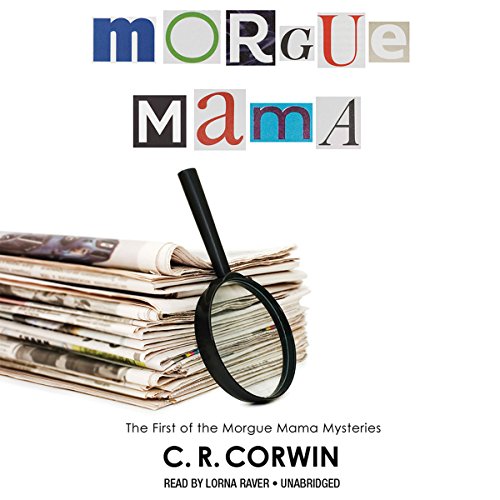 Most people think of the morgue as that cold and sterile facility where medical examiners do their necessary, albeit dreadful, work. Less familiar is the other type of morgue, the dry and dusty version, the newspaper morgue, usually housed in the basements and backrooms of newspaper buildings, where old news clippings are filed away. Dolly Madison Sprowls has been in charge of the Hannawa Herald-Union’s morgue for more than forty years. She is gruff and salty, well past the age of retirement, and the unchallenged queen of her ink-stained domain. Reporters call her Morgue Mama but only behind her back.

Maddy Sprowls’ well-ordered world gets turned upside down when the paper hires twenty-four-year-old Aubrey McGinty for its police beat. Aubrey loses no time in questioning the conviction of Sissy James for the murder of televangelist Buddy Wing. It’s true that Sissy had quickly confessed - live on television - to poisoning the famous preacher, and the evidence does seem overwhelming. But the ambitious young reporter doesn’t believe Sissy is guilty. Aubrey enlists the help of Morgue Mama to dig into the morgue’s files. Their search for the truth soon becomes harrowing - and dangerous - as they uncover enough suspects to fill a church with those who do the devil’s work

“A bell ringer of a crime novel. Everything about the setting rings absolutely true, and the plot is great.” (Dana Stabenow, Edgar Award–winning and  New York Times best-selling mystery novelist)
“In Corwin’s witty and engaging caper…newspaper archivist Dolly Madison Sprowls, called Morgue Mama ‘behind her back,’ and a determined cub reporter, Aubrey McGinty, team up to investigate the poisoning of TV evangelist Buddy Wing…Her matchup with Aubrey brings her and the reader genuine excitement right through the stunning conclusion to this lively adventure.” ( Publishers Weekly)
“Retirement-aged but still formidable newspaper librarian Dolly Madison Sprowls teams up with youthful police reporter Aubrey McGinty to investigate a recent murder case…Serviceable prose, knotty characters, and major unexpected plot twists should endear this first novel to most readers.” ( Library Journal)

What listeners say about Morgue Mama

The narrator of C.R. Corwin's Morgue Mama mysteries is excellent. I would love to meet Maddie Sprowls. She is just the nosy old lady I want to be when I'm her age.

Fun and engaged all the way to the twisted end

I chose this book first because I was intrigued by the narrator's voice, second because I liked the description of it being a classic cozy. That means there is no graphic sex or gory violence; just a little murder over there where nobody describes it to you to kick off the reason to tell a story about people. I also hoped that the setting would give a little different spin on the stereotypical Aunt Jane or Mrs. Fletcher finding out who-dun-it.

The bonus is that I really enjoyed the story. It takes place in a journalistic setting with reporters, librarians, editors and all the people who make up a newspaper staff. The death being investigated by a rookie crime beat reporter, Aubrey McGintey, is that of a famous televangelist who was poisoned on camera in the middle of his sermon while the cameras were rolling. The new kid doesn't think the right person is in prison and seeks to secure the release of the confessed killer. To do this she solicits the aid of the paper's librarian, Dolly Madison Sprowls, who is mostly known as Maddy to her friends, but nicknamed Morgue Momma by co-workers behind her back because of her job in the paper's morgue storage of old stories and her sour disposition,

While I don't think that I have to guess the end of the story to enjoy a book, I don't like it to totally surprise me either. I debated with myself over whether there was enough information throughout the story to be able to figure out the ending before the twist totally floored me. I don't think there is, but maybe I was just so caught up in the people and their stories that I missed the evidence that was being collected.

I'll pay more attention when I listen to it again.

Where does Morgue Mama rank among all the audiobooks you’ve listened to so far?

It was very funny and fun.

The characters are interesting and out of the ordinary.

There were many parts of the book I liked, The car chase, comes to mind right now.

WhoDunIt surprised me! I love that!

I'd previously read "The Unraveling of Violetta Bell" -- bought on sale & delayed, delayed, delayed to read -- and, when I finally started it, loved it. I delayed, delayed, delayed again -- huge stack of backleveled books. Finally began and liked it from the very beginning and loved that I didn't guess whodunit! Excellent performance. While listening thought it could have used a little editing out of some details that didn't seem to matter, but even the making of the lasagna turned out to have a role in the ultimate solution, so can't really complain.

whodunit with a surprise conclusion

lorna raver performed this story excellently, no one could have done it better bringing dolly (morgue mama) to life.
a very good crime story set in a newspaper office it follows Aubrey as she tries to find the killer of a tele evangelist.
good characterisation and plot line.
recommend.