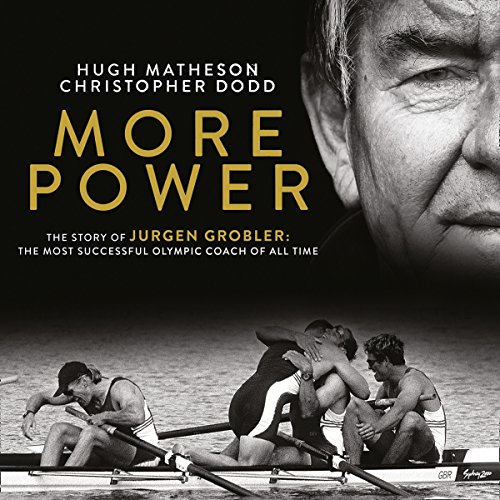 Jurgen Grobler’s Olympic coaching career is one of legend, yet the man himself has remained resolutely out of the spotlight. Over the last 20 years he has masterminded British Rowing’s incomparable success. And when the difference between gold and silver can mean mere fractions of a second, Jurgen Grobler has consistently delivered Olympic gold through various boat classes and with an ever-changing group of athletes.

This authoritative account of Grobler’s career straddles the Iron Curtain, beginning in the German Democratic Republic, where systemic state-funded doping was an open secret, before crossing to Britain following the fall of the Berlin Wall. And whilst culture and sport have shifted dramatically over the last half century, Grobler’s pursuit of greatness has never faltered.

Written by Olympic medallist Hugh Matheson and rowing historian Christopher Dodd, More Power is the unmissable story of one man’s quest for glory and sets out to unlock the secrets of Jurgen Grobler: the finest coach Olympic sport has ever seen.

What listeners say about More Power

Many names were botched. It is obvious that the narrator knows nothing about rowing or how to even pronounce Lucerne. That really bothered me. The story is interesting but I could have used with a bit more details about the humans in it. I was not able to get a sense for the personality of Grobler.

The material is certainly interesting, but the narrator for the audiobook appears to have been seconded by the Monty Python team. I'm listening to this as I push out steady state miles on the ergo and I've nearly capsized a few times, the mispronunciations are so hilariously bad. Where is that Great Lake? Ont-AAAhrio of course! Who is the legendary British Double sculler? Chris Baaah-Yeah-Loo. The British Minister for Sport under Thatcher? Colin Moy-A-Cneean. And the famous GDR sports institute was in Leap-zig? The boat manufacturer "Em-paTcher", the regatta at LuKern; Thh-Omi Keller; Thomas Lanja; Los Angeles medalist Richard Budd-Get (seriously, you have to work really hard to get that one wrong). If there's a route from A to B in pronouncing a name, he travels via C and D. Letters get thrown in, dropped out, swapped around. A few more: Harry May-Han, STEVE Bowden, HARRY Herbert, May Drysdale, St Katharina’s dock, bow seat pronounced as in bow-tie Impeverous for impervious Partitioned vs partisan Pen-REEth vs Penrith CAN-BEERa Kleidiascopic I finally realized that he's just doing it to wind up the audience when he mispronounced: US President, Ronald REEgan and, for a coup de grace, repeated throughout - and, of course, featuring rather frequently - "Matthew Pin-Sett".

Simple in its complexity

I really enjoyed this book, wish there was more! Great read, simple to understand. To be able to condense so much information in an entertaining way was awesome Definitely recommended.

Narrator should learn how to pronounce key names and places. To listen to “Pin-sent “‘throughout the book was painful. Not to mention Lucerne as Look-erne among many others! Painful. Too much repetition in the book. Probably great for rowers keen on all the stats

Grobler is the greatest - this book is not worthy

The narrator hasn’t a clue, and makes juvenile pronunciation errors and often. The book becomes a monologue of events rather than insights into Grobler. Nevertheless if you love rowing, you won’t stop listening

More a list of the great man’s achievements than a biography.

Poorly read with some clanging mispronunciations. I was hoping for more insight into the man himself rather than just a commentary of the crews and races he was involved with. Very disappointing.

If you are a rower, this story is a must listen. It’s been fantastically researched and put together. However the chap doing the reading will leave you wanting to tear your teeth out. His pronunciation of fundamental rowing terms and locations (lookern!!!) is simply not good enough and let’s the story of one of sports greatest ever coaches down badly.

Great if you love rowing

As a lover of rowing I thought this was a great listen. Some of the pronunciation leaves a little to be desired but doesn’t distract from a great story

If the narrator learned to pronounce a number of words correctly eg Pinsent is not pronounced pinsett ....