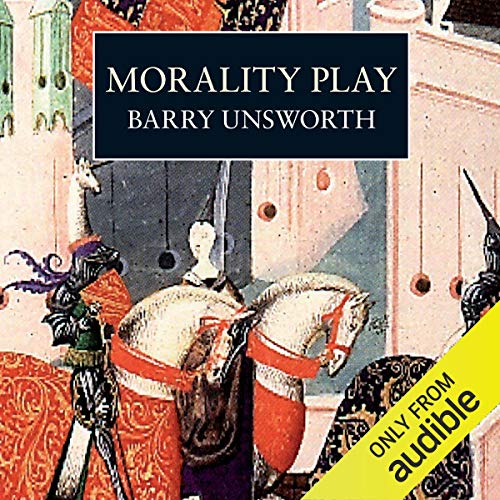 It is the late 14th century, a dangerous time beset by war and plague. Nicholas Barber, a young and wayward cleric, stumbles across a group of travelling players and compounds his sins by joining them. Yet the town where they perform reveals another drama: a young woman is to be hanged for the murder of a 12-year-old boy. What better way to increase their takings than to make a new play, to enact the murder of Thomas Wells?

But as the actors rehearse, they discover that the truth about the boy's death has yet to be revealed.

What listeners say about Morality Play

It took a few chapters to get into the story. I am so glad I persevered! The writing is brilliant - a great plot with interesting, unusual characters. A wonderful look at life during the middle ages from the point of view of a group of traveling players. The narration speeds along! I usually have to listen at 1.5 speed or faster but this was a breathless, amazing tour de force. Two great talents have created a wonderful entertainment for a discerning audience.

On of Barry Unsworth's best novels and all the better for being short and punchy. It plunges you into a very believable medieval worldview and meditates on the relation between art and reality, while also spinning a gripping murder mystery tale at the same time. Michael Maloney's reading is a true performance - he speaks in a breathy, hyperactive voice that captures the novel's intensity extremely well.

A really terrific short book. Engaging reader performing a wide variety of accents and characters. Loved thinking about the development of the dramatic form, and the many different types of language required.

Would you listen to Morality Play again? Why?

The breathless narrative by a first person storyteller.

The opening scene. Story told in first person brings you right into the forest watching the other characters in medieval England. Economically told. Cinematic.

A short novel that manages to have you engaged with several characters as they dance on the edge of danger's cliff while unraveling a mystery.

Wonderful story as always from Barry Unsworth and a superb performance.
I can only hope that Mr. Unsworth’s book will be eventually be available in audio.

I have now listened to this audiobook a 3rd time. I've read the novel twice. Mr. Unsworth is that rare writer who makes me read and listen in awe. His work is astonishing. (Also highly recommend his novel, Sacred Hunger)

This is a very good historical mystery around time of Black Death in Europe. There is a murder mystery coupled with a tale of a traveling acting troop and a "defrocked" clergyman who joins up and gets involved in acting and writing plays, acting being one of the sins he is not to participate in normally. But he is drawn to it slowly and suffers some mental anguish over his choice to remain with them. There is more to his story that adds weight to whole novel. I like the atmosphere of the story taking place in medieval times, but more importantly it plays with the idea of how morality and religious dramas grew into actual dramatic creativity freeing themselves from shackles of repeating same old biblical tales etc. I always find items of that nature interesting: the speculation on how drama and literature developed from greek drama or earlier mythic rituals, into mystery and morality plays, and into drama as we know it today.

"Morality Play" has a provocative premise: what happens when a medieval acting troupe has the audacity to abandon telling the age-old, church-sanctioned stories and, instead, create its own play from a sensational current event and the “lives of the people.” Because the narrator rushes through this reading with breathless urgency, half-whispering and mumbling the words, it's difficult to understand and annoying to try to follow it. I wanted to be intrigued by it, but I was just confused.

I continue to be amazed with Unsworth’s creative genius for an epic storyline, as well as, the language to flesh out and breathe to life.

Reader is getting carried away

This might be a good story and I was just unable to tell because I was so distracted by the hyper delivery of the reader. I couldn’t take it and had to bail.

Would you listen to Morality Play again? Why?

Yes. Even though you know the outcome I feel that re listening you would find nuances you missed the first time around as the story sweeps you along at a fast pace the further you go through the story. I couldn't put it down. I needed to find out what happened and was listening until midnight on one occasion.

I enjoyed the well written, well rounded characters and the interaction between them. I enjoyed the descriptions of the formulation of the play, and the way in which the body language of the characters was construed so that the reader could follow their meaning.

What does Michael Maloney bring to the story that you wouldn’t experience if you had only read the book?

for me Michael Maloney truly embodied the character of Nicholas Baker as well as the voices of all the other characters.

The second performance of the play where they had gathered more information about what really happened . Where the action in the play and characters they were performing took them over and the actors became the people they were playing without the need for rehearsal.

The time in which the book is set is stated within the synopsis of the book but is never made clear in the narrative itself.

I loved this book and its performance. The setting is beautiful and the power of description exquisite.

Before I listened I was disappointed it wasn’t David Rintoul reading, as he did for Sacred Hunger and The Quality of Mercy. I needn’t have worried as Michael Maloney, a narrator new to me, did an excellent job.
This is high quality historical fiction, well researched, original and surprising.
I don’t know why I get fooled into hearing sloppy potboilers, when there are books like this about!