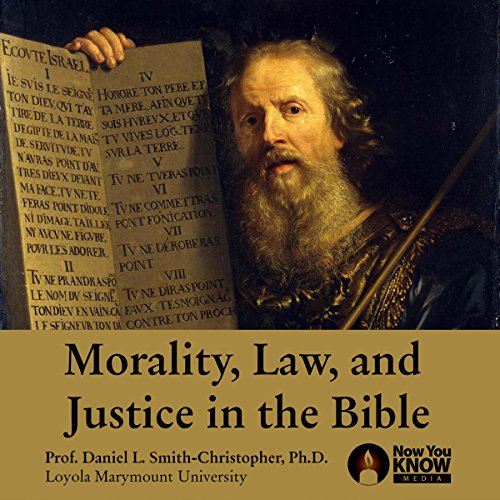 Morality, Law and Justice in the Bible

Understand what the Bible says about morality, law, and justice.

Begin by exploring modern ideas of justice and morality and how these concepts are similar to and different from biblical notions.

Examine the meaning of the classic term for justice, "Mishpat", and see how law, morality, and justice are discussed in different types of biblical literature, from the early Hebrew writings and traditions through to the New Testament era - over 1,000 years of biblical history. Consider Mosaic Law, as expressed in the Torah (the "Books of Moses"), and then examine how the "legal system" of ancient Israel actually functioned.

Discover why the kings and aristocracy of ancient Israel incurred the anger of these prophets, who were especially furious about the mistreatment of the "widow, the orphan, and the foreigner" in Israelite society. What do these three categories of society refer to? See how ideas about justice go through interesting changes as the Hebrew people face their later biblical existence as a minority under massive world empires (Assyria, Babylon, Persia, Greek, and finally the Roman Empire in the New Testament era).

Finally, consider issues surrounding the "problems" of the teachings of Jesus and Paul in relation to Roman rule and the Christian community, especially when everything changes in the fourth Century AD and Christianity becomes itself a "religion of Empire".

While the Bible gives no simple definition of justice, nor does it dictate a specific societal system, it certainly provides many key ideas about morality, law, and justice that are provocative, often controversial, and ultimately deeply hopeful about what the Bible suggests are God's intentions for human society and the common good.

What listeners say about Morality, Law and Justice in the Bible

I am no Torah scholar. This professor has a specialty in the Old Testament, and spends much time there, tracing themes of justice, particularly social justice. I was surprised how humane many of the rules stated there were (though I'm not sure how well that was executed on the ground), even compared to our "enlightened" legal systems today. One can certainly see the lineage to our laws today. He also then walks the discussion up into the New Testament. This was well worth my time.