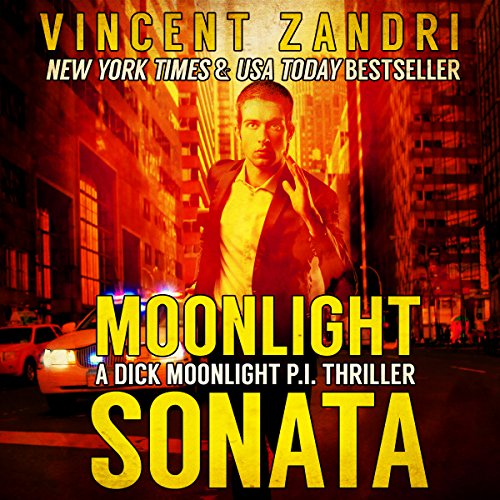 By: Vincent Zandri
Narrated by: Andrew B. Wehrlen

"Zandri's prose flows effortlessly as usual, making it a fast but satisfying read. Many crime novels that attempt this speed lose something in the process, but it's a testament to Zandri's talent that Moonlight Sonata never feels empty." (Ben Sobieck, Crime Fiction Book Blog)

Sometimes a man who goes missing should stay missing!

From New York Times and USA Today best-selling author Vincent Zandri comes the next installment in the internationally acclaimed Dick Moonlight, PI series. For fans of Charlie Huston, Don Winslow, and Harlan Coben, the Dick Moonlight series is pure noir, tossed against a backdrop of hard-boiled action, with some romantic/suspense thrown into the mix.

When a hotshot literary agent by the name of Suzanne Bonchance lures Richard Moonlight into searching for her missing star client -the boozing, womanizing Roger Walls - the private detective finds himself waist-deep in a whole lot of trouble. But when a sexy, young writing MFA student who claims to know Walls comes to his rescue, Moonlight not only becomes smitten with her charm, he also finds himself falling in love with a girl he barely knows. As the trail for Walls narrows and the truths about everyone who has ever been involved with Roger Walls are revealed, Moonlight finds himself wanting to run away as fast as his legs will take him. One thing he can't outrun, however, are bullets.

If you’ve listened to books by Vincent Zandri before, how does this one compare?

Narration is better then the story but that is like saying most Presidents are better then Trump.

Only if I needed a long sleep.

This is book seven in the series but only my second listen. Moonlight is an interesting character and with his former-cop-attempted-suicide background, the storylines and supporting casts are very inventive.

I loved the narration! Moonlight, himself, is a simple enough voice to characterize. When you add in other cops, Russians, larger than life authors, and a host of other shady characters, well, hats off to the narrator.

I liked the story and absolutely did not see that ending coming. That was fun.

I will definitely listen to more of the Moonlight saga.

I loved all of the twists this book had. The characters were unique and the storyline original. Without giving away spoilers, one scene is taboo, but remember this is fiction. I thought the narrator did a great performance with various characters and their accents. I have enjoyed listening to several books by this author and narrator and will continue to listen to more. I requested this review copy audiobook and have voluntarily written this review.

Can Be A Standalone

This was a good story that kept my attention. It was steady paced with interesting characters. The narrator did a great job bringing the story to life. This was my first of this series and I definitely am interested in more

Moonlight agrees to find a missing author. What he finds is murder, drugs, the Russian mob, and a million dollars . The Moonlight series are always great fun. A few curse words, but, always where you would expect someone to use them.

I entered this series with this book. That didn't feel like a detriment, though. I really didn't feel like I was missing too much. The dialog was pretty good, and voiced well by Andrew Wehrlen. I'd definitely be open to more.

Richard Moonlight, the sharp, witty, womanizing Private Dick. This episode in the journal of Moonlight P.I. cases has the intrepid detective looking for famous author Roger Walls. Moonlight’s romantic indiscretions will get him in trouble once again, as I have a feeling it usually does. Between the writer and his less-than-ethical agent, several cans of worms are opened forcing Moonlight to be at the top of his game in order to stay out of jail. The story is fast-paced and the action keeps the pages turning. This audiobook was given by the author, narrator, or publisher at no cost in exchange for an unbiased review via Audiobook Boom.

Who's up for some breakfast?

Just knowing the book is by Vincent Zandri sets this reader's pulse pounding. Throw reality on of the window and look out for fast action, slick written one liners and, in the case of P.I.Richard Moonlight, a rattling good story with humour ousing from every page.

Richard (Dick, an appropriate nickname given his attraction to the ladies) used to be a cop until he made himself unwelcome. Now he's private, and he's written a book - autobiographical fiction based around one of his earlier cases - Moonlight Falls. When one of the most respected agents in the country, now also gone independent, contacts him to find one of her best selling authors, Roger Walls, gone missing for over a week, Rick sees an opening to introduce his own manuscript.

But, of course, nothing is quite what it seems.
Great characters, great p!ot, great fun. And made all the more so by narrator, Andrew Wehrlen's interpretation of Moonlight himself, fast talking and sarcastically witty, and his separate voicing of all the other protagonists. Great pairing of text and narrator.

I received a complimentary copy of Moonlight Sonata, at my request, from the rights holder, via Audiobook Boom. Thank you so much. I have really enjoyed this series so far: how long Moonlight can continue is not known - he has an inoperable bullet fragment in his brain which, if it moves, will kill him instantly. So, living close to sudden death, he makes the most of his life. His book, Moonlight Falls, is also available.

Another home run from Vincent Zandri

Another wonderfully crafted PI Thriller from an author that is definitely climbing my top authors list.
This is the first in the Dick Moonlight I have listened to and as a standalone it stands on its own feet. The story starts out gentle and proceeds to deliver a well paced character driven story. There are some twists I never saw coming and some that were easier to see but only serve to throw you off others.

The narration again is matched beautifully to the story. Andrew B Wehrlen has a voice that is both easy to listen to whilst delivering the tone and emotion that matchesd the book at every moment.
Characters are all distinct and have their own feel.

If you are looking for a good thriller this is a great listen. It is not a long book but keeps you involved the entire way throughout.

I was given this free review copy audiobook at my request and have voluntarily provided this impartial review.