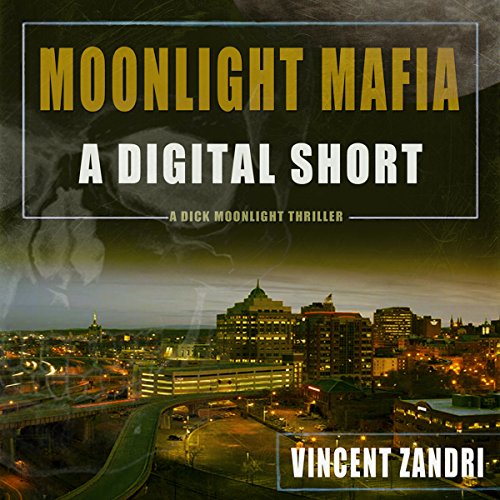 Richard 'Dick' Moonlight is back!

In the best-selling Moonlight Falls (RJBuckley, 2009), he barely survived his own suicide attempt, not to mention numerous attempts on his life from a gang of Russian thugs operating an illegal organ harvesting operation out of a Saratoga Springs restaurant. Now the former Albany Police Department detective is forced to go through life (or in some cases, near-death) with a piece of .22 caliber bullet lodged in his brain. Since it's pressed up against his cerebral cortex, it often affects his decision making ability. On occasion it can cause him to pass out or erase his short term memory. He could also die at any moment should the bullet suddenly shift. In a word, Dick Moonlight is one train wreck of an individual.

In this digital short, the too often unemployed private detective is hired by an anonymous client ('John Smith') to bring down a Mafia wise guy who's using a used car lot as a front for illegal gambling activity. At least, that's what Moonlight is led to believe. According to the job description, he is to answer a want ad for a salesman position at the same used car lot and thereby secretly infiltrate the illegal operation. Sounds like a piece of cake.

Problem is, when Moonlight heads over to the used car lot to answer the ad, he decides to pay a quick visit to the bar next door and have a couple of quick "Jacks" to loosen himself up. But when he opens the big heavy door on his late father's pride and joy 1978 "Cadi" hearse, it gets away from him and dings the passenger-side of the brand spankin' new black Dodge Ram parked beside it. What Moonlight doesn't realize as he pretends to ignore the Ram's damage is that the door he just dinged belongs to his new would-be boss. And his would-be boss is not only in the Mafia, he's no stranger to torturing and killing people for fun!