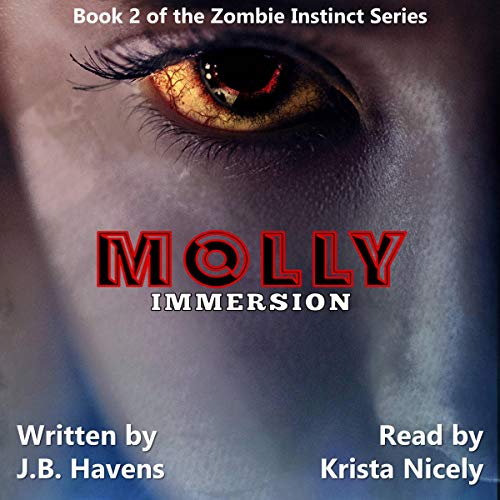 Molly Everett is back in the second installment of the Zombie Instinct series. She's on the run from Kelle, the teenage zombie from hell who's determined to eliminate her competition and begin her reign as the supreme Alpha.

After escaping the lab, Molly heads toward her hometown and away from Kelle. Caught between two worlds, she struggles to retain the last remaining vestiges of her humanity. Inexplicably, Molly finds herself the unlikely protector of two children, who are both terrified and amazed at her abilities.

Meanwhile, Kelle has gathered a horde of undead followers as she continues tracking Molly southward, killing and devouring every human they stumble across along on the way.

Will Molly's decision to suppress her need for nourishment leave her too weak to fight Kelle and keep the children safe? Only her zombie instincts can save them all.

What listeners say about Molly: Immersion

This book kept me on the edge of my seat! I absolutely loved this story. Would definitely recommend for somebody who wants an awesome, action-packed zombie story that kicks butt!

Gripped from page one to the end, it also had me dreaming Zombies, the usual kind and these even scarier Alpha ones. The ending had me nearly hit my ceiling I jumped so high. Reading this the descriptions and events feel real, the author has done a fabulous job with details and the story managing to keep the momentum throughout as well as the consistency carrying over from the previous book. Awesome read.

Not a bad story, a lot of reflection, zombies, not a lot of resolution. I enjoyed the book, but I was hoping for a completion to the series. Now I have started another series that isn't complete. I have high hopes for where this is going and I hope the future installments come soon, I hate leaving a series unfinished.

a new twist on the zombie apocalypse! I love the idea of a story from a zombie's perspective, even better with it being an alpha zombie! Most forms of zombie apocalypse stories are a bit played out... there's not much you can do with the end of the world... at least that's what i thought! J.B. Havens shows us that it's not played out yet! this new apocalyptic twist is awesome and fun! i can't wait to hear more!

Requested a free code from a web site, no strings attached.

I really enjoyed the book and narration! It is a different take on the zombie survival genre. The main character is an Alpha Zombie that has retained her intelligence when she was turned. Now she has enhanced strength, speed, senses and healing. She is being hunted by another Alpha, Kelle, who is stronger and can control other zombies.

Warning the book ends on a cliff hanger! I just checked to see if I could purchase the next book in the series but it isn't available yet. Can't wait to see what happens to Molly and Kelle!

If you found this review helpful, please indicate so. Thank You!

The audiobook was given to me for free in exchange for an honest review.


Just like the last book, this one is on point. Right from the beginning, you are hooked all the way down to the last word. I hope there's a third installment. Definitely going to be on the lookout for it!!

I started this book without reading the first one in the series. I wasn't sure if I mussed important details in the first book or not but it was easy to read and pick up that Kelle and Molly do not like each other. There were a lot of action packed moments with gory details that had me on the edge of my seat not knowing what was going to happen to Molly at times.

The ending has set up for the third book in the series nicely. I enjoyed listening to this book because it wasn't your usual zombie book told from humans point of view. Instead its twists the script and is told from the Alpha zombies point of view or Queens as they are called also.

I highly recommend this audiobook especially if you are looking for one that breaks away from the normal zombie thriller.

I received this audiobook review copy at my request and have voluntarily left this review.

Molly is a badass!

I can’t wait to read more of this series! We got to learn a little bit about the Alphas and their motivation for why they do what they do. The narrator’s voice capture’s the character’s perfectly. Really enjoyed the book — can’t wait for Kelly to get what’s coming to her!