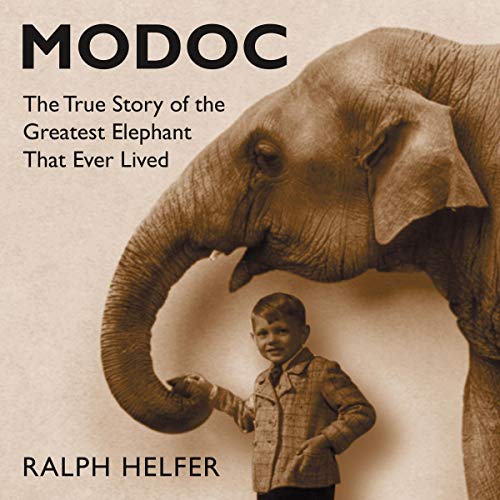 A captivating true story of loyalty, friendship, and high adventure that spans several decades and three continents, Modoc is one of the most remarkable stories ever told, perfect for fans of The Zookeeper's Wife or Water for Elephants.

Raised together in a small German circus town, a boy and an elephant formed a bond that would last their entire lives, and would be tested time and again: through a near-fatal shipwreck in the Indian Ocean, an apprenticeship with the legendary Mahout elephant trainers in the Indian teak forests, and their eventual rise to circus stardom in 1940s New York City. As the African Sun-Times put it, Modoc is "heartwarming...probably the greatest love story ever told".

"Once I started this incomparable story, I couldn't put it down, and I cannot get it out of my mind - nor will I ever. The message of what can be accomplished by training through affection and joy will thrill all animal lovers." (Betty White)

What listeners say about Modoc

Fiction -- Not True as claimed

Children's book. The more I read, the more I realized that there is no way this could possibly be a true story. Far too fantastical. About 2/3 of the way through I googled it and found others who thought the same. It was researched by one of Amazon's reviewers and sure enough it was all a lie.

If you love elephants you will love this story. A true story and a treasure.

This is one of the best books I have ever read. Incredible depiction of love and understanding between man and animal.

I love this story. It's mystical and written with love and see. If any story deserved a movie, it's this one!

Great story that brought tears to my eyes many a time. I did not care for the readers voice-over performance. every sentence is breathy and over dramatized, but at times when the storyline really did call for great drama, I couldn't even tell. If you love animals, this is a must-listen, but be prepared to cry! I loved the story, but do wish the author had provided a timeline in years, of Mo's life.

Truly astounding. Such love! A true new love and adoration for elephants. It is difficult to fathom one person (and elephant) could experience so much in their lifetime.

An inspiring true story of a man and his elephant. The things they endured are well articulated and draw in the reader to want to know more, whilst pulling on their empathy. What an inspirational story of love and hope.

Full of love and emotion, I cried several times and wonder what on earth can follow this beautiful and engaging story.