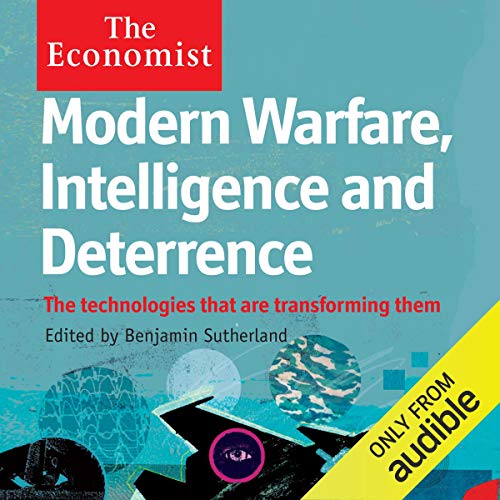 Modern Warfare, Intelligence and Deterrence: The Technologies That Are Transforming Them

The pace of technological development moves quickly, so how to stay current? One option is the comprehensive Modern Warfare, a collection of articles about defense technology that were originally printed in the Economist. In clear, sedate tones, narrator Christopher Oxford presents an overview of everything from drone warfare to the evolution of war in cyberspace. The result is a primer on the power of technology to alter the ways we wage war, and an exploration of the potential ethical ramifications. Listeners interested in the defense sector, or in technology in general, will find this exhaustive catalogue of developments highly intriguing.

For those who want to be smart about our ability to wage war and to protect ourselves - and where much of the world's billions of dollars on defence spending goes. The Panzerfaust-3, a German shoulder-fired heat-seeking antitank missile, can punch through a metre of solid steel-far more than any armoured vehicle could carry. The MPR-500, an Israeli precision bomb, can hammer through several storeys of a building and explode on a chosen floor. These and myriad other military and intelligences technologies are changing the world.

This Economist book describes these emerging technologies and places them in the larger context of today's politics, diplomacy, business and social issues. It shows how efforts to win wars or keep the peace are driving enormous and multifold technological advances. Broadly speaking, defence technologies will continue to provide enormous advantages to advanced, Western armed forces.

The book is organised into five parts: "Land and Sea"; "Air and Space"; "The Computer Factor"; "Intelligence and Spycraft"; and "The Road Ahead", which examines the coming challenges for western armies, such as new wars against insurgents operating out of civilian areas. Comprising a selection of the best writing on the subject from The Economist, each part has an introduction linking the technological developments to political, diplomatic, business and other civilian matters. For anyone who wants to know just how smart the global war, defence and intelligence machine is, this will be revealing and fascinating reading.

What listeners say about Modern Warfare, Intelligence and Deterrence: The Technologies That Are Transforming Them

Would you try another book from Benjamin Sutherland and/or Chistopher Oxford?

Would you ever listen to anything by Benjamin Sutherland again?

What does Chistopher Oxford bring to the story that you wouldn’t experience if you just read the book?

He was fine....the material was the outdated info was the problem

What character would you cut from Modern Warfare, Intelligence and Deterrence: The Technologies That Are Transforming Them?

The book was simply a reprint of OLD articles on "modern" warefare. The information was from 4 to 7 years old. When writing about "current" warfare the book being sold should be "current".

eye opening and in some ways terrifying

With a bit of updating and organizing it could be much greater.
So much is changing...

Generally I found this book fascinating, being a military history buff for a while. Narration was engaging, as was the writing. However, my only complaint is the table of contents. I don’t know if it’s just me, but I’ve noticed that the headings seem to be repeating.

Best Way To Be Informed

The best way to be informed on a subject is to research multiple perspectives on the same subject & that's exactly what this presentation accomplishes with numerous articles by various authors. Having just completed Cyberspies by Gordon Corera I was looking for other perspectives on the latest in technological defense development.

This book helped solidify a more thorough grasp of how others see the same issues & also introduced many new projects not present in other books. Very helpful, worth the time if you're objective is to understand & discuss intelligently the scope & dynamics of modern day national defense developments.

Some of the articles seem a little dated. Overall though it was an interesting listen, somewhat hampered by an obnoxious narrator. His pronunciation of 'decade' (dick-ayde) became really grating.

Nothing new but a miss mash of old articles.

old stories rehashed. expensive for what it contains. Some interesting nuggets hidden within it. avoid

This is a surprisingly interesting series of articles on the latest technology in warfare. Some of the articles are a few years out of date, and some repeat each other a little, but overall this was an interesting listen in the car for those who are interested either in technology or the latest military methods.

Really quite an interesting collection of articles. I had no idea about some of the technical aspects of the weapons and defense systems. Exploding armor for tanks was really interesting.