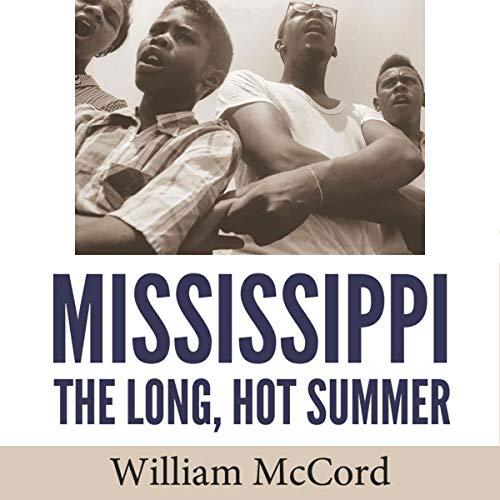 In 1964, sociologist William McCord, long interested in movements for social change in the United States, began a study of Mississippi's Freedom Summer. Stanford University, where McCord taught, had been the site of recruiting efforts for student volunteers for the Freedom Summer project by such activists as Robert Moses and Allard Lowenstein. Described by his wife as "an old-fashioned liberal," McCord believed that he should both examine and participate in events in Mississippi. He accompanied student workers and black Mississippians to courthouses and Freedom Houses, and he attracted police attention as he studied the mechanisms of white supremacy and the black nonviolent campaign against racial segregation.

Published in 1965 by W. W. Norton, his book, Mississippi: The Long, Hot Summer, is one of the first examinations of the events of 1964 by a scholar. It provides a compelling, detailed account of Mississippi people and places, including the thousands of student workers who found in the state both opportunities and severe challenges. McCord's work sought to communicate to a broad audience the depth of repression in Mississippi. Here was evidence of the need for federal action to address what he recognized as both national and southern failures to secure civil rights for black Americans. His field work and activism in Mississippi offered a perspective that few other academics or other white Americans had shared.

Historian Françoise N. Hamlin provides a substantial introduction that sets McCord's work within the context of other narratives of Freedom Summer and explores McCord's broader career that combined distinguished scholarship with social activism.

What listeners say about Mississippi: The Long, Hot Summer