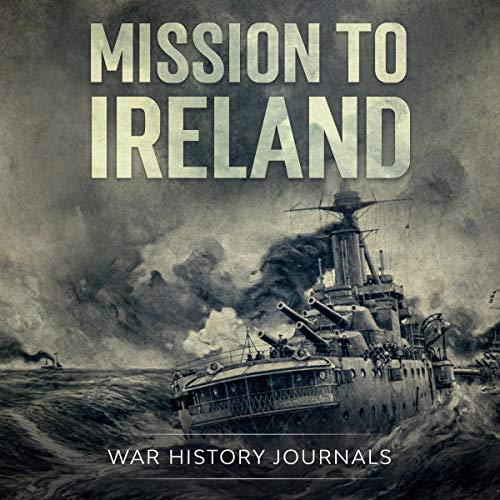 A daring captain. A ship full of weapons. And a sinister plot that could cripple Britain.

In the heart of world war one, a devious plan devised by the German navy led to Naval Officer Captain Karl Spindler embarking on a perilous and secret mission. His task - to deliver German weaponry to Ireland and spark what would become the Easter Uprising.

Departing from Norway with a disguised ship, Spindler undertook a perilous mission with a small crew and a hold full of explosives. If he succeeded, he could unleash a threat that would cripple the British war effort. But if he failed, a prisoner of war would be his fate....

Uncover a thrilling true story from the depths of world war one. Told with heart-pounding detail that brings the lesser-known stories of the war to life, Mission to Ireland delivers a thrill a minute. You don’t need to be a history buff to enjoy this one.

What listeners say about Mission to Ireland

This was different in that it was from the German point of view. It was good to see from this angle & realise they thought as the Allies did in regard to evading & escape. WW1 was fought as a “gentleman’s” war. Great story and performance.

I liked the fact that this is a true story.

An Often Forgotten Part of World War I

This is the second volume of the War History Journals that I have read and their decision to add an introduction and afterward that helped to place the events of the book in its historical context greatly enhanced the utility of the volume. The rest of the book is written in the first person and purposefully comes off as historical fiction as War History Journal strives to make history more accessible.

I enjoyed it, learning about a German effort to supply the Irish with weapons for the coming Easter Uprising. The effort to sneak their cargo ship into Ireland is quite dramatic and informs the reader about English precautions to keep just such a thing from happening. It would be easy to forget that these were actual real events being depicted because the whole book reads like a spy thriller complete with a prison escape.

It’s hard in this format to evaluate the history itself. There are conversations reported and the first person narrative style prevents the reader from having any real sense of what is invented for dramatic story telling purposes and what is strictly true, but I think that it is still a very effective way to give people a sense of the challenges inherent in the mission and to learn a lot about a seldom discussed part of World War I.

I loved this audio book. A great world war 1 story told from the view of a German naval officer.
His mission and capture then his attempt at escaping.
A brilliant read.
I received a free copy of this audio book at my own request and voluntarily leave this honest review..

A tale of a German war hero

We don’t get too many of these. Most of the WW1 and WW2 history stories are of the allies or overall battles in general. Very rare to come across the tale of a German war hero. Recognized not only by the Germans, but by the Irish and the Irish Americans as well. This is a gripping tale of this captains story sailing from Germany with guns for the Irish rebellion and everything that happens from then on. Loved it! I was voluntarily provided this free review copy audiobook by the author, narrator or publisher

Interesting story I had never heard of.

This is the story of smuggling arms to the Irish during WW1. I’m embarrassed to say I knew nothing about this. The level of determination the Capt. shows before and after capture is admirable. I was rooting for him towards the end but do not want to give away how it ends. The story moves quickly too. I could easily imagine this story being drawn out into a 6 or 7 hour audiobook. I like that it is shorter, it keeps moving and jumps from set back to lucky break one after another keeping things going. Very exciting for an audiobook, there is really no lull. I very much enjoyed this book. Being a history geek and especially fond of Naval stuff this was right up my alley. If your interested in those areas or like prisoner tales you will definitely like this one. The narrator did an excellent job as well. He is well suited to this style of story, I felt he captured the narrative well and made me feel like he truly was the one telling the story. First rate job.

I was given a copy of this book at my request in exchange for a fair and impartial review.

A fascinating true story of a brave Captain and crew evading the British Navy in 1916, there are few account for this type available to listen to and I found this excellent and informative with lots of detail of ships, sailors and attitudes of this period , a great adventure story with an excellent narrator but who has problems with the pronunciation of some names and places, Nottingham becomes Nottington a copy of times but otherwise this is a great story. I received a complementary copy from Storyorigin and an leaving a voluntary and honest review