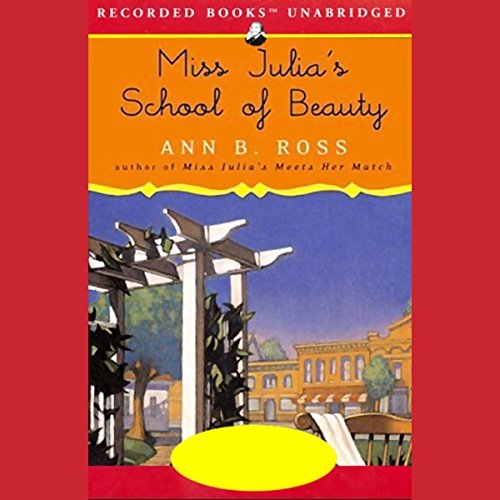 By: Ann B. Ross
Narrated by: Cynthia Darlow

With her phenomenally popular Miss Julia series, author Ann B. Ross has graced the New York Times and other best seller lists on her way to capturing the hearts of her many dedicated fans. Miss Julia, a graceful Southern lady with impeccable manners and a penchant for problem solving, has become a beloved heroine for countless admirers.

Hazel Marie, former lover of Miss Julia's late husband, needs assitance in staging a beauty contest to determine who will reign as Miss Abbot County Sheriff's Department. Enter Miss Julia. She has plenty of advice for the contestants about maintaining their poise, showcasing their charm, and perfecting their stage presence. But as she does her best to help the women, Miss Julia is forced to face concerns over her complicated relationship with her gentleman friend, Sam.

Refreshing and comical, Miss Julia's School of Beauty is another good-natured gem from Ann B. Ross.

"The Miss Julia series is an audiophile's dream; the novels seem to have been created just for audio." (The Denver Post)

What listeners say about Miss Julia's School of Beauty

As always, Miss Julia takes us for a fun tride twisting this way and that with all the great regular characters and quirkie plots. I can always count on Julia Springer and gang to keep me interested and smiling.

This is one of my favorites in the series. Miss Julia and her "extended family" have become a part of my life....seriously!! Love you Ann Ross. You absolutely may not retire....ever!!

What would have made Miss Julia's School of Beauty better?

I really loved the 1st book and was excited about the next one I could find on audio....this was it. Unfortunately the narrator changed and this changed the entire story for me. I did not like the way the narrator portrayed the stars in this series and I tried really hard to get past it. I had to stop half way through the book and will not order any more since the narrator remains the same as this one.


What do you think your next listen will be?

What character would you cut from Miss Julia's School of Beauty?

I know there are probably many people out there who won't agree with me, but I found this book incredibly annoying and the plot line silly. The reader's Southern accent made my skin crawl (and being from Georgia, that takes alot), and I found the plot line about Miss Julia's marriage to be unrealistic - I felt like the character was completely from the 50's, but set in present day (and to me, not in an entertaining way). I've been trying for a month to listen to the whole thing and still have over half of the book to go. I seem to always find an excuse not to listen to this book/reader - I have a new CD that I like, or the dog needs attention, or the toilet needs cleaning...
Try it if you want to, but I would definitely recommend listening to the preview first to see if you can stand the bad Southern accents. I wouldn't recommend this book though.

The story was barely interesting enough to keep me listening to the end. Minimally entertaining.

A little too hard to believe, but fun

In Miss Julia’s School of Beauty by Ann B. Ross, Miss Julia has just returned from her honeymoon after eloping with her former lawyer, Sam, to the dismay of others in her town upset at not being invited to a large wedding. Then, a friend tells Miss Julia that the tabloids are reporting that country music star Sonny Sutton had discovered that his marriage at a wedding chapel in Dollywood was not legal because the preacher did not have legal authority to perform weddings. Miss Julia begins to fear that perhaps her own marriage might not be legal either, and she might have been living in sin! So she kicks Sam out of her bedroom, while terrified that someone in her community might learn her deep, dark secret. So Sam goes on the road to find out the truth behind their marriage.

In the meantime, the sheriff’s department, in an effort to raise money for a second dog for their K-9 squad, decides to hold a beauty pageant. Hazel Marie, the former longtime mistress of Miss Julia’s first husband and mother of his son, Little Lloyd, gets involved as organizer of the event, along with Edda May, who seems to be chasing after Sam and makes Miss Julia very jealous. So Miss Julia gets busy helping with the pageant too. But she gets even more involved when she gets a phone call from Aaron Kincaid, the false preacher, boasting that he has been called by the Holy Ghost and doesn’t need the approval of the state and threatening to tell the world the truth unless his niece wins the beauty pageant. The problem? Ashley is plain and sloppy and, even worse, has dropped out of the pageant! Thus, Miss Julia has her work set out for her, getting Ashley back into the pageant and able to win.

I really loved the previous book, Miss Julia Speaks Her Mind, so my high expectations for Miss Julia’s School of Beauty influenced my disappointment in this one. The parts about the beauty pageant were a lot of fun, but despite the fact that the book’s official description talks solely about the pageant, the majority of the book deals with Miss Julia’s concern over the state of her marriage and paranoia that someone would learn that she had been living in sin with Sam. This part did not resonate at all with me because I cannot understand why Miss Julia thinks that the fraud of the preacher casts shame on her. Her behavior related to this issue seems so strange.

I really loved the narration of Cynthia Darlow, who is so lively that she makes this book much more enjoyable than I imagine it would be reading physically. She has a terrific voice for each character, and she wouldn’t even have to name the person speaking for me to know exactly who the lines belong to. Darlow was the perfect fit for this book.

While I did not enjoy Miss Julia’s School of Beauty as much as the previous book, the author’s enjoyable storytelling style made much of it terrific fun, and though the other parts were less enjoyable, I still enjoyed this book. I certainly intend to get the next book in the series. But because of my annoyance with Miss Julia’s obsession on the state of her marriage, I give this book three stars.

Loved every minute of this series!

What did you love best about Miss Julia's School of Beauty?

A nice easy listen, enjoyable and made me laugh. Loved every one and was sorry when I got the the last book.

I kept listening hoping for the story to really get going. There were some really great characters, but the heroine, Miss Julia seemed to be a simpering fool making decisions out of pride rather than from being clever or crafty. I perceived her to be smart and clever from the description of the book. It could have been truly funny with the cast of characters created by Miss Ross. The narrator did a wonderful job and she was the reason I kept listening, hoping it would get to its point.

I really enjoyed this book and find myself thinking in the southern twang that makes up this book. It took a bit for me to get used to and excited about the older character with such high morals but very quickly I found myself enjoying it. I will say that I think younger "readers" may find it a bit too stuffy. Again, I really enjoyed it and plan on getting the whole series.