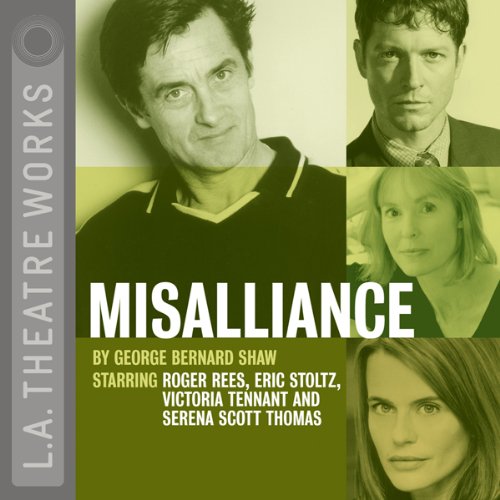 Shaw's 1909 country-house comedy explores the clash of social classes when an aristocratic Edwardian wishes to marry the daughter of a bourgeois underwear tycoon. In this pleasant production, the acting is consistently fine, with Roger Rees, Victoria Tennant, Serena Scott Thomas, Eric Stoltz, and others forming a polished ensemble. The abridged version of the original text, while wisely leaving out some arcane references, at other times cuts too deeply into some speeches. Allowing the play to run more closely to two hours likely would have preserved more verbal richness without losing the fizz created by the wonderful cast.

Taking place on a single day in May 1909, a self-made millionaire and his family invite their future nobleman-in-law for a visit to their estate in Surrey, England. In this delightfully clever play, issues of gender, class, politics, and family are all targets for Shaw's keen wit.

What listeners say about Misalliance

Well done. This is less heavy-handed in its social commentary than much Shaw. The send-ups are funny. The audio is very well done and helps you visualize the play and the characters.

Not serious in many ways (kind of like Wilde in being very clever about serious subjects). Women's rights, social climbing and privilege, the self-righteousness of the lower classes, masculinity, and several other still-current stereotypes are sent up in this sliver of a plot.

Several friends who often differ in their tastes have listened to my copy with me, and all were delighted.