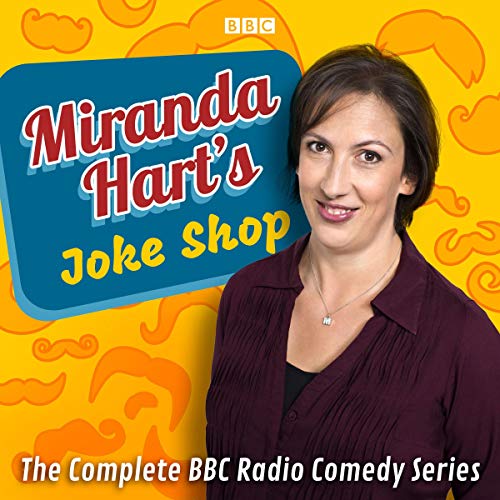 Miranda is an unconventional woman. She’s six feet tall, self-conscious and posh. And is frequently mistaken for a man. She’s also invested her inheritance in a joke shop that she runs with her friend Stevie while trying to deal with her outrageously embarrassing mother.

Though surrounded by chocolate willies, Miranda is determined to suss out what it takes to be a girly girl and to not look a complete idiot every time she meets the gorgeous Gary.

Miranda Hart’s Joke Shop - first broadcast on BBC Radio 2 - is written by Miranda Hart (Hyperdrive, Absolutely Fabulous, Lead Balloon), with James Carey (My Family, Think the Unthinkable) and Simon Dean (Not Going Out). It was the inspiration behind the hit TV show.

Was disappointed because it was just a repeat of the first joke shop. Still funny as heck if you haven’t listened to the first. Miranda Hart always good for a belly laugh.

What I call 'funny'

It's such a funny series, my 12 year old loves watching the series with me, she loves the slapstick humour of Miranda.
I thought I'd try the audio and wasn't dissappointed, I would highly recommend it, my only gripe is it's not longer.

I absolutely adore this, Heart is hilarious on her own however when accompanied by her fellow stars shes somehow even funner! Would recommend to anybody who loves a bit of comedy.

Miranda is on of the funniest woman I've ever watched, I love this show either listening to it or watching the tv show. I cant even tell you how many times i have listened/watched lol! The cast are absolutely fantastic...
what more can I say but Brilliant!