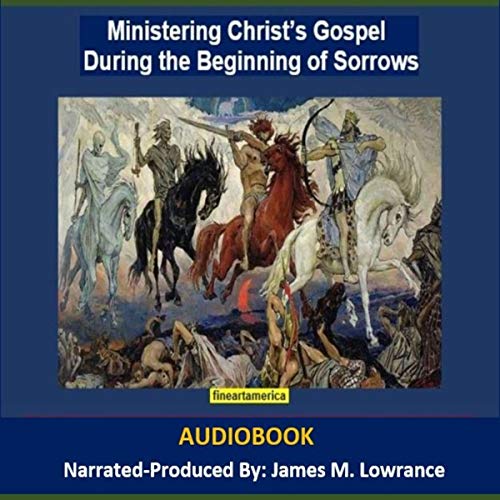 Ministering Christ’s Gospel During the Beginning of Sorrows

Ministering Christ’s Gospel During the Beginning of Sorrows

Christians and even some non-Christians recognize we are near the very beginning of "the great tribulation". The beginning events, that lead to this seven-year time period of both God's and Satan's final wrath, is called "the beginning of sorrows" (Matthew 24:8).

Several chapters of this book (containing 18 chapters) are dedicated to summations of these events in which Jesus said, "For then shall be great tribulation, such as was not since the beginning of the world to this time, no, nor ever shall be." (Matthew 24:21).

Additionally, chapters include teaching on recognizing genuine and "false teachers" (2 Peter 2:1 and Mark 13:22). Other highly intriguing subjects include chapters on fear and how God defeats our fears, whether caused by virus pandemics or other legitimate anxiety-causing concerns, such as the fear of death.

A couple of chapters are also included on the subject of a teaching called "The Genesis Gap", which helps us to understand how evil gained power in Earth to begin with, and how God has already defeated it, which will become ultimately and eternally apparent to the world very soon. A great book on eschatology (end-time Holy Bible prophecy).