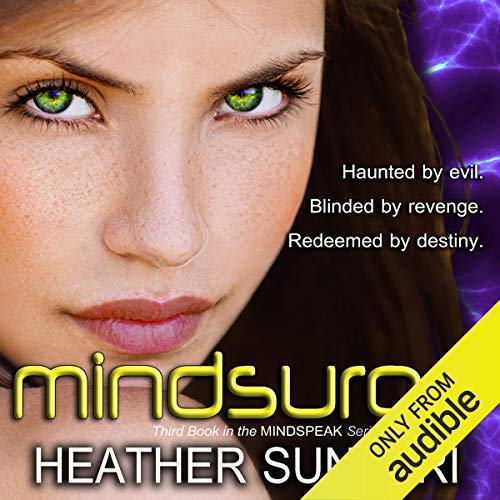 This is the third book in the Mindspeak series.

Wellington Boarding School is home to human clones, an identity that Lexi Matthews once hoped to escape. Shattered by the loss of her father and then her best friend at the hand of Sandra Whitmeyer, the woman from whom she was created, Lexi Matthews is after one thing...revenge.

When Sandra sends a series of threatening "gifts" beginning the night of Lexi's 18th birthday, she determines that Sandra will never stop destroying the lives of her and her friends. Once again Lexi must battle to grasp the complexities of her creation.

As Lexi and Jack discover the horrific details to experiments Sandra is conducting with human life inside her new lab, Lexi decides there's only one way to end Sandra's threats. But following that path could cost her everything - including Jack.

What listeners say about Mindsurge

predictable after the first one... no surprises. lots of hiding stuff to protect someone and then hurt feelings trope

Why do authors write these girls so smart and then when they should use their brains they do ever dumb thing. Really Lexi cutting off Jack was so eye rolling stupid made me cringe. The first two books she made Lexi do smart things, then sudden made her do every dumb action imaginable... ugh. Write a book with a touch of logic

A great ending to the series! A couple of loose ends-I wonder if they show up in the next books?

The narrator (Amy Landon) does an excellent job! Her voice changes are subtle and she does a couple of very mild accents, which are authentic-sounding!

Every time Lexie puts out one fire, a bigger one flares up somewhere else. The web of lies her father, Sandra Whitmeyer and Dr. Dewies have spun keep getting tighter & tighter around Lexie and her friends. Every time she trust someone, she finds out they are part of the conspiracy. The only constant is her boyfriend Jack and even he has secrets. Not truly sure if Jonas is friend or fo, Lexie trys to rescue him, in order to help save Jack. Then, when the one most unsuspected person turns out to be the biggest fraud of all, Lexie doubts if this roller coaster ride ever end.