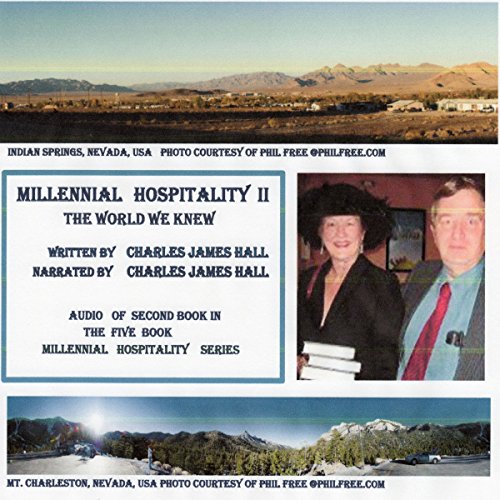 What listeners say about Millennial Hospitality II: The World We Knew

Meet Charlie, he repeatedly tells us that he’s the toughest, most highly intelligent, super-competent person around. He’s the best at everything. The story is interesting, but the audio and narration are terrible. The editing is awful, there is so much repetition that it will drive you nuts. There’s a lot of Bible thumping, but what annoyed me were all of the mistakes, Hall misusing words, and the contradictions. The story is pure fiction and there’s no way that this braggart went to university. Don’t waste your money on this load of bollocks.

can't stop listening. 1 book a day so far. I will finish all 5 this week

Too many red flags to believe his story.

This is a series of 5 books. I came to this after watching a talk from Charles Hall on YourTube and being fascinated by his story and wanting to know more. The first book was indeed fascinating and, despite the rather amateurish recording and editing, the fact its read by Charles himself does add to the experience of what's being told.

But I'm a rational and balanced person. I believe unequivocally that we are not alone and 'they' have been here for millennia. I believe they have spaces set aside for them in places like White Sands and that they do indeed work with our governments, however, I have to ask some logical questions for the sake of reason about these books... the key one being, how does Book Two contain far more in-depth and far more important interactions with these beings than book one? Who would omit these things from Book One only to then reveal them in Book Two? Will the stories become bigger, wilder and even more gripping in books three, four and five? I remember someone talking once talking about witnesses (his housekeepers) in the Michael Jackson controversy.. How, when the money the media offered for stories increased, the more elaborate they became. That's an aside, but the point is simple; Book One sells well and there's money to be made here. Something doesn't sit right about a series of books that alledge something this incredible that don't start with the big stuff first.

I don't doubt Charles' sincerity and that he did indeed experience something, but Charles presents a part of his psyche in this book that seems to indicate a great deal of self praise.. All these things he did, only he could do it.. thank god for you, Charlie.. if you hadn't been here.. etc etc.. It rings more of an insecure man who needs to be needed, but Charle's military service would make him appear to be anything but needy. Still, as I listened to story after story of him being praised by all and sundry, again, something just didn't sit well with me and this sadly all began to feel like someone's fantasy. I wish that hadn't been the case.

The second enormous question is, how did this man, who had repeated contact experiences with the Tall Whites at Range Four not simply come to peace with these beings far sooner? For the most part, he describes every single encounter as being terrifying, despite hearing these beings repeatedly reassure him that he was safe and they were protective of him.. He's literally their chosen one. He repeatedly describes them as 'chalky white' beings.. His understanding of who and what they are never seems to progress beyond these descriptions into any meaningful analysis of who they are, why they're here and where they come from.

As an outsider, I mean no disrespect to Charles, and I'd be interested to hear where these books go, but if they continue to tell bigger and wilder stories that surely should have been included in the first book, then I'll end up wondering how many of these books were just written for the money.

Althought it was described as based on real events, It all does feel like a true story.
It's made me rethink our place in the universe. I like that the author's faith in God seems unshaken even by his experiences.
The audio seems poor in the beginning, but you very quickly get used to it. I really do like it!