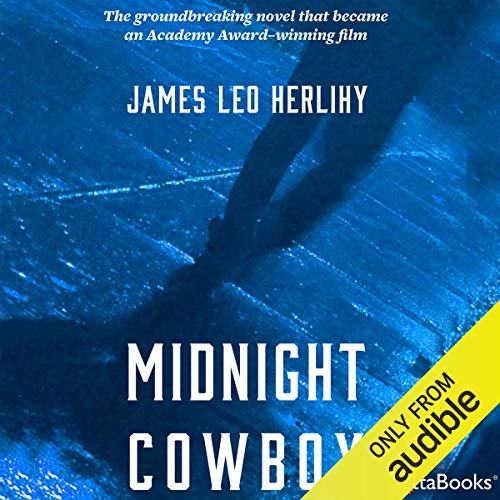 Midnight Cowboy is considered by many to be one of the best American novels published since World War II. The main story centers around Joe Buck, a naive but eager and ambitious young Texan, who decides to leave his dead-end job in search of a grand and glamorous life he believes he will find in New York City. But the city turns out to be a much more difficult place to negotiate than Joe could ever have imagined. He soon finds himself and his dreams compromised. Buck's fall from innocence and his relationship with the crippled street hustler Ratso Rizzo form the novel's emotional nucleus. This unlikely pairing of Ratso and Joe Buck is perhaps one of the most complex portraits of friendship in contemporary literature.

The focus on male friendship follows a strong path cut by Twain's Huck and Jim, Melville's Ishmael and Queequeg, Fitzgerald's Nick Carraway and Jay Gatsby, and Kerouac's Sal Paradise and Dean Moriarity. Midnight Cowboy takes a well-deserved place among a group of distinguished American novels that write - often with unnerving candor - about those who live on the fringe of society.

What listeners say about Midnight Cowboy

The narration was top notch! I loved this book. I didn’t want it to end.

One of my favorites, well narrated

Midnight Cowboy, the movie, was one of my all-time favorites so was I hoping to be able to say the same about the book. And I may have had the narration been better, because of which, I couldn't finish it. I found many of the voices to be annoyingly exaggerated, especially Joe Buck's, which was consistently inconsistent. Joe's voice varied from reasonably well-read, to cartoonishly goofy, to effeminate, at times within the same scene, This became apparent within the first two minutes--I hoped it would get better. I returned the book. Maybe if the narrator had watched the film first...

Utterly brilliant in every respect.

Having just finished listening to this brilliant reading I feel so flat I am starting it again. Everything about the writing is brilliant but the delivery is a piece of magic. The voices all so pitch perfect on accent you can visualise the characters. The nuances with which the narrative develops Joe Buck's being is masterful and compelling. Its years since I saw the film and I don't remember it being as gripping as this. Just mindblowing, funny and sad .

Performance was good, I thought the narrator was good,
This book has not stood the test of time,
This is not no George Orwell, it’s slow boring, might have been good book when written but not now

I’m really enjoying this book - I’m not finished it yet - it’s a sad book IMHO and I now know why it’s a classic. Joe Buck is so naive and I wonder why he doesn’t see obvious things coming…looks for the good in people I suppose. Ratso had Dustin Hoffman’s voice in my head but that’s not a bad thing…the narrator is good…it’s just that I’ve seen the movie!

Well worth my credit!

Absolutley brilliant. This is so well written I couldn't stop listening. It is touching, funny, gritty and real. I had a tear in my eye at the end of the book, I wish it didn't finish. I would have to agree that Hurlihy's book is one of the best written since WW2. MIchael Urie's reading and interpretation is one of the best out there, his voice alone is worth the listen alone, he definately is one of my favorite readers. This has been an absolute gem of a find for me - read it, you won't be disappointed.