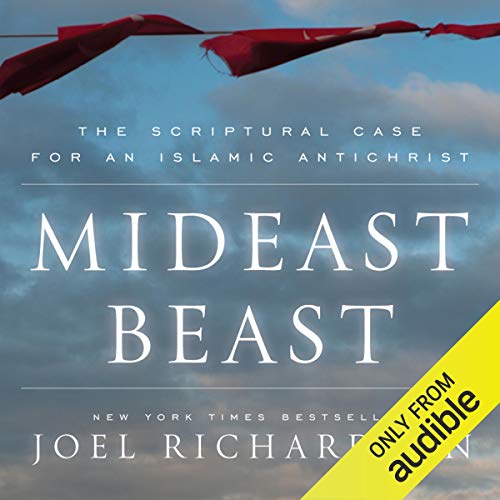 "I am firmly convinced that Islam is the single greatest challenge the Church will face before the return of Jesus, yet most are still either asleep or in denial."

Mideast Beast completes and establishes the revolutionary argument introduced in Joel Richardson's New York Times bestselling Islamic Antichrist, namely that the Antichrist will be a Muslim, whose empire will arise out of the Middle East. Whereas most students of the Bible have long held that some form of humanism or universalist religion would catapult the Antichrist to world power, Mideast Beast: The Scriptural Case for an Islamic Antichrist systematically proves from that the long awaited system of the Antichrist is even now before us and knocking at our door.

Through a highly scholarly, theologically grounded, yet simple presentation, Richardson thoroughly corrects the objections of critics, establishing beyond a doubt, the Biblical case for an Islamic Antichrist. With large segments of the Christian missionary movement embracing a heretical method of outreach to Muslims known as "Chrislam" or "The Insider Movement", Mideast Beast cuts to the core of the matter, revealing the true nature and origins of Islam.

After finishing Richardson's work, you too will be convinced concerning the challenge of Islam to the Church. Some topics covered and questions answered:

What listeners say about Mideast Beast

Balanced treatment of the prophetic texts.

This book would be good for anyone wanting to get their teeth into the Old Testament prophets and the book of Revelation. It makes sense of many texts which baffle proponents of the popular European based Antichrist theory. If you think you can never make sense of the end times and the Scriptures that deal with the end, Joel supplies a very helpful framework to begin to deal with them.

A BOOK EVERYONE SHOULD LISTEN TO

The narrator is excellent, and the book is one you will want to listen to again and again. As well as the sources referred to in the book. It is a masterful work taking time to give the full opposing view. Every Christian should hear it.

I so enjoy Joel's teachings and really enjoyed Mideast Beast. I'm glad though that he has, since completing this book, changed his teaching on Daniel 8 and that is why I gave 4*'s instead if 5. Although I would love an addendum- I wouldn't want to change the end of this book for it is wonderfully done! It shows the heart of the writer and it's a great testimony to our Loving Heavenly Father!!! Thank you Joel! Praying for a great harvest!

This is a book for those wanting to know more about the modern debate over Biblical end-times prophecy. Before this book I had already read Richardson’s earlier book GOD’S WAR ON TERROR, so I knew full well what the title implied. This book is a more focused treatment on the idea that the Antichrist of Orthodox Premillennial Christian Eschatology will be of Middle-East origin. I think he makes a good case. Richardson here explains cogently how the conventional idea of an Antichrist of Roman-European origin does not hold up to close scrutiny. The idea that Ezekiel’s Gog and Magog are not Russia—as many Premillennial divines have traditionally taught—but are demonstrably proven to be the Antichrist and Asia-Minor (modern-day Turkey) is well developed by Richardson. He cites the many related scripture references that make it clear that Russia is not a satisfactory match for Gog and Magog. His explanation of how the Islamic Caliphate, headed by the Turks, neatly fulfills all the scriptural requirements for the fourth kingdom of Daniel chapter 2 and the fourth beast of Daniel chapter 7—and that Rome patently does not.


The book is narrated by Joe Geoffery who reads the book in an inflectionless monotone that is sleep-inducing. This is a non-fiction book, so there are frequent lengthy quotations of sections excerpted from related books. When shifting from Richardson’s text to the quotation Geoffery offers no audible cue to help the listener mark the transition. He does not even grant the listener an extra pause, but maintains the same pace that he gives for breaks from one paragraph to another. In the main, Joe Geoffery is more of an obstacle to understanding the text than he is an enhancement. To his credit, he does have precise diction so it is easy to understand the words he is saying.

Though we love our fellow human beings, and that love includes bringing about a caution when observing errant ways, too often we are too lazy to do proper research. Joel does the heavy lifting here, rightly dividing the Word of Truth and providing a completely unbiased tour of Islamic literature. From this exhaustive work, one can make an "informed" choice. And, that is what God wants us all to do: choose ("... ye this day whom ye will serve.") Every research of this nature must begin with honest prayer - prayer to God for discernment. With that premise, one can immerse oneself in the details, testimonies, and published literature from credible source, archeology and science. I pray that all who read this will find God's purpose and that the incredible, perfectly crafted integrated messaging system (of over 66 books by over 40 authors encompassing over 4,000 years) becomes real for each reader!

More evidence for an Islamic Antichrist

What did you love best about Mideast Beast?

OUTSIDE OF THE BOX

A most thought provoking work, well documented. Demands a months worth of Berean type research.

Enjoyed the narrative, compelling. A lot of research, but leads to confusion. So many different interpretations, hard to trust anything.

The author is right!

This book made me a believer of the Islamic AC. I think we Christians are in for a rood awakening soon. Please take Jesus up on His offer if you haven't and pray about our future . God bless you all, Kevin

All confusion Swept Away!

I'm a baby boomer who grew up with all the associated 'popular' interpretations of last day events. Imagine my surprise to read your book and find out that the source for all my attempts to finaly grasp and understand the major participants, as well as the chronological order of events, has always been frustrated by my myopic western mindset! Your book has truly given me a peek behind the wizard's curtain and simplified a very complex subject that really shouldn't be that complicated. You can thank your lucky stars you don't live next door to me because I have so many questions you wouldn't be able to get out of your house, lol. Thank you for all your splendid research, documentation, and straightforward presentation, it makes my research and re-education so much easier!

Have you listened to any of Joe Geoffrey’s other performances? How does this one compare?

No, found his pronunciation of some words difficult to hear clearly - in particular the hebrew words

Authors position gave me impression of being a little pretentious & patronizing. He would often say the revised Roman empire position was "impossible" & only his view was as a result of a "careful study of relevant passages" & history "perfectly" fit his view. Apart from that was interesting.

This book set me on my path to showing Christ’s love to others in working with refugees from the Middle East. Thank you so much