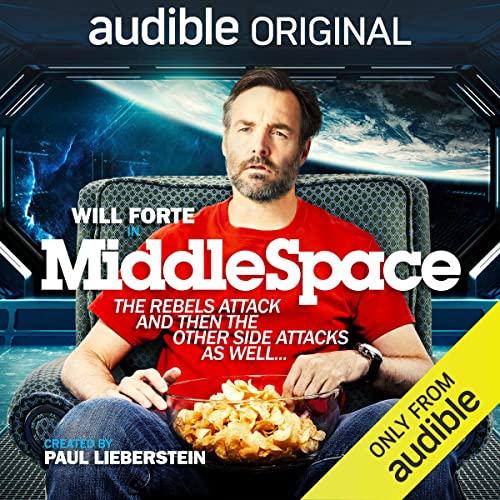 Middlespace: The Rebels Attack, And Then The Other Side Attacks As Well

By: Paul Lieberstein
Narrated by: Will Forte,John Malkovich,full cast
Free with 30-day trial

What listeners say about Middlespace: The Rebels Attack, And Then The Other Side Attacks As Well

Was genuinely funny, it’s a bit like the old Airplane and Naked Gun movies, really silly and a lot of fun. Big fan of Will Forte and the dry John Malkovich narrating just makes it.

So few comedy podcasts are this genuinely funny

Grinned at chortled throughout the whole podcast. Will Forte is one of the funniest comedic actors out there and the narration by John Malcovich was just perfection.

Will Forte as the Captain and then, (spolier) Admiral Captain, which is a title sort of like, Lieutenant General, but as you can see the higher of the rankings is listed first may confuse the average listener. If you enjoy listening to this, you are anything but average and the rank of the character mentioned will all make sense. If you start listening to this, be prepared for the long haul, as you won't be able to stop. There is never a dull moment. Well, it may have gotten dull for six seconds one time and for three seconds another time, but other than that, endless enjoyable listening. Except at the end. ...When it is over. ...Then the endless listening, ends. Thanks to Paul for writing this, and a fantastic cast. My one and only review on Audible after years of listening because I definitely would like to hear more from this author.

Love this show, great writing, great performances, amazing cast! Definitely worth a listen and will keep you laughing.

Refreshingly novel and very enjoyable. I binged it in a day and would highly recommend. It's not stupid...it's existential, which is smart.

Hilarious and voice actors were perfect

What an amazing find! This was so funny that I laughed out loud many times, the voice actors were amazing, I didn’t realize that it would be full of famous actors. These actors to do a great job you could tell they were having fun with it, this was very well written I’m going to see if this author has written other things because I loved this book and probably listened to it over and over again for three days straight.

I enjoyed every second!

The production and vocal performances were top-notch. The story was fresh and fast-paced and hilarious. I was entertained and distracted-completely absorbed when listening. Great job!

I must say I have never laughed so hard in all my life. What an awesome talented group of people. Love the narration by John malkovich. He just has that way of being John malkovich. I thoroughly enjoyed every minute and couldn’t stop listening. I hope more stories like this are coming soon!

Similarities to Mission to Zyxx, though this is scripted it feels there is much improv. great performances by a highly acclaimed cast. definitely worth your time.

It is a very clunky story and the acting likewise is very clunky. I think they must have recorded the actors separately and then combined the audio, it just doesn't feel like real dialogue.

As for the story it is kind of boring. The "Captain" is just a doofus who makes the inappropriate, selfish, idiotic, uncaring decision at every circumstance for comical effect. The story is set in a universe without any deeper meaning or scruple.

I expect more from Paul Liberstein since he wrote "The Office" America tv series. If you contrast "The Captain" to Michael Scott both are inept leaders. However Michael Scott is a highly competent salesman who performs well despite his intricacies but cares deeply for his employees even though he sometimes is caught up in pettiness, The captain on the other hand is Michael Scott except with all redeeming qualities removed.

The Office in the space.

Captain feels like more nihilistic Michel Scott from Office. Another sociopathic-themed humor Audible original (Hit Job + Hit and Run was my previous). This style does not really click with me if there is too much taking of human life without much regard - is it the Pandemic (or modern nihilism overall) toll on our minds or what? For some reason, this human life trigger occurs much more in audio form than in film for example. I perceive Middlespace as a bit simple, but there are worse pieces, I definitely have got fun in this piece.

very funny, if you like will forte you'll probably like this. listened to them all in one day, fully recommend.

Flawed but listenable, acting is good.

Nothing happens fast, when it does it's kinda flat. The humour is slow but wry. Good for bedtime listening. The acting is good.