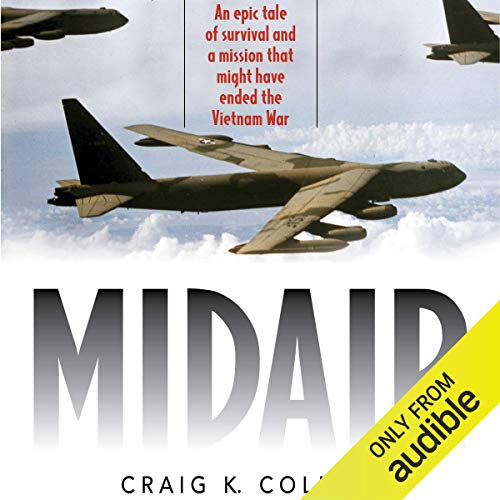 Midair is a true account of one of the most remarkable tales of survival in the history of aviation - a midair collision at 30,000 feet by two bomb-laden B-52s over a category 5 super typhoon above the South China Sea during the outset of the Vietnam War.

Authored by Craig K. Collins, the nephew of B-52 pilot Maj. Don Harten, Midair is an historically important work that is about more than survival. Interwoven through Harten's dramatic story of his million-to-one struggle against near-certain death is a previously unexamined look at how America had developed an aerial battle plan that would likely have ended the Vietnam conflict in under a month during the late winter of 1965. Instead the country's war planners and politicians veered off course and into a bloody eight-year quagmire. Harten was on the February 1965 top secret mission - a massive B-52 bombing raid of railways, supply depots, and airfields in and around Hanoi - that was called off in midflight. That mission and battle plan were mothballed until December 18, 1972, when it was dusted off and dubbed Linebacker II, effectively ending the war within a week. Over 120 B-52s bombed Hanoi-area military installations for eight consecutive days. As a result of the heavy bombing, the North Vietnamese declared a truce, attended peace talks in Paris in early January, and signed the Paris Peace Accords, ending hostilities in Vietnam on January 27, 1973.

It is the gripping tale of a young air force officer's first combat mission that instantly pulls the listener in and never lets up.

This book is non-fiction. Collins is a journalist who is telling the story of his uncle Don Harter an Air Force pilot. Harten flew more than 300 combat missions in three different aircraft, the B-52, F-105 and the F-111 over North and South Vietnam from 1965 to 1972.

In June 1965 over the South China Sea, during typhoon Dinah a category 5 storm, Harten’s B-52 bomber collided head on with another B52 bomber at 30,000 feet. Harten managed to eject from his co-pilot seat just as the plane blew up. The story is how he survived that ejection at 30,000 fee in a category 5 typhoon. The suspense increases as we read about the problems of rescue and his ordeal in the sea.

There is an underlying theme to the book that the military primarily the Air Force could have won the war if the politicians stayed out of it running the war.

This is an exciting tale of survival at sea in spite of all the odds against survival.
The author narrated the book.

Yes, to anyone interested in history of the Vietnam War and also deeper world history following the family of Mr. Harten.

Don Harten. Such a story.

Left me remembering my anger towards our political leaders of the time (1965 to 1969).

I loved this story, this recounting of this pilots experience s during the war. It took me back to all the times my grandpa shared with me his stories of WWII. I would definitely suggest this to anyone interested in history.

A bureaucrat that cost peoples lives In Vietnam. The war should have ended in 63.

This sounds like it was written by a child. It’s so bland, almost lacking feeling. Couldn’t get through more than an hour or so. Would’ve been better as a 10/15min short story or something

The picture on the cover is what sold me... well that and the recommendation of a friend.
As a former munitions (bomb) loader of B-52s stationed in Thailand in the late 1960s, I felt I had to read this. I didn't know what to expect and while I really can't relate to what Don Harden experienced, I still found this book incredibly interesting and a fascinating tale of one man's career flying B-52s and numerous other war machines.

I wanted to give this full 5 star ratings, but there were short sections that seemed to spend too much time on family history, and seemed to drag. That being said, they were useful to the story, so they were worth listening to.

I really liked the reader's voice.

this was a wonderfully told story from a true combat pilot. his story is gripping

Not much of the story centered on the midair event. The author took long and redundant side stories, more like filler to make a book. The reader was flat and dull. It did provide some insight into a pilot's life for that era.