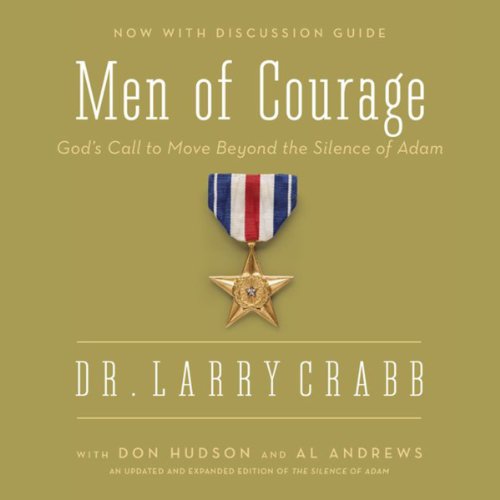 In this updated and expanded edition of The Silence of Adam, Crabb and his colleagues, biblical scholar Don Hudson and counselor Al Andrews, offer a fresh look at how God designed men. The book deals thoughtfully and honestly with men's ongoing struggles and exposes the difficulties they have in relationships. It presents the rich calling men have to reveal God in ways uniquely masculine. And it summons them beyond their paralyzing fear of failure to bold risk-taking, courageous action, deep spirituality, and full-hearted living.

What listeners say about Men of Courage

Poor theology, unrelatable examples, the renewing work of the Holy Spirit under valued. I completely relate to the problem and personally struggle daily to bear God's image and fulfil God's call. This includes being the husband and Father God tells me to be. Through grace Christ has not abandoned me, instead via His Spirit within me a grow each day in His strength. He holds me tight in His love.

Such a powerful book.

Praise God for these men and the wonderful truth they have helped me see. I realized so many things about myself that I had never considered, and I feel so much more encouraged and equipped to trust God stepping out into darkness and the unknown,which is where so much of life is lived.

I saw myself so many times in this book, the struggle to be avkan of courage is real. The responsibility is heavy. God givee grace to finish strong

Selfless and Sacrificial – the ultimate vocation

To have any hope of comprehending the beauty of 'Men of Courage' by Dr Larry Crabb, one requires faith in the spiritual divinity of God’s design; namely, the notion that “He created them male and female.” Gen 1:27

If one walks into this reading experience with a secular, intellectual human understanding, the reigning, contemporary perspective that expresses there are more than two genders, could potentially result in great offence or most likely, ignoring this book altogether.

Of course, Crabb doesn’t intend to cause offence or be ignored. He is speaking out of his Christian principles and relationship with a supreme spiritual God.

The idea of this book—that men have a predesigned role—may appear to a worldly audience as archaic. Factually, if we review the world’s current trajectory, the perspective presented by Men of Courage is reviled, ridiculed, and in some capacities, becoming increasingly outlawed.

Nevertheless, to Christ-centred believers, there’s a recognition how sacred masculinity and femininity are as designed and defined by God. If studied in depth, one will discover a beautiful, holistic plan for humanity’s salvation now and forevermore, through the unity of men and women.

Co-labouring with both genders, God reflects His incredible love through healthy relationships that exhibit kindness, peace, joy, fidelity, and honesty, glorifying a faithful Creator who never leaves us.

Despite the massive range of worldviews, it would be difficult to miss the clarity of Crabb’s words, which focus on gently and assertively showing us what a Christ-centred man looks like.

According to Crabb, God has established a high standard for men in relation to “moving beyond the silence of Adam,” – a clever tagline, referencing the moment when the snake entered the Garden of Eden, deceived Eve, and Adam did nothing to speak against the manipulation of the serpent.

Some may rightly argue that God has created an impossible benchmark for men, but anyone who knows their Bible Scripture will be aware that God can do the impossible when we surrender to His will over following our own…

The Godly man—as reflected by Crabb—is one who has continually confessed his brokenness, choosing to live through a constant leading and empowerment from God. He’s a flawed man who’s transparently admitted his weaknesses and intentionally seeks to be healthier in mind, body, and spirit – an active pursuit of holiness. He is unable to boast because he humbly knows his sin and receives his support from a loving, graceful God to move forward as a selfless, sacrificial being to all, whether friend or enemy.

When comparing 'Men of Courage’s' image of masculinity to that of the concept produced by the world, illumination over the immense misunderstanding by worldly perpetrators, becomes starkly evident.

The worldly depiction of a man—the individual who lords his authority over all—is that which has aroused activists with outcries of injustice and inequality from a variety of movements. These activists rightly proclaim men as “male, chauvinist pigs!” and “sexist, misogynist dinosaurs!” and we males deserve this. There is a wretched male ego within us that has committed terrible atrocity the world over and only God can heal this brokenness.

In a world that continually erodes Holy foundations, replacing them with human good intentions, society is afflicted with confusion and an over-abundance of choice on how to live.

It is no surprise that there’s a visible descendance into narcissism, hedonism, sociopathy, and megalomania; a view that could only be denied by an individual who’s discarded the notion of objective morality.

The very notion of the ‘selfie’—a supposedly harmless bit of self-adulation—speaks volumes of western society’s permissible decadence and growing destruction.

One of the greatest active deceptions to date, is the human free-will choice to reject a ‘sovereign designer’ and therefore rebuke all notions that there is a purpose for what we see around us.

One arena that’s gained global traction, is the supposedly ‘progressive movement’ to cancel the gender differences of male and female, hindering any concept of the loving, Kingdom-culture community that God wants us to experience.

Instead, what’s been birthed is a counterfeit ‘community’ where everything is relative, riddled with vengeance, incensed by injustice, and enflamed by entitlement, leaving little—if anything—to grasp for stability.

Essentially, anything goes and no one really knows what they’re purpose is other than to make money and be happy, which would be fine if the damage wrought by such selfish ambition didn’t harm so many others in the process.

'Men of Courage' explores what it means to be a surrendered man of God.

The Godly man described by Crabb’s reflections on the Bible is very different to this worldly male who has caused unaccountable pain and provoked unquantifiable division.

Personally, the first thing I noted about 'Men of Courage' was how impossible the vocation of Godly masculinity is.

In practical, applicable terms, the author unveiled that Christ-centred men are to walk in utter selflessness and sacrificial love the way Jesus did and continues to do for humanity. From experience and reading of much literature, I see that this is only possible with divine leadership abiding with us daily.

The book follows a comparison drawn by what Crabb calls the authentic and inauthentic man.

Dealing with the ‘passivity of Adam’ spiritual disposition, the inauthentic male is revealed as the pride-driven, fear-inspired person with confused ideas of masculinity, exhibited in unruly acting out; an individual unable to handle life’s problems effectively, choosing passivity or quick-escapism in the face of fear, and selecting self-exaltation when challenges of pride emerge.

The very common phrase “men are pigs” came to mind as I continued to read.

The fact for any discerning Christian, is that men are either predators or protectors. There is no middle ground and sadly, the predator category has greater numbers today.

The book reveals the brokenness of such a man and that his optimum exit strategy is the one given by God, to surrender to the Lord, relinquishing pride and fear, and enduring the crushing of male-ego in order to become the courageous, humble Christ-centred man, who will love all without discrimination, offer protection, and be cheerfully self-sacrificing. I also noticed the significance of memory for men relating to priorities and responsibility.

Readers are compelled to question whether they choose the silence of Adam, incorporating passivity or absenteeism; silence in the face of chaos or escapism into fantasy. Powerful questions throughout the book convicted and inspired me like: Do we have a passion for holiness, toughness, or neediness?

Light is also shone in the direction of that dark place within us all - the enemy-voice inside who feigns friendship, offering rational self-preservation and quick relief for fixing fears.

Overall, we are given an image of a man that I’d be baffled to see rejected or refuted. A true man of Christ, living through the Holy Spirit doesn’t boast and isn’t misogynistic—he isn’t prejudice in any way. He is utterly, self-sacrificingly, gracefully selfless.

Personally, I think that Crabb’s reflections unveil a stunning standard for men, but with the world being so contentious—even about seemingly positive things—I’m sure there would be readers out there who would reject this God-inspired masculinity.

In relation to the calling, the interesting thing is that in life, we’re never short of tests of our selflessness. From small, seemingly unnecessary requests to bigger, time-consuming issues, the forks in the road between selfishness and selflessness are constant until our end.

A must read for all men

This is a must read for all men. To step forward into the darkness and speak the word of God. It’s our design, and instead of leaning to our sinful nature for comfort and safety in the dark, let us lean on our creator.

I was challenged by this book. I also learned much about being a man. Most importantly, the author points to Christ. He seeks to make much of Christ.

Larry has a unique way of writing. He has blessed my life and through this book the Holy Spirit humbled me. Thank you Larry.

A perfect book for the time we are living. The words of encouragement have given me hope that I can make it. And is helping slowly heal a dying marriage.

Crabb does a great job in telling us how all men are failing in so many ways. Too bad he doesn't hold out much hope or point to specific ways to succeed in overcoming these failures..