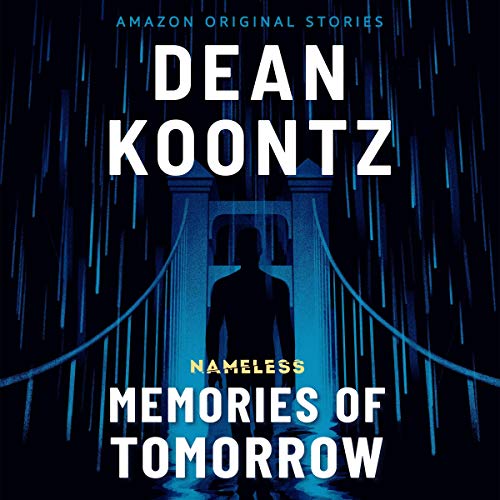 What strange science made Nameless who he is? What catastrophes have been erased from his memories? And what foreboding visions plaguing him are about to be realized?

In Indiana, a murderous psycho has kidnapped his own six-year-old stepson, Jamie, and secreted him away in a subterranean cave. It’s become their bunker. For Nameless, the case is breaking down his defenses, and it may force him to face his memories. As his dark past comes flooding back, how much does he really want to know?

From #1 New York Times bestselling author Dean Koontz comes Memories of Tomorrow, part of Nameless, a riveting collection of short stories about a vigilante nomad, stripped of his memories and commissioned to kill. Follow him in each story, which can be read or listened to in a single sitting.

Memories of Tomorrow is the sixth in a series of short stories all released in one day. My favorites are the first and the last. These do not need to be listened to in order however I would save the sixth book for last. There are revelations made at the end of the final story that make an impact in the character‘s perception of his directives.
Free to borrow with the kindle unlimited edition.
Edoardo Ballerini narrates these short stories perfectly.
HIGHLY RECOMMENDED.
If you found this review helpful please indicate so.
Thank You.

11 of 11 people found this review helpful

YES we finally get some insight and know who the Nameless man is!

This book was about a psycho guy who kidnapped a little boy and other things.

But we finally get a glimpse of who the Nameless man is! Loved it.

The narration was great. I really like Edoardo Ballerini.

I totally recommend this series. And I really hope it is not over.

Koontz at his best

A great series well worth the time. It definitely is what has made me a long-time Dean Koontz fan!

Nice series of short stories. Koontz is one of my all time favorite authors. My first was Whispers which scared me to death and my all time best is Watchers. I love the Jane Hawk series.
I guess he didn’t want a whole novel from these stories which means each one has a level of repetition but overall, enjoyable. Now if he would just finish the Fear Nothing series.....
PS. If you liked this, you would love the orphan x series by Gregg Hurwitz

Very interesting story, even more interesting characters. The whole series was built in a great premise. I'll be looking forward to more books related to this series!

Wonderful collection of books. So enjoyable and easy to read. Renewed my love of Dean Koontz.

Dean is a master of taking you through tragedies and triumphs.
Painting the beautiful tapestry of winning against the odds.

There are 6 of these very short stories, that are all free read and free listen. Having been such really short stories I’m going to review them as one. I've waited until I listened to them all to leave one review.

IN THE HEART OF THE FIRE
For such a short one this was really good. We meet Nameless. And he takes care of the revolting sheriff and the deputy. No one was more deserving.

THE PRAYING MANTIS BRIDE
Lucia was one crazy, superstitious woman. Another one that just loved to kill.

RED RAIN
Regina Belmont was badly burned, and her 2 children were killed. Nameless took care of the men involved.

THE MERCY OF SNAKES
A doctor and nurse killing the elderly in an assisted living don’t last very long when Nameless showed up.

MEMORIES OF TOMORROW
I gotta tell ya’, I really enjoyed all 6 of these short stories. And I really liked why he had amnesia and who the boss was.

There was some swearing but not much, including the F-bomb that was used a few times.

I’d like these shorts to become full length novels and they were read by this same narrator.

As to the narration: Awesome! Edoardo Ballerini did a fantastic job.

I loved this series!

Probably best one of the series, more Info revealed for nameless. I didnt like the whole series in general as most was confusing amd chaotic. Not his best work but for being free I guess I csnt complain

These books were great as short stories and the finale didn't disappoint. Maybe there will be follow ups.