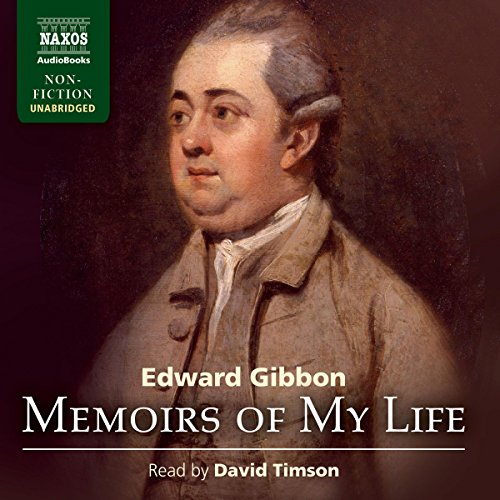 Memoirs of My Life and Writings

Edward Gibbon (1737-1794) was an English historian and Member of Parliament known for his monumental series The Decline and Fall of The Roman Empire, which chronicled the dissipation of the Roman dynasties in a lofty, majestic style unique to its author. Memoirs of My Life, published posthumously in 1796, wholly unveils the character of the world’s greatest historian in full candor and openness. We follow him from birth, through to his education at Oxford, to his time in Switzerland where he met Voltaire and fell in love with a Swiss girl. We accompany him on his travels through France and Lausanne, leading on to his eventual arrival in Rome, where he conceived of his epic Decline and Fall. Gibbon’s Memoirs is a portrait of a rich and productive life and offers a compelling insight into a towering figure; it is essential listening for anyone interested in great literature.

What listeners say about Memoirs of My Life and Writings

Gets Good after Chapter Five

I was despairing at having chosen this audio book as I slogged through the first four chapters, which cover his family history, but once he started in on his own life, in chapter five, things started looking up, and in the end, it was a rewarding listen. (There are thirty-nine chapters in total).

The Present is a Fleeting Moment...

The present is a fleeting moment, the past is no more; and our prospect of futurity is dark and doubtful."
-- Edward Gibbon, Memoirs of My Life

After Brexit and my country's own recent crazy election, I was tempted to once again read Gibbon's The Decline and Fall of the Roman Empire. I first read all 3,589 pages of Gibbon's fantastic history over five years ago in 2011.

I decided to put off my re-read of Gibbon's masterpiece and instead read his 'Memoirs'. I am glad I did. This is one of those underrated, under-read masterpieces. It reminded me in many ways of Education of Henry Adams and other artistic memoirs. The first half could almost be considered a Künstlerroman, but Gibbon spends enough time in his maturity and decline to probably grow beyond that adolescent genre.

Anyway, the prose is beautiful, with many, many quotable passages and observations about such figures as Voltaire, Hume, etc.. Edward Gibbon, besides being an historian was also a member of parliament during the American Revolution, so those aspects of the memoir are also very interesting. Finally, his discussions about his great work is worth alone the price of admission. Anyone interested in 18th century history would love his candor, his wisdom, and his humor. In some ways his openness reminded me a bit of Montaigne and Pepys. If anything, now, this voyage into minor Gibbon has made me more likely to re-read Decline and Fall.

He lived an eventful life of the mind...

... but, well, lived an otherwise uneventful life. The writing is beautiful. I reversed several times just so I could listen to the words again. That said, he had no paramours and no real enemies. Not much happens outside his expansive mind. His opinions of writers and philosophers are great to hear, but, well, sometimes you want some juicy stuff. And it's just not here.

I'm glad I listened to it, but I can't say it captivated me.

What would I really have wanted to be? An C18th English gentleman of culture, perhaps with a small country parish and a good stipend. Timson lacks faith in his listener, and is always putting far too much emphasis into his reading, as though we are too stupid to get the point. For all that, it is a charming book from a vanished age.