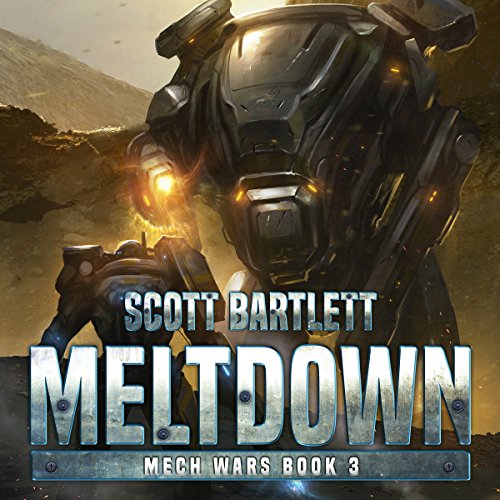 Chief Roach has merged with an alien mech - but can he control its power?

Harnessing alien tech was the only way to counter the power of the quadruped mechs piloted by the Quatro. Except Roach's awesome new weapon is like a sword with no hilt, and it seems to be doing everything it can to fragment his psyche.

Roach must lead Oneiri Team across an Eresos engulfed by the fires of war. Their mission is to stop the legions of Quatro from laying waste to what remains of humanity's colonies.

If Roach can't resist the alien mech's promises of glory and chaos, there will be a meltdown - not just for Oneiri Team, but for everyone on the planet.

Scott Bartlett have accomplished the impossible!
No matter how long you’ll wait for the next audiobook to come out, no matter how many books you have listened to in between, once you start listening to another one of the Mech Wars books you’ll know exactly where you are from page one.
He managed to create such an awesome universe that is so unlike any other which brings you right back to when you left it.
Thank you Scott, excellent writing no question about it.
Plus a perfect performance a perfect combination.
Absolutely recommended with all my heart!

Scott never lets up in this third book without a dull moment to be had and Mark drives it home with his narration and character acting. If you haven't read or listened yet then I highly recommend this series!

Can’t wait for the next audiobook!! This was an amazing tale of adventure, betrayal and unwavering loyalty. Lines were drawn, choices were made, and now we anxiously wait for conclusion

Two words some up this novel. Friendship and Betrayal. This novel out of all of Scott’s work so far have made me tear up. There are so many scenes where my heart sank “in a good way.” Definitely worth the read. Lots of mech fight scenes.

Action is Ramping Up

This is the third book in the Mech Wars series. The full cast is back and events are ramping up to a full showdown with Darkstream. New enemies are also coming out of the woodwork as it looks like the shadowy meddlers may be back a year early. This was an enjoyable read, and I will finish the series.

Disclaimer: I was given this free review copy audiobook at my request and have voluntarily left this review.

Give me more!!!! This is an Amazing Mech story and Narration. Scott and Mark have created a wonder teaming of writing and narration, that truly brings you into the battle. I am excited and sad, to start book 4, the final book.

Note at the time of this review Audible did not have chapter titles for this title.

This book was provided free for review, however, these are my honest opinions and review.

Great performance by Mark, and the story line is finally coming together In book 3, might be hope for Scott Bartlett after all.

One book for the price of three

Good performance from Mark Boyett but otherwise disappointingly lean on noteworthy characters, 3, stories, 2, closure, 0, and overall content. Worth one credit for all three books but I paid three with two credit's buyers remorse.

a fan from supercarrier, and this is a great continuation following those dark streamers. can't wait to see how this trilogy ends.

Mech wars 3 and the high quality Sci Fi continues.
If you liked the first 2 books then you'll love this one. If you haven't read the previous books go on buy book 1 and give yourself a treat.
There are many twists in the plot, some answers and lots of surprises.
The narration is first rate,
I received a free copy of this book in exchange for an honest review.

As the team continue their struggles they run into issues where some members can't be relied upon and even become the enemy and succumb to the call of the alien technology.

The narration was great.

This book was provided free of charge with the understanding that an honest review would be submitted.

Like fast paced action novels?! I do! It has an Engaging story and some really cool sci-fi tech. This series is so easy to listen to that you’ll loose track of time.

The third in the Mechwars series by Scott Bartlett and continues where Dynamo left off with the various groups fighting for their own causes.

This book carries on with those journeys and we start to see some of the group's getting closer to each other and finding out a little more about some of them.

I thought Jake would be the main character bit he isn't featured as much as I thought he would be here.

There's plenty of action, in fact it seems like the whole book is action and it must have been exhausting to write. I did get a little bit confused in this book, "Amblers" are mentioned and during this book what I thought they were became clear that's not what they were at all and if there was a recap about what their function was I must have missed it.

If you're reading a previous book and they are described, remember what they are!

It ends on a frustrating note, I won't spoil how but if I didn't have the next book downloaded and ready to play straight away I would have been very annoyed at how Scott left things. Cliffhangers guarantee people will get the next books though I suppose.

Mark Boyett is again the narrator and I think of him as an old friend now, I've listened to his voice more than anyone else over the last few weeks of catching up with Scott's books and Boyett narrates them all very well.

I recommend this book if you're up to date with the series and you'll definitely want to see how everything pans out.