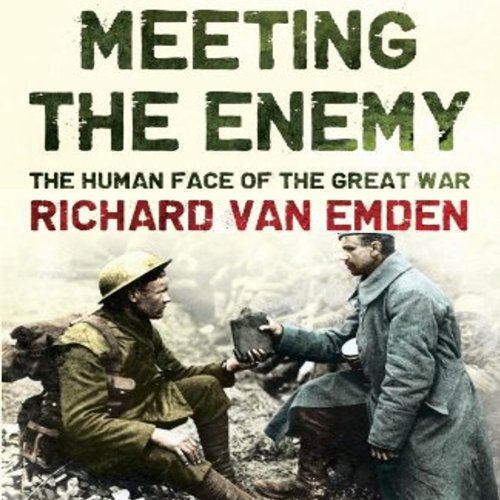 A British soldier walked over to the German front line to deliver newspapers; British women married to Germans became ‘enemy aliens’ in their own country; a high-ranking British POW discussed his own troops’ heroism with the Kaiser on the battlefield.

Just three amazing stories of contact between the opposing sides in the Great War that eminent historian Richard van Emden has unearthed - incidents that show brutality, great humanity, and above all the bizarre nature of a conflict between two nations with long-standing ties of kinship and friendship.

Meeting the Enemy reveals for the first time how contact was maintained on many levels throughout the War, and its stories, sometimes funny, often moving, give us a new perspective on the lives of ordinary men and women caught up in extraordinary events.

What listeners say about Meeting the Enemy

This book has some great chapters about interactions on the front, however a few things must pointed out.
1. A large chunk of this book is about the plight of "enemy aliens" in British. 2. This is a book about the human face of the BRITISH in the First World War with a smattering of German accounts.
All and all a interesting book. I did learn much, but it's content is a bit lopsided and the title is a bit misleading.