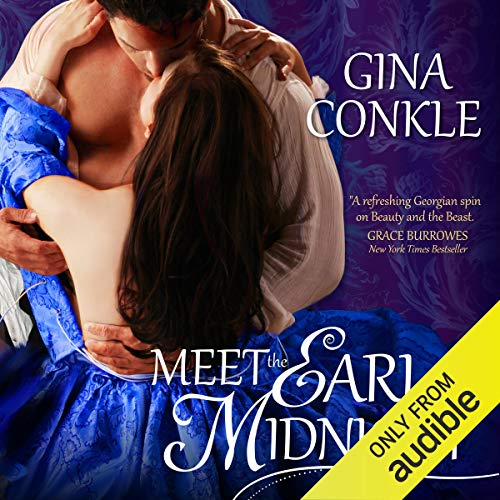 Meet the Earl at Midnight

It's going to take a Beast to tame this Beauty

The Enigma Earl. The Lord Phantom. That's what the gossip pages call Lord Greenwich, a mysterious nobleman who doesn't show his face in London Society. With a reputation like that, it's no wonder that Lydia Montgomery is horrified to be dragged from bed and packed off to live with him to save her mother from penury.

While Lydia has received all of the training a lady should endure, she's decidedly un-ladylike. She despises her corset and isn't interested in marriage; in fact, she would prefer to remain unmarried so that she can spend her time improving her art. But if she wants a chance at happiness, she'll have to set aside her fear of Lord Greenwich and discover the man hiding behind the beast.

What listeners say about Meet the Earl at Midnight

absolutely adored this book, if i could one thing id have had him kiss her earlier! 😙

This was a really good read! I loved all of the characters and especially the quick witt of Lydia and Edward... This book had me laughing out loud on several occasions. But it was kind of drawn out and there was only one sex scene... I have to admit I am a little jaded and wanted some more fiery sex scenes and interaction between the main characters... But still this was very entertaining.

Wonderful Performance of an Okay Story

What made the experience of listening to Meet the Earl at Midnight the most enjoyable?

Marian Hussey. Her performance was terrific. She captured each of the characters nicely and added an extra layer of realism to the book.

The ending was okay but I felt as if there were several issues left unresolved. It was vaguely unsatisfying.

Which character – as performed by Marian Hussey – was your favorite?

Edward's mother. It was like listening to Angela Lansbury in Beauty and the Beast. I think she captured her age and personality very well.

She jumped in his carriage and stole his heart.

Marian Hussey has been added to my auto-buy list! She reminded me a lot of Ashford McNab.

Fractured Re-Telling Of One Of My Fav Fairy Tales!

Would you consider the audio edition of Meet the Earl at Midnight to be better than the print version?

I really enjoyed the narrator's performance and would have missed that if I'd read the story instead of listening to it. Marian Hussey, the narrator, did an excellent job at bringing the characters to life and capturing the essence of the characters.. Her accents and mannerisms enhanced this delightful tale. She differentiated well between the characters making it easy for the listener to know who was speaking from her voice. I had never listened to anything Marian had narrated previously, but I would not hesitate to pick up another book that she has narrated.

It's a wonderful Georgian romance reminiscent of one of my favorite fairy tales, Beauty and the Beast. I really liked both the hero and the heroine, Edward and Lydia. They were similar in many ways. They came from different social classes, but neither gave much credence to society's rigid definitions. They were each free spirits who enjoyed their independence. Each was driven by a purpose; Edward's was botany science and Lydia's was art. However, both were so intensely passionate about their separate interests that a compromising middle ground in which their interests could co-exist and they could each find happiness did not seem attainable, but I held out hope.

In addition, I have to credit this books with piquing my interest in botany and art. I find myself looking at art differently now, as it was explained in the story that there is a difference between looking and seeing just as there is between studying and learning. AND my curiosity demanded that I look up one of the plants that was featured in the tale.

One of my favorite scenes occurred near the beginning of the book. It occurred right after the clandestine meeting and had me laughing out loud. Lydia is tired and stressed after the late-night meeting and Edward has insisted that she accompany him to her new home directly. Lydia loses her footing as she exits their carriage which leaves her in a compromising position with her face in Edward's crotch.

I would have loved to do that as I kept thinking about it when I couldn't listen. I found myself planning extra time to listen as I was dying to find out what would happen next.

This was the first book I've ever read or listened to by Gina; I will certainly pick up others by her in the future as it was quite the entertaining read and her writing style was very engaging. I really enjoyed the way she seamlessly combined humor and their romance that alternated between sweet, hot and something in-between. With great atmosphere, clever, witty dialogue, well-defined, genuine characters with great chemistry and a rich plot, this tale will keep readers spellbound up to an exciting, heart-stopping, but very satisfying ending. I highly recommend MEET THE EARL AT MIDNIGHT to anyone who enjoys sensual historical romances.

I'm always skeptical trying out a new-to-me author but this book was a pleasant surprise!

First of all, the narrator was wonderful. That sets a good tone for the book.

The "beauty and the beast" theme always allows for some touching moments and this book had them. The two main characters are very likeable and their chemistry is fun.

It was a very entertaining and easy listen. Now I'm going to look for more of Gina Conkle's books.

Some stories are hard to read when the children are a pawn in their parents misdeeds...but with a strong mind, honest direction, and a sincerely good heart...a true path to your happiness could be the one before you right from the very start! Haha I rhymed!

I thoroughly enjoyed this one. The characters had their own back stories that were explained as the story unfolded so it didn't leave me frustrated or confused like other books have made me feel half way through. Some think it's a suspense move to wait until the very end to tell you why the character is acting a certain way, but this story doesn't need that particular type of angst. There's a little mystery to each of their pasts and as the relationships grow, a little of their history is explained. I find that it helped build the characters and structure the plot carrying us along the path that the author was wanting. I wasn't irritated for the lack of explanation, or the repetitive woe as me type frustrations that many romance stories have. Very happy, can't wait for another!

Excellent narrator. Strong characters. Beautifully written story where love truly does conquer all. Wonderful characters who will steal your heart.

The story was lovely,well written and plotted. It kept my interest until the very end, my only complaint is that the next book isn't available yet.

Would you listen to Meet the Earl at Midnight again? Why?

Yes, It was a great story and well written.

The Lydia. She was an underdog in the world of Earls and Countesses and she helped him to overcome a great scaring of his body. He hid from the world.

I think the way she could change her voice so that you would not get confused listening to the characters.

I liked it when she had thought the ship had left with him on it.

This was a wonderful clean story that anyone could listen to. It was a beautiful love story.

This was a good story. The characters were great, The hero was awesome. The heroine is funny, smart and very witty. Not a simpering whiny heroine. They had some great chemistry together, and a some nicely written sex scenes.

There is plenty of dialogue throughout the book, a good story line and plot.

As for the narrator, She did a great job. All the men sound like men and all the characters have their own distinct voice. She puts emotion in her reading as well which is always a plus.

It will keep you up till midnight