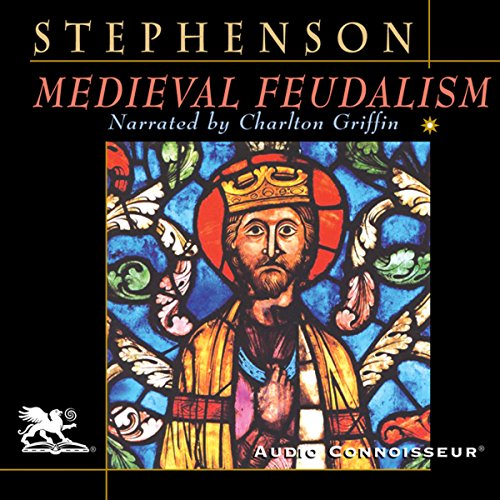 Medieval feudalism is one of those subjects that most of us are familiar with, and yet have difficulty describing. Was is a political, military, economic, or social system? And how did it develop? All these questions are answered in this superb book. Carl Stephenson has done a magnificent job of paring away all extraneous subjects and focusing on just the key elements. This short book, a masterpiece of brevity, succinctly sums up medieval feudalism better than anything ever written.

Medieval feudalism was essentially a means of paying retainers in land, rather than money. With the collapse of the Roman Empire and the disappearance of coinage, the only medium of exchange left was land and its produce. Thus, the barbarian German rulers of France sought some means of retaining able-bodied soldiery and companions at court.

What evolved was a process of infeudiation - essentially an exchange of land for military service. The entire concept of vassalage, liege lord, and knighthood came about in France in the early Middle Ages, though many of its more advanced forms did not evolve until much later.

This is an important book for any history buff who has the least interest in the Middle Ages.

What listeners say about Medieval Feudalism

Not an introduction to feudalism

What disappointed you about Medieval Feudalism?

the language was very academic and the narration was hard to pick up on words you didn't know. Vassal, Fife sounded like vessel and thief. The latter chapters were a little better once I went and did some research on feudalism and was able to follow along a little better.

Would you ever listen to anything by Carl Stephenson again?

the reading was dry

What character would you cut from Medieval Feudalism?

there were no characters

skip this one unless you really know what you are getting into, and if that's the case you should probably just read the book.

Very learned and authoritative, but unfortunately dry treatment of the subject... read in a harsh, monotonous voice. It was the only thing in my iPod on the 5 k. hike to the dentist's
and it came as a relief to be sitting in that chair...the sound of the drill almost soothing...

The medieval period and its social structure is explained in this excellent, if succinct book. It explains how the feudal system evolved from the customs of the warrior tribes from Roman Germania moved west and conquered what is now France. They brought their customs with them and these were perfectly suited to the war-like society of the Caroligian period of the early medieval period.

The 11th Century 'Song of Roland' is the acme of behaviour of a vassal to his lord, Roland, fighting a rearguard action for his lord Carlemagne, is killed in battle becauce he refused to blow his horn to summon help.

This books helps in the understanding of the original meaning of 'feudal' which today can mean many things, some pejorative.

One quibble is that narrator, Charlton Griffin, is not perfect. His pronunciation of 'Au' for 'O' is annoying and his misprounciation of certain French words and place names seems curious, but the book is short and these oddities endurable.

This essay was written before the whole controversy over the word feudalism. It explains the basics of feudalism argues that this system was not a degeneration of a more centralized state, but a reaction to differing needs and circumstances.