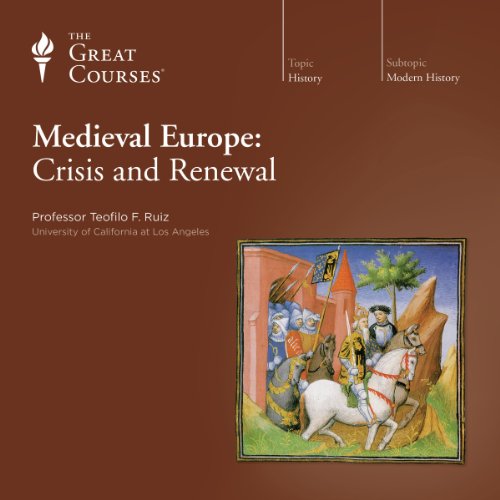 The Middle Ages harshly tested every aspect of human perseverance, imagination, and survival. Living conditions were squalid for almost everyone except the ruling elite, and most of the riches of Western culture were preserved in monasteries and on other continents. And into this setting came widespread famines, prolonged wars, and plagues that marked Europe's late medieval period as one of the most harrowing in recorded history. But Europe was not broken by these crises. Instead, it renewed itself and spawned fundamental artistic, religious, romantic, and political ideas that continue to shape our world to this day. This series of 16 engrossing lectures transports you to 14th-century Europe to experience a hero's tale of cultural trial, suffering, and triumph. It guides you through 200 years of stunning transformations in how people viewed themselves, how they worshiped, and their relationship to land and country, addressing key concepts that include national boundaries, church-state separation, individuality, and sovereignty - all of which find root in the medieval world.

The series is divided into three main sections that provide you a framework for understanding medieval society through detailed descriptions of what life was like for peasants, merchants, and monarchs; show you how this rigid but well-entrenched social structure was shaken to the core by crises like the Hundred Years War and the Black Death, and let you experience the glorious renewal that followed, including the spread of Renaissance ideas and styles; the creation of the modern nation in Castile, France, and England; the "rediscovery" of Plato, and the far-reaching voyages of discovery.

What listeners say about Medieval Europe: Crisis and Renewal

Thorough and interesting look at Medieval Europe not just from the big personalities but also the broader social, economic & political developments. Lecturer is passionate about subject and communicates beautifully with an expressive and engaging manner.

What did you love best about Medieval Europe: Crisis and Renewal?

What was one of the most memorable moments of Medieval Europe: Crisis and Renewal?

The story about the boy who wanted a girl (geese). The lectures on romantic love.

The blending of high and popular culture. The end of the conclusion. I did not want the lecture to end and wished for more.

This lecture changed my life by virtue of expanding my perspective and helping me "tie down" old and hazy ideas that I've had since college and law school. I wish I were younger and a history student at UCLA. I especially liked his lecturing style. I liked that he was not afraid to think out loud. By this not only did he provide the idea but also the road map to it. Because of this, I got way more out of the lecture. He lectures like a grown up. Trust me, I speak in public for a living and this is rare quality indeed. He is a wise man and great and engaging lecturer.

I re-discovered Prof. Ruiz through his lectures at Context, and followed back to Audible to listen to this series. He is an amazing thinker and lecturer and I loved all the connections that he made in these presentations. I listened to some of the segments more than once, and look forward to listening again in the future.

I'm surprised about the critical comments about his accent. I didn't have any troubles understanding and I thought he had a lovely speaking voice.

I will say that I'm not sure this is the first Great Courses I would listen to for the Middle Ages. I would start with Prof. Daileader's three part series to get a working knowledge of the events, people,, etc. if you (or a homeschooling student) is new to the topic. If you are already interested and somewhat familiar, then this is superb.

I loved this lecture. It did drag for me a bit only because of how in depth it was. Which is a good thing. I'd consider myself a middle ages efficenato and have been reading up on the time period for going on a decade. There were things I've never heard before, because they were things about the period I personally wasn't interested in the time period but if someone wants a nice all around picture looking more into how people lived then how they died I couldn't reccomend this enough. It is strongly focused on Italy in particular which is also not a normal location of study for me when I'm reading up on the medieval era.

But the narrator is fair never seeming too biased and revealing any he may have. I also love his accent and can't recommend this enough to anyone interested in the subject material. Great read for my lunch break and after class.

I believe several things prevented from enjoying this course. First, fairly thick accent. Second, inefficient use of time and often repetitive remarks. Third, socialistic / atheistic perspective on the history. Fourth, while Prof. Ruiz attempts to tell quite many illustrations they often appear to be less than scientific: stories are more a hearsay rather than facts based on cited historical documents. I decided to purchase another Medieval Europe course to give it another listen. Hope someone else enjoys this recording more than me.

While Prof. Ruiz may have good teaching skills for Spanish speaking students, the professor has a far too thick Spanish accent in English for Anglophones to understand without great effort, much repetition of lessons or parts of lessons, mental endurance, etc. to give this course much value. in giving 2 stars, I felt overly generous and grading based on pity rather than inherent value.
Besides "berry poor uhEnglish uhskeells," some of Prof. Ruiz' knowledge of the Middle Ages conflicts with established and confirmed (many times over) history, especially Church history.
Bottom line: Avoid this course.

This course is a great primer for the middle ages, but there is always more to read. Although I loved the professor, I had one criticism, and that was that he had a bit of a bias against men. Which may seem strange, but very common amongst the professor-types. Although I felt women were under-spoken of, as throughout every period women have a strong influence on society, they were sparingly mentioned, and the professor gave some very strange interpretations of works of poetry and writing from time periods as evidence of an ill-will against women, though I think this was mostly due to a lack of study in symbolism, and pretty easily amended through independent research. Although the welcoming to criticism made me give the course an extra star. The professor is a man, after all, and we're all free to our own opinions, I just find opinions to be a bit odious without first mentioning that something like that was just his personal interpretation, etc.

I loved listening to this course! The teacher is excellent, and it's a fascinating topic. It's not just the usual wars and conquerors, although this is included, but all spheres of society. Dr. Ruiz talks a lot about the philosophies and beliefs of the people living in this particular place and time. This is what makes the class so interesting!

This is a great course about the end of the middle ages and the beginnings of the renaissance. On the one hand it is a complicated and complex matter, there are many things to cover so it's kind a big summary on a very specific but rather big subject. This is no a story of names of kings and wars, but instead it is a very interesting approach on how society was changed, how the human mentality of middle ages was transformed in many aspects: social, cultural, economical, political, philosophical, etc. Prof. Ruiz is fantastic, very moving, emotional, telling many great stories and anecdotes. So you will not only learn about history, but also about many great writers, thinkers, philosophers and books that are to be read and known for personal development. This is more than a course of history, it is also a course of culture. The best is the personality and passion of the very great Prof. Ruiz. Thanks to him for all his devotion and clarity.

Good overview, with an emphasis on Spain which was nice. Worth a listen but I wouldn't get too excited.

Teo is superb at clarifying his position and his terms. Methodologically his arguments are easy to follow. Lecture 1 might bore some lessons as it very procedural, but it's a very important lecture for understanding history as a professional discipline and for understanding Teo's perspective in later lectures.

This is not a dry technical series, these preliminaries are essential to a proper critical understanding of the material you're presented with.

I really wish more historians were this well organized.

Teo says in lecture 1 he's happy to be contacted about material in this lecture series; indeed, he gave a very insightful response to a question I posed on some seminar reading for my master's degree in history.

I noted the below from lecture 1.

Purposes of this course

1) History from below i.e. the history of ordinary people.

Pt1 (E1-4) Stage: sets up the stage of how Europe looked in 1300. What were the basic economic and political structures? What were the boundaries of this world?

What we want to do is set up the geographic, demographic and linguistic boundaries of this Europe.

What you'll hear throughout these 16 lectures is a specific kind of interpretation. I speak from a very specific methodological point of view. Most of my work has appeared in French in the journal Annales. I'm an Annalist, I'm interested in change over the longue durée, I'm interested in structural change.