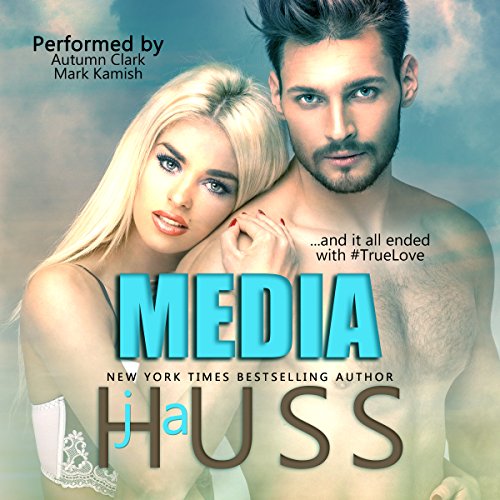 Vaughn finally realizes Grace is much more than a submissive he can control. He wants more. More of everything. More nights together, more mornings together, more years together. They connect in a way he never imagined. He wants the happily ever after and he wants it with Grace.

But everyone has a past, and Grace and Vaughn are about to come face to face with people they thought they left behind. Real life collides with fantasy, and only facing the truth will get them through. Is Vaughn really a hero? Or does he just play one on TV? And does Grace really need saving? Or is she stronger than she thought?

Media is a three-book bundle consisting of Status, Profile, and Home from the best-selling Social Media series.

What listeners say about Media

This Series only got better

Totally enjoyed this series, it only got better from books 1,2,3, The book grew as the tale was told. Narration was brilliantly done . I didn't think to much of the sound affects, they could have been left out. I had one hell of ride, raw pain mixed with love and understanding and lots of sex. You will not be disappointed.

Great story, not so much the male narrator

While I loved this series...especially this second set (4-6)...I was not a fan of the male narrator for the voice of Vaughn. It really did not seem to fit him and when he talked in his dominating voice, just seemed to weak...I wasn't buying it. I loved the female narrator for Grace...she was perfect for that character!

However...I still love all of JA Huss's books and this is another one that had great characters and a great story line.

@Mrs.Invisigirl LOVED IT!! the 3 part conclusion to the Social Media series was phenomenal. #VaughnAsherisMyMan

The author's second installment in this series takes a new turn. While the first set of books focuses on the relationship (and sex) between the two main characters, the second set of books brings in a new level of intrigue and mystery. Grace's past throws a wrench into her relationship with Vaughn, and puts her into serious danger. Readers will want to keep listening to see how Vaughn and Grace manage to cope with outside influences that threaten their safety and the existence of their relationship.

This was more enjoyable as an audiobook than it would have been in print form. Each chapter is told from the perspective of either Grace or Vaughn; therefore, it was much easier to follow since each character was read by a separate actor. The voice actors do an excellent job of bringing the characters to life. I would look for books read by these voice actors in the future.

#HashTags are beginning to rule my world.

Status:
Once Again, I'm blown away by this series. It just keeps getting better. JA is absolutely brilliant with the twists and turns and it's mind blowing! I'm officially in love with Vaughn. Stick a fork in me I'm done! He really redeemed himself in this one IMO. Vaughn = Wet panties!! OMG!!

I thought that Block was my fav listen of the bunch but no... Status has definitely been my favorite of all! I'm in awe with this series with the fact that it's such a unique concept and the writing is just brilliant. JA's characters are so complex and they draw you in.

Profile:
All I can say right now is WOW! Profile had me reeling. I was so on the edge of my seat with this one, biting my nails and, cursing the narrator, you name it! Every range of emotion with this audio, happened.

Home:
This series deserves every star possible! I was not ready to say goodbye to Vaughn and Grace yet but it was so amazing. Every question every doubt is finally addressed and dealt with. I'm typically not a big fan of serial novellas but JA did it in a brilliant way and only had us waiting two weeks in between books.

I'm so happy with the way this played out. Job well done JA! #AGAIN

Entertainment on the lake

When I first started listening to this book, I felt it was another version of 50 Shades and almost stopped listening. But, the story line took enough turns to keep me hooked, as did the voices I was listening to. By the time I finished Social, I couldn't wait to start Media and find out the resolution.

I very much enjoyed the series and the actor's voices. Hoping to listen to more in the near future!

best listen ever so sexy so hot such a good love story. this one will have u wanting more n more

I love these two

I love these two. Their relationship is funny and emotional. Social was obviously funnier and Media is heavier, but I love them all

I Loved This Story!

Yes. I read these books and then listened to the audio. Amazing story with lots of drama.

What other book might you compare Media to and why?

Any of the JA Huss books are great. Unique stories but she has a great style.

Something about social media and Twitter. I'm not very creative but that is a huge part of the story.

I highly recommend any stories/audio from this author. You will not be disappointed. I loved the readers on this audio!

What made the experience of listening to Media the most enjoyable?

The narrators are very good. When the story was more serious and intense for main character, Grace, narrator Autumn Clark's narration changed to match the tone.

My favorite character was Vaughn Asher. He might not have been the world's best person in the past, but he is so committed to Grace. When it comes to his family, he is loving and devoted. He's a good man or at least he is trying to become a better man.

When Vaughn tells Grace she is a bad a$$ princess who doesn't need saving.

There were several moving moments, but I'm not going to ruin the experience by sharing spoilers!

J.A. Huss knows how to create interesting characters and keep readers riveted as she reveals all their secrets.

I loved the character development in Follow, the first book in the series. Grace and Vaughn are a mixed bag of all-messed-up, and when they meet the fireworks start. Ms. Huss made me want to like them but not quite be able to. I vacillated between being riveted and disgusted by the choices they made.

The interjections of hashtag comments, social media banter and faux pas was a fabulous injection of humor. The depiction of the lavish lifestyle of Hollywood royalty was mind blowing. The segue between books four and five was excellent. The loose inclusion of characters from her other series is fun for long-time fans. For the overall series, the plot was compelling. The pace of the story and the character development were perfect.

In this final half of the series, the tone is much more serious at times, the suspense is riveting, and the romance is swoon-worthy.

Not what you think!

I can do do recommend this audio book. I recommend Ja Huss a lot and now having them being played out in my ear brings them up quite a few more notches.

I can't tell you that! Let's just say this story is not what it seems to be.

No surprise that ja Huss writes a fantastic book. It has everything.... suspense, lust, darkness, light and intelligence. I purchased all 5 and had them read in a couple of days. Could stop listening. This is a complex incited path though the pitfalls of fame and lack of privacy today. Although Autumn Clark talks too fast for my liking . Mark Kamish more than makes up for that .... wow he has me turned on ( even when there is no sex scene) with that soft caramel husky voice. And when the heat is ramped up I’m in a shaking mess.