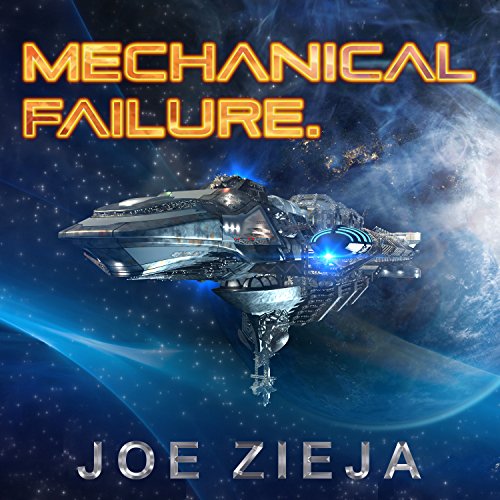 The 200 years' (and counting) peace was a time of tranquility that hasn't been seen since...well, ever. Mankind in the Galactic Age had finally conquered war, so what was left for the military to do but drink and barbecue? That's the kind of military that Sergeant R. Wilson Rogers lived in before he left the fleet to become a smuggler.

But it turns out that smuggling is hard. Like getting-arrested-for-dealing-with-pirates-and-forced-back-into-service kind of hard. It doesn't seem so bad - the military was a perpetual tiki party anyway - but when Rogers returns after only a year away, something has changed. These are soldiers - actual soldiers doing actual soldier things like preparing for a war that Rogers is sure doesn't exist. Rogers vows to put a stop to all this nonsense - even if it means doing actual work.

With an experienced ear for military doublespeak, Joe Zieja has created a remarkable and sarcastic adventure in Mechanical Failure.

What listeners say about Mechanical Failure

This book helped save my job!

I have hard job, had had enough of the idiots at work. I was going to jump ship . I got this Sunday night ,started in ,and did not want to put it down. I went to work started it back up,and made it through the day! At the end of the shift a co-worker asked what I was laughing about all day. He said I have worked with you for three years , and I have never seen you laugh like that! Get this!

This is one of the best first novels I've ever "read" of any genre.
The narration has the totally engrossing quality of a story being told (well), rather than one merely being read. The only other author who has had that effect on me was Nathan Lowell.
There's a character in this book who has a similar talent - you want to stop and listen intently to every single word.
[CALL FUNCTION: EXPRESS ADMIRATION AND ENJOYMENT. OUTPUT STRING: I look forward to the other two books in the series (and hopefully more). Seriously. This book is [EXPLETIVE] hilarious and very well written.

always welcome an opportunity to hear a book read by the author! for better or worse, you get exactly the spirit the author was trying to convey. all in all, it was a funny lighthearted book that was a well needed break from all the serious military sci-fi i have been reading. awesome!

took a bit to find it's voice

The first third of the book was a bit clumsy and I didn't get a good feel for where it was going (not in a good way). However, as it progressed, it started hitting it's beats and ended up worth the ride. I was expecting something along the lines of Red Shirts (John Scalzi) but it headed in more of a Futurama vibe, not in a bad way. I enjoyed the secondary characters, there were some LOL moments. I won't spoil them, but you'll know.

Awesome book, had me laughing out loud in public.

This is the first self narrated book that I have enjoyed. I would listen to this guy read others books as well. He needs to work on using different voices for different characters but he did a great job overall.

I have bought scores of audio books on audible but have never been moved to write a review. This new author deserves it. I will be keeping my eye out for any new stuff that he writes. He has a great sense of humor.

you might consider it cheezy. but definitely fun to read. i spent good time listening to it.

hilarious and exceedingly difficult to put down .

my god this book made me laugh out loud many many times . I had such a hard time putting it down. usually authors don't make good readers but this performance was quite Good . The story was airy and made to amuse. The characters unique and we'll defined

Funny take on military life, good military science fiction, funny and well paced, the author is the narrator and was excellent.

The author narrates space SF - go buy it and laugh

Would you listen to Mechanical Failure again? Why?

In the early days of mass-market audio books on cassette tapes the label trumpeting that the author also narrated the audio version was a sign that even an excellent story could be screwed up, the flow and pace of the story would be complete {Male Bovine Feces}, and not worth handing over your money.

There are some excellent books out there on the market, completely {Expletive} {Expletive} screwed-up in the audio version by a narrator who has no idea what the author means or wants.

This first book in a new series from Joe Zeija is a pleasant surprise, a light SF space based romp, who knows exactly how the story reads in his mind, and has the skills to bring that fun version to the microphone himself.


Actually Joe has various axes to grind about military organizations, and the kinds of personalities that sponge, leech off, cheat colleagues, and generally take the {Expletive} in peacetime, and also how the mad roulette wheel of promotion can also {Expletive} other people's lives, especially when a war starts.


Looking forward to the next in the series

If you want a solid story, witty writing, and a great narration, this is the book for you!

It’s a fantastic story, loved every minute. Joe zieja does a great job of reading it too.

I laughed out loud at work. They all stared stared at me like I was a crazy person. 10/10 would laugh again.