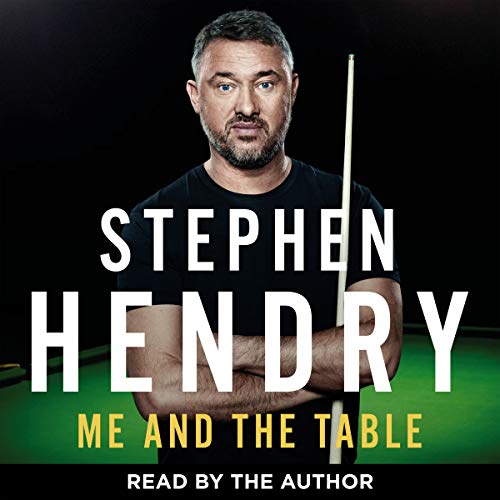 Me and the Table

Stephen Hendry became the youngest professional snooker player in 1985 aged 16 and, in 1990, he was the youngest ever snooker World Champion, at the age of 21.

Widely regarded by fans and pundits alike as one of the greatest players of all time in the sport, over a 27-year career, Hendry went on to win the World Championship seven times and was snooker's world number one for eight consecutive seasons between 1990 and 1998. Hendry retired in 2012 with a record-breaking seven World Champion titles under his belt, a record that remains to this day. He's now ready to tell his life story for the first time - from a childhood spent climbing the ranks of the sport, through the highs of the '90s and lows of the 2000s, to his life now as a sports pundit and commentator.

An insight into the world of the man behind the cue and what made him such a top-class player. This is the definitive autobiography of the legend that is Stephen Hendry, as told in the author's voice.

What listeners say about Me and the Table

A fantastic account of Stephen's life in his own words. A deeply interesting person and life.

great book! wasnt a fan of Hendry love this

great book! wasnt a fan of Hendry love this! great insight into his life a successes! the smooth way he narrates the book aswell is very nice! could almpst use it to meditate

Great insight into the life of the seven time world champion!

Really good listen for any snooker fan. Although I don’t agree what he did to his wife, I have to admit it takes a lot of guts to talk about how important Mandy was to him during his career and why he did what he did to her back in 2013
. This book showed the mindset of a champion and the downfall of the legend on the table.

I would recommend this book to any snooker or sports fan!

Engrossing listen from start to finish and brilliantly narrated by the man himself.
All chapters have their own story to tell and a few really stood out for me. his relationship with Ian Doyle (his manager) and his pure drive and determination to be the best is fascinating to read.. Stephen is very honest when he comes to his emotions about losing his game and the end of his marriage.. I am biased in saying this as hendry is a personal sports favourite of mine but this book will appeal to any snooker fan or anybody who wants to know how a top sportsman deals with success and failure.

Stephen Hendry did a good job of narrating his book. It is a fascinating look into what creates a top notch sportsman. He is driven to succeed, dedicated and hard working and loves playing snooker. As someone who was a big fan of the 1980’s and 1990’s game I found this autobiography a riveting listen. Stephen worked tirelessly to succeed, and his family background and relationships with his parents, Manager, girlfriend and other snooker players are described openly and are interesting.
He lives away from his children now and seems to need to always be on the move and travelling a lot. I think There’s something about him that is still striving for that buzz of success and that comes across throughout this book. He is honest, likeable, and well aware of his ego. Well worth a listen.

If you're a snooker fan then get this and enjoy. Stephen is open and honest with a lot of aspects of his life which mustn't of been easy to admit. You get an insight into his mentality of winning and losing which is borderline mental illness in my opinion but it is what it is. I can't see anyone not liking this and I'm so pleased that he narrated it himself. Thoroughly recommended.

If you are a fan and hold him in high regard, maybe this book is not for you. It could disappoint you to find out the type of person he is. I totally admire his talent and achievements, but he comes across as a poor Husband, Father and Son who is very arrogant. Nevertheless, I enjoy anything snooker related and was a decent listen.

I was pleasantly surprised with this audiobook, I always remember my nana calling Stephen Hendry my happy or a miserable sod, I’m glad this book is change my opinion. He was a true great and his seven world titles will take some beating, in a word ‘Legend’!

The tragic story of a man who achieved much and lost even more while seemingly failing to mature a great deal along the way. Pivotally let down by his long-term mentor and useless ex-wife, but perhaps most of all by himself. The writing is OK. The brave attempt at self-narration is acceptable.

he really is a very wierd chap!
have to type 16 characters
or at least 15 words

I am a snooker fan and reading about the history or the players is part of the enjoyment. I remember all those events. The biography is honest and well written and brutally honest in parts. It takes courage to reveal all like this. Overall a great listen.