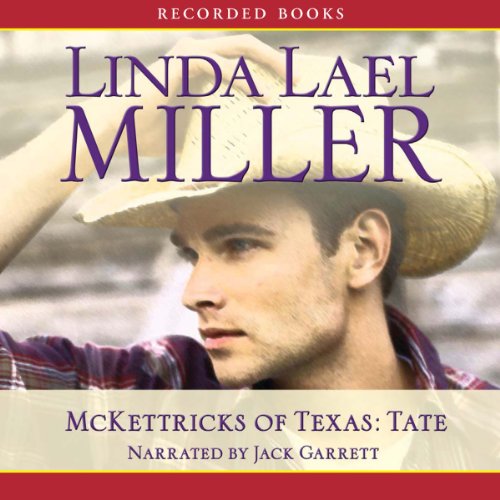 New York Times best-selling author Linda Lael Miller pens sumptuous romances eagerly devoured by fans. Here she expands her popular McKettrick series to present-day Texas. All Tate McKettrick cares about is giving his twin daughters a normal life after he and his wife divorce. But can he make time to repair his own broken heart?

What listeners say about McKettricks of Texas: Tate

I love all the McKettricks book . This one is the best of them . Mrs. Miller has out done her self.. Loved Jack Garret.. He made a great caring story even better....

This story had potential but just fell short of delivery for me. I loved the male lead but the female lead didn't quite seem to be his match. There was nothing about her that could explain this irresistible draw that Tate had for her, other than the fact that they were childhood sweethearts. Still, I love a good cowboy romance and I kept listening for that reason. I hope the next installments in the series have characters that fit together a little better.

ANOTHER MCKETTRICK WHO LETS 1ST WIFE TREAT HIM BAD

I can not believe how Linda Lael Miller has another story about a man who let's his 1st wife treat him like a dog. We all make mistakes but WOW. The story of Tate and Libby is a good one but the ex-wife still pulls Tates chains. I just wanted to grab him and shake him to wake up and be a man. The best thing in the story is how Libby stands as her own woman and lets Tate know he has to work to get her love again.

this was a very nice book to get into. I would tell anyone else about it . and to give it a read.

Tate (rich boy) & Libby (not so rich girl whose mother ran away with a biker 20 years ago) were in love since childhood. While in college & missing Libby, Tate does something stupid & ends up( trying to do the right thing?) marrying it. Fast forward : One divorce one set of twins, the death of Libby's father & the return of Libby's runaway mother .This story was basically about conniving, manipulative runaway mothers & the destruction they leave behind.

A different set of Mckettrick's but same lovable men. I still enjoy listening to all of these books.

What did you love best about McKettricks of Texas: Tate?

The gatherings that happens at Libby's coffee shop.before its demise. It seem to be a place where change happen. I love all the dogs in the story.

Which character – as performed by Jack Garrett – was your favorite?

I like all of the characters, they are very entertaining and they add dimension to the stories. Without each character the whole series wouldn't be as adventurous.

If you could take any character from McKettricks of Texas: Tate out to dinner, who would it be and why?

I wouldn't go to dinner with one character, but I would join them for a barbeque or picnic. I can go for a horseback riding, play with the dogs and have grilled chicken.

I have read many of Ms. Miller's other book series and have thoroughly enjoyed them. However, this one really did not do it for me. I found the story slow paced and somewhat boring.

Probably better to read in print

I have many books by this author, first one I've had in audio. I actually had to speed it up on my phone because it was soooooo slow. When reading these I realize I skim over much of it. So I will probably not get any in audio from this series or author. It was fine as an escape, why I listen anyway. But not too interesting.

I love a good romance and, for goodness sakes, I definitely love a good cowboy story, so I did enjoy this, but I felt that there was a LOT of extra plot that dragged the overall story down -- her mom, the coffee shop, his ex-wife, the friend/mentor/surrogate dad who died, car trouble, the police chief, young twins, child beauty pageants, deadbeat dads, custody disputes, and so on!
Jack Garrett was a great narrator and his frankly sexy voice brought a lot to the story. I will definitely be purchasing the other two McKettrick brothers' stories.