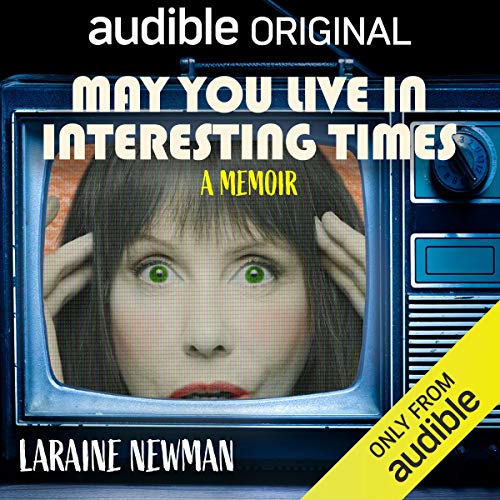 May You Live in Interesting Times

“Not only is May You Live in Interesting Times a riveting memoir of Laraine's life and stellar body of work, but just hearing the genuine charm in her voice will make you fall in love with her. An extraordinary treat.” (Alan Zweibel, Emmy Award-winning writer and cocreator of It’s The Garry Shanding Show)

“Hearing Laraine Newman’s amazing life story told by the comic genius and comedy pioneer herself is an experience you hope will never end. I loved every second of it.” (Paul Feig, director of Bridesmaids, The Heat, and Spy)

“Laraine Newman’s writing is fun and smart enough as it is, but to get to hear her warm, weary voice reading her words? This is beyond a win-win.” (Patton Oswalt, Emmy and Grammy Award-winning comedian and actor)

From growing up in Los Angeles with movie star neighbors, bearing witness to the music scene in the 1960s and seeing the rise of comedy in the early 70s, to studying mime in Paris under the tutelage of Marcel Marceau to becoming a founding member of the seminal comedy troupe The Groundlings, it's no wonder that Lorne Michaels offered Laraine Newman a spot in the original cast of Saturday Night Live. There, along with famous cast members John Belushi, Dan Aykroyd, Chevy Chase, Jane Curtain, Garret Morris, and Gilda Radner - Bill Murray was passed over at first and joined in a later season - Laraine was part of the show that changed TV - and comedy - forever. But it isn't all yuks and glamor. Laraine struggled with demons, arriving in New York City with an attraction to drugs that started as a vice and grew to be an all-consuming addiction - even as she skyrocketed to fame via her memorable characters on SNL.

May You Live in Interesting Times is a warm, funny, heartfelt snapshot of 1970s New York City and SNL's unexpected rocket to success, with all the giddy headiness that that entailed. After five seasons, Laraine left SNL, and worked in movies and television, while having adventures and relationships in Hollywood that, in her words, “should have gotten me killed.” Now with longterm sobriety, she became a parent and reinvented herself as a voice-over actor and has a thriving career working on such animated favorites as Finding Nemo, Monsters, Inc., Despicable Me, Inside Out, Shrek, and Minions.

What listeners say about May You Live in Interesting Times

Ms Newman is a legendary comedian, actress and performer who is a living time capsule of 60+ years in and amongst the entertainment industry and how she traversed and survived.
It's like having a personal performance of her life story and I want to go through it again, hell it makes me wish I could pick up the phone and discuss it with her.
Well done Ms. Newman and thank you for the stories and honesty.

LD;DR Well done. Audio-only, here only. Worth it.

The least compelling cast member knows that's how it was and just lays things out accurately. She sounds wise and clear-eyed. Most dependable history (no doubt) memoir we're likely to get from SNL cast. Also she was a close friend of Susan Berman, later killed by Robert Durst. Her quotes from Susan gives no refuge to "Bobby" Durst, puts it all to rest.

Name drops 200 people and it's just accurate and you can tell there's real relationships there. She grew up rich in Hollywood and knows/knew tons of show biz people. I like her perspective, sorta what she's always been, the closest thing to a normie in the skit!

Honest. She acknowledges there's things she won't be talking about. Moving talking about Belushi, Radner, etc. Her performance is somewhat affected, as befits someone with a career in voice-over, and it ends up sounding professional and thus easier to listen. Professional narration.

I'm sorry about her unnecessary plastic surgery. Everything else is gold as actual history, not just someone's "narrative."

I listen to a lot (A LOT) of memoirs and celebrity autobiographies, and this is an excellent example. Laraine should write more (of everything), she has an elegant way with a phrase, and of course, she’s a great voice performer. She’s also honest, and respectful of her children’s privacy, which I admire.

For those of us old enough to be a Freshman in College in the Fall of 1975, she and the original cast were staples in our College Saturday Nights, watch the hour and a half while partying in the dorm or in a house, then go downtown after the show and party for three more hours. Laraine’s book is beautifully narrated by her giving us glimpses of her personality, her troubles, and successes. Because SNL was so ground breaking when it started, she and her cast mates were like fellow rebel rousers to us, part of what we so enjoyed in the second half of the 1970’s. So even though I have never met her, our commonality of being a member of the same tribe, working in NY in television, and working in rooms where other people’s talents could make us feel undeserving or under appreciated... made the whole Audible experience like sitting down with an old friend. Laraine we loved you then and now, bless you for finding your own path and being successful at it and finally understanding that you didn’t have to be John, Danny or Gilda. We love you for your talent that you have shared with us in so many ways.

Ms. Newman is heartbreakingly honest, and captivates us with her witty delivery. She is one funny lady!

Probably the most underrated of all the original cast members ms Newman has a friendly entertaining and engaging manner. She never becomes saccharin or maudlin as she speaks of her successes failures and insecurity. I found myself empathising with her every step of the journey.

I did not find the book funny nor entertaining. A life of drugs and lots of name dropping and words is not my cup of tea.

I couldn't stop listening to this. She's a wonderful story teller who's led an amazing life.

great stories about her life and the many she worked with. heartfelt. brought back memories

Laraine Newman has always held a special place in my heart since I saw her Katharine Hepburn impersonation in a Mommie Dearest spoof on SNL 700 years ago. Hers is an honest, engaging, and thoroughly entertaining memoir, performed by one of the best voice actors going: Laraine Newman.

Great History of some of my favorite comedy

Thank you Ms Newman for this wonderful book and for your honesty about your struggle. This is easily one of my favorite memoirs.