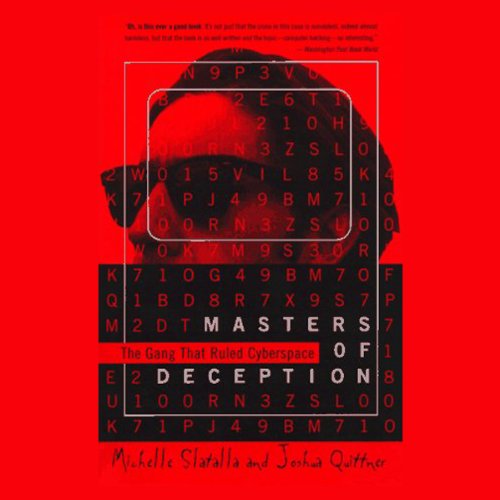 From the bedroom terminals of teenagers isolated from their peers by their hyperactive intellects, to the nerve center of a nationwide long-distance phone company infiltrated by a hacker's hand, Masters of Deception offers an unprecedented tour of the murkiest reaches of the electronic frontier and a trenchant, blow-by-blow chronicle of the most notorious gang war in cyberspace.

In 1989, Paul Stira and Eli Ladopoulos, two teenage hackers from Queens, New York, made some exploratory forays into local phone-company computers and discovered a domain far more mysterious and appealing than any they had ever seen. To unravel the mysteries, they contacted Phiber Optik (aka Mark Abene) - a member of an infamous gang of crack hackers called the Legion of Doom. Phiber Optik was legendary throughout cyberspace for his wealth of hard-won knowledge about the phone system. When he was satisfied that Stira and Ladopoulos weren't a couple of lamers, the three kids arranged a meeting of the minds in Ladopoulos's bedroom.

When Phiber Optik got kicked out of LOD after a tiff with its leader, Erik Bloodaxe (aka Chris Goggans), the New York kids formed a rival gang called Masters of Deception. MOD soon matched LOD's notoriety, gaining a reputation for downloading confidential credit histories (including Geraldo Rivera's, David Duke's, and a rival hacker's mom's), breaking into private computer files, and rewiring phone lines. All the while, federal agents were secretly monitoring this highly illegal battle royal and closing in for the kill.

Slatalla and Quittner, who have followed this case for five years, lead us down the darkest alleys of cyberspace and up to the front lines of the raging battle over just who will control the web that already connects everyone to everybody else. They offer an unparalleled hacker’s-eye view of the inner life of hackers, a heady realm where order and chaos hold equal sway.

“Oh is this ever a good book. It’s not just that the crime in this case is nonviolent, indeed almost harmless, but that the book is so well written and the topic - computer hacking - so interesting.” ( Washington Post Book World)

What listeners say about Masters of Deception

I listened to this book on my Audible app for my phone, mostly during my 20 minute commute. Many times, I found myself hanging out in the parking lot or garage, waiting until the end of a chapter to find out what would happen next. The authors and narrator do a great job of bringing this fascinating group of hacker kids to life. Mark Abene, one of the central figures, is one part hero and one part tragic victim. Finding out what happened to him and his friends was amazing, and as a proud owner of a TRS-80 when I was a kid, I loved the trip down memory lane.

Not only is this a great, human story about young people getting in over their heads, and society figuring out how to incorporate new technologies, it's also a real education into how the phone systems worked and interconnected. Slatalla and Quittner have a knack for making complex, technical stuff understandable and entertaining, all the while keeping the story grounded with real people and all of their familiar vices and virtues. A great read!

The story was fantasic and the narrator was good. The reason I didn't give it 5 stars overall is because the production quality wasn't great and every "s" from the narrator had a high pitched whistle.

A+ Unbelievable recount of a time I can well remember.

A must listen for anyone who was fortunate enough to have lived through this era. The story brought me back to well remembered, much simpler time. It is uncanny how much times have changed over the last 30+ years. It seems just like yesterday I sitting with my C64 for many more hours than I should have been. In today's times you could never get away with that stuff.

Being from a telecom background, I thought this was excellent and smething I didn't know.

I had to turn the bass and treble all the way up to hear this guys' mumbling. Wouldn't have wasted a credit on this.

What disappointed you about Masters of Deception?

The whole thing disappointed me. I stopped listening to this book about 3/4 of the way through. I had listened to Ghost in The Wires prior to this. This book doesn't hold a candle to Ghost In The Wires I'm sorry to say. My advice, skip this one and get Ghost In The Wires.

Story Ok. Narrartor not so good.

The narrator whistles his "S" in every word and placement in the word. Not a good thing when listenening with headphones.

I hate to have to write this review, because I’ve read the physical book and it’s incredible. And the performer of the audiobook is great.

But the technician recording and/or editing this audiobook version failed majorly: many of the “s” sounds come out in an ear-splitting sharp sound. It’s unbearable, and I had to give up listening rather quickly.

Great story, narration could be better

This is a true story about the Hacker Wars in the late 80s/early 90s, it has just enough technical detail to explain things but not overwhelm non-technical listeners. I've read the book a couple of times since its initial release in 1995 and thoroughly enjoyed listening to it this time. Sadly the narrator has a major problem with pronouncing the letter 's' which sounds horrendous on most sound systems. This is a common problem when recording sound and de-essing a recording is well known way of fixing this problem however it has not been done here. This is a shame as if it wasn't for this, it would have been very good, sadly this let the performance down.

Filled in the gap from my knowledge of history

A great story on hacking from a time when things like the telephone exchange had become a connected network of information for computer controlled services.

Would you listen to Masters of Deception again? Why?

This is a story about the time in history when young people were discovering what technology could really do if you could get into the innards of the system. The fact that they were trespassing on telephone company property from their own bedrooms didn't bother them and seemed like witchcraft to the people on the outside of these gangs. The problem with teenagers is that they like people to know when they have done something clever but this ultimately is what led to their downfall. I would recommend this book to anyone of any age, so they could hopefully understand hackers, what and why they are about and why society doesn't understand them. A good read.

What other book might you compare Masters of Deception to, and why?

I would also recommend Ghost in the wires the story of the hunt for Kevin Mitnick, the most notorious hacker ever.

I found it compelling to do just that but you have sleep sometime.

It was good, very interesting and kept me listening however it seemed to end far too quickly.. i guess that is the sign of a good book to leave you wanting to know more about the topic!