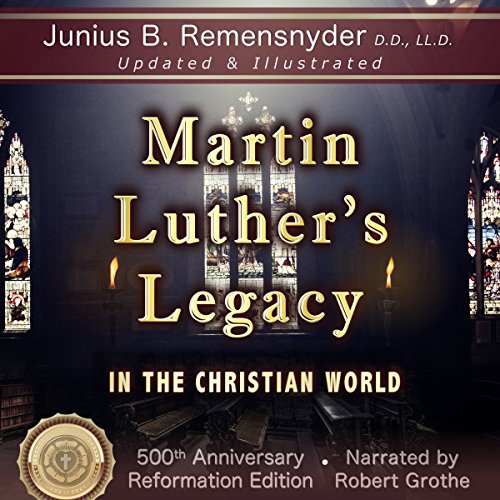 By: Junius B Remensnyder D.D. LL.D
Narrated by: Robert Grothe

In this 500th Reformation celebration year of Martin Luther's posting of his 95 theses on the door at Wittenberg in Germany on Oct 31, 1517, it seems appropriate to republish some of the classic books about Dr. Martin Luther's life, ministry, and ideas. A passionate, highly educated man, that believed without question, that all the words found in the Bible, both Old & New Testament, were the very Words of God needed for people everywhere. Luther insisted his fellow church leaders, preachers, and members teach, preach, and live according to the doctrines and truths found in the books of the Bible, and from the Bible alone. The church was but a mere vessel for God's Word to be shared, understood, taught, and applied to daily living.

The Reformation and the Protestant Movement that Dr. Martin Luther initiated, spoke for change in the Catholic Church, defended with pen, and published many books in the common language of the people for the first time on the newly invented printing press. Pulpit preaching, university teaching, debated and defended in public meetings before princess and clergy, all made bold proclamations for reform. Dr. Martin Luther posted his 95 Theses, points for dialogue and reform. The key points made were man's words, be they from councils, philosophers, popes or kings, they must always be subservient to God's Word and the truths found in the Bible.

Dr. Martin Luther changed the world, not by sword, power, or might, but by the simple truths he discovered were already stated in the Word of God, the Bible. Luther inspired the common people to think for themselves. The Protestant Reformation quickly spread throughout Europe and Asia and opened the door to missionary work around the world. Much of what America stands for in personal freedoms, civil liberties, work ethics, and human equality before God, finds its roots in Luther's Reformation. Dr. Martin Luther was truly a man after God's own heart.

What listeners say about Martin Luther's Legacy in the Christian World