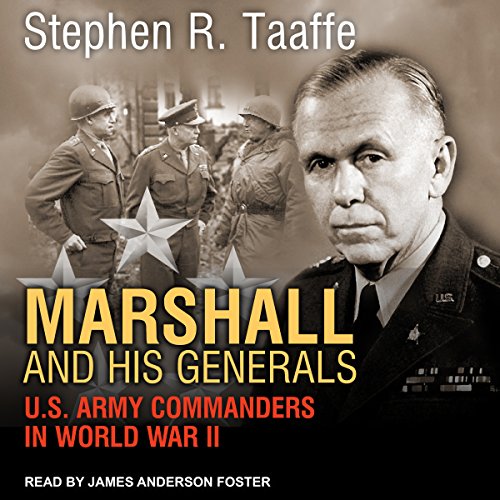 Marshall and His Generals

General George C. Marshall, chief of staff of the US Army during World War II, faced the daunting task not only of overseeing two theaters of a global conflict but also of selecting the best generals to carry out American grand strategy. Marshall and His Generals is the first and only book to focus entirely on that selection process and the performances, both stellar and disappointing, that followed from it.

Stephen Taaffe explores how and why Marshall selected the Army's commanders. Among Marshall's chief criteria were character (including "unselfish and devoted purpose"), education (whether at West Point, Fort Leavenworth, or the Army War College), and striking a balance between experience and relative youth in a war that required both wisdom and great physical stamina. As the war unfolded, Marshall also factored into his calculations the combat leadership his generals demonstrated and the opinions of his theater commanders.

Delving deeper than other studies, this path-breaking work produces a seamless analysis of Marshall's selection process of operational-level commanders. Taaffe also critiques the performance of these generals during the war and reveals the extent to which their actions served as stepping stones to advancement.

"Taaffe's penetrating look at the Army's 'one indispensable man' shows how commanders like Omar Bradley, 'Vinegar Joe' Stilwell, Courtney Hodges, and their peers were selected and deployed - and how they kept their jobs." ( Wall Street Journal)

What listeners say about Marshall and His Generals

George Marshall was appointed Chief of Staff of the Army on the day Britain declared war on Germany. The army was small and had suffered decades of austerity. The promotions had been stagnant and there was lots of deadwood. Marshall had to quickly get rid of the deadwood, increase the size of the army and provide it with the latest equipment as he prepared the army for World War II.

The book is less about Marshall the man, but focuses on how he chose his generals and a brief biography of each of his generals. Taaffe provides a good understanding of how Marshall’s command appointment directly influenced the war. Taaffe points out the strong and weak points of each general. The author includes the famous and lesser known generals and covers both the European and Pacific theatres.

The book is well written and researched. The author left me with a good understanding of the command staff during World War II. The book is easily readable.

The book is just over seventeen hours. James Anderson Foster does a good job narrating the book. Foster is a ten-time Voice Arts nominated Audiobook Narrator. He won in 2015, 2016 and 2017. This is my first experience listening to Foster. This is also the first time I have read a book by historian, Stephen R. Taaffe.

Good book - very interesting. It is inexplicable that the narrator is so very bad at pronunciation of proper nouns. There are two acceptable variants: pronounce proper nouns actually correctly OR at least use the standard English pronunciation of these words. Simple place names like Alsace are simply incorrectly pronounced and even Pershing’s name is occasionally fumbled. Inexplicable and highly distracting. This would get a better rating with a narrator who put in just a *little* effort to get names right.

struggled with thisnone hut it was interesting to see the inner workings of all the Generals involved.

I was looking for an extended version of “Brothers, rivals, & victors” but instead got an extended college like paper (that is really an exaggeration it wasn’t that difficult) on the generals.

I actually gave up 1/2 way through.