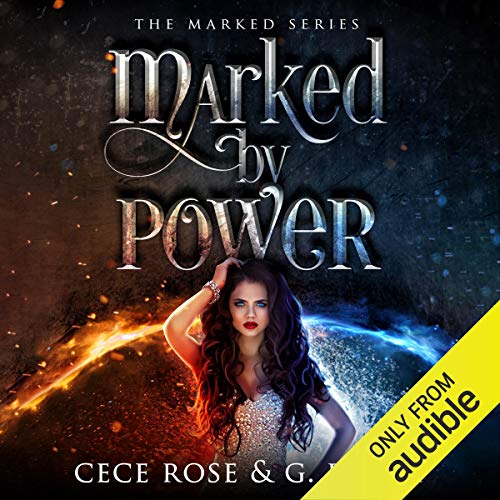 When Mackenzie's 17th birthday comes around, she plans to spend a few years at the school for the marked learning about her new powers and then leaving and living her life. But nothing goes as planned when she attends the marking ceremony and all 12 marks appear.

Kenzie lives in a world where being marked with six powers is normal, being marked with seven or more is rare. But being marked with 12? Well, that's unheard of. With learning about her new powers, the last thing Kenzie needs to worry about is falling for her hot teacher. Not to mention the unneeded distractions of the sexy twins, the jerk in all her classes, and her older brother's best friend who finally seems to notice her. Romance and marked powers are never a good mix, not when there are people who desire her for more than her heart.

Kenzie may not know, understand, or want her 12th power, but someone does.

I have always avoided buying this book because it's another reverse harem but boy oh boy was I wrong, this book is fast paced, characters are well developed and even the few POV of the men still it's a fantastic story that hooked me from beginning to end. The only thing is because it's a series it always ends up in a cliffhanger *sighs* the narratives wow the English accents are sexy as and their wonderful and Kenzie she is delightful and feisty.

Interesting premise but found the characters not that interesting. It is not a very long story so that might have added to it but the story ends on a major cliffhanger and I absolutely hate that, especially since the book is already kind of short in regards to the overall progress of the story.
You don't really spend much time on background/story to get to know the characters/world/magic system, so I just didn't really care.
I guess the reason I am really writing this is because there was not any real story payoff in the end.

Nothing happens in this book

First off, listen to the sample. Something I must learn to live by. I read the books summary and was intrigued. During the entirety of this book it is every guy is so effing hot, everyone wants to screw the main girl Mackenzie, and She's always winding up naked. Literally the whole book. She goes to all but one of her classes ONCE. Other than one provincial vision there is no story line. This is one of the worst books that I have ever read/listened to. Please do not waste your money on this book.

Loved Marked by Power in audiobook!

I fell in love with this first book in Kenzie's story! I couldn't help fall for Mr. Daniels and Enzo, but all the guys are great and I love their budding relationship with Kenzie. I also loved her relationships with her family and Kelly. It was cool to see her different powers, definitely could see this being a tv series because it has all the aspects that would fit on like the CW right now haha: supernatural/paranormal creatures, tension, intriguing plot, drama, awesome bad guys/gals. What more could you ask for!? Love this series!!

I enjoyed the narrators as well! There were some times that weren't as believable but that might have just been its the first part of the series and there is more background than normal. Can definitely say Book 2 was better for me and had me stopping what I was doing to listen (not too upset since it was housework/chores haha). Loved the different guys, sometimes it was hard to distinguish between them. Thought it was a solid performance and would definitely listen to more of them. Can't wait til they are all on audible ❤️

Everything was perfect! Great story, awesome narration! The characters are developing fantastically! I will be starting the next one right now!

Too lusty for a good story (spoilers)

The book is a bit more childish than I’d like. It is hypocritical in how lust filled it is. It says in the book that the FL isn’t as lustful or falling at the feet of the males mentioned but repeatedly shows the opposite. Plot holes are filled with teen angst that doesn’t fit how the characters are portrayed. I love the idea of a society where women typically have multiple men married to them for population increase, but it isn’t fleshed out as well as I’d like; it still has all the jealousy and ‘oops I just happen to fall into another man’s arms after being in a different ones earlier and didn’t mention it. Hope no one is mad!’ It is about young adults but still. Feels like and adult write this book after only thinking oh teens only think about shagging while claiming they don’t. Wish the characters that the authors spent so much time on didn’t get reduced by contradictions and too much list to make the book ‘sensational’. But even so I did still like the book. Just wish it wasn’t pulling itself down.

Great idea not living up to its potential

Narrator was great, and the plot had great potential, but it focuses WAY too much on the guys and how “hot” they are. I swear half the book is descriptions of the guys’ hotness and the word “body”. Still worth the read, but just be ready for the reverse harem focus in the first half of the book. It takes quite a good amount of time and picking to get to the actual plot.

Over-Sexed and Not Enough Real Action

This could have been a great story akin to two other similar ones I've read, but I had too many problems with how the story was handled. Don't get me wrong, this was clearly a YA story so I went into it with eyes completely open. But many YA stories are great, such as Schooled in Magic or Zero Enigma. Here's my problem with how this story went. First of all the main character was just too much a victim. I get writers to have to present their main characters with problems they have to work to overcome, but it seems like everyone in the book could beat this character without much work. The second one is, okay how can I put this. Dear authors; no one, and I mean NO ONE, is that distracted by sex that much except in adult movies. Every chapter seemed to read like this: "OMG, the dangerous person is after me, but wow that guy is hot and has a nice package." Sure, guys notice woman parts and I guess woman notice guys parts, but if you're in trouble thinking about what sex would be like just doesn't come to mind. Maybe this is the kind of person the main character is supposed to be, but it happened way too much and was too damn distracting. A final problem is that instead of being surprised, the dangers just seemed to come out of no-where. All of a sudden this person is trying to kill the main character and it didn't feel like it was leading up to or foreshadowed. Even the big twist just seem forced.

I do not have a problem with a narrator sounding like a kid when they do young characters. But these students are supposed to be 17 years old. The narrator made everyone sound like they were 13, except the over-preoccupation with sex.

Like I said, I take YA for what it is. It's not aimed towards my demographic but it can be written in such a way that anyone could enjoy it. (See my reference to two YA series that I feel anyone can enjoy.) There are similarly bad books in my demographic with their own set of issues. This one wasn't my cup of tea. I don't think I'll be reading the other parts of this series.

Lots of creative potential but...
First, the opening scene is not a clip from the climax or very end. This isn’t Twilight.
Next, Co-Coward comes BEFORE Cr-Crowe when alphabetizing.
So what animal did she shift into? Large paws could be anything outside bird or reptile. White fur and growl only rules out one or two animals.
There’s a real logic disconnect when, for her protection, Kenzie is moved FROM the main dorm with many students TO Mr Daniel’s cabin “far outside the school; practically in the middle of the woods, and a far distance from the other teachers cabins”.
Especially when she is often alone, and the main danger is rebels attacking the school....
I’m curious to see where the authors take the next installment, but hope they tighten up on editing.
I REALLY like the ensemble cast for narration. Tops!

Not a book for TEENS

Too many curse words , strong ones. Do all English people talk like this? I hope not. Too much boy craziness. I'm not sure I like her.. The story is different for sure but could much better.

This book follows G. Bailey's usual storyline of her other books - a 17 year old girl finds that she is uber powerful, she falls in love with a set of twins and a couple of other perfectly handsome boys at the school (including the super sexy teacher) and they all fall madly in love with her. You need to read her books in order, because the 1st book tells the story up to the plot hook. Then the 2nd book picks up where the 1st book ends. I really like the way she includes chapters told by the boys' (with different voice actors reading those chapters) from their' point of view. It really adds to the story in my opinion.

Just wow!
What a great start to the series!
Great storyline amazing characters that interact well.
Good narration already downloaded the next in the series ;)

Good book
Super easy to listen to.
Narrator is good but the male voices don’t sound right to me.