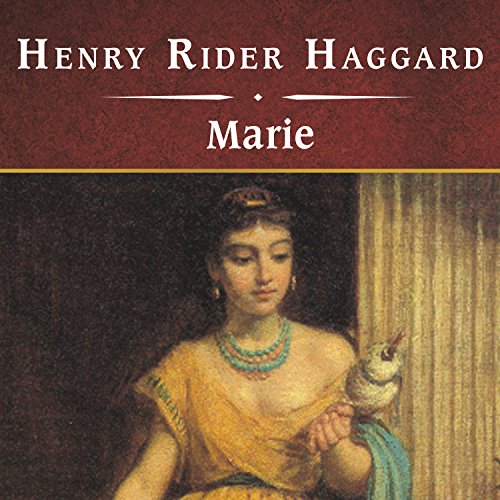 Allan Quatermain may be British born, but that doesn't stop him from loving Marie Marais, a Boer maiden in South Africa. Nor does it stop her from returning his love, although their marriage ends in tragedy born of racial hatred. Shelly Frasier transitions easily among British, French, Dutch, and American accents in her sober performance of this classic, sometimes within the scope of the same character. While this occasionally leads to confusion, her thoughtful narration of the sad and frustrating story keeps the listener riveted from one distressing scene to the next. While the cultural disputes of 1830s Africa seem insurmountable, Frasier's compassionate portrayal of Haggard's text makes the listener yearn for a peaceful solution.

Allan Quatermain, hero of King Solomon's mines, tells a moving tale of his first wife, the Dutch-born Marie Marais, and the adventures that were linked to her beautiful, tragic history. This moving story depicts the tumultuous political era of the 1830s, involving the Boers, French colonists and the Zulu tribe in the Cape colony of South Africa. Hate and suspicion run high between the home government and the Dutch subjects.

Allan accompanies the ill-fated Pieter Retief and the Boer Commision on an embassy to the Zulu despot, Dingaan. Villains attempt to kill Allan and rob him of his wife. The unfortunate mission ends in a blood-curdling massacre. Written at a time when slavery was widespread, Marie portrays characters and views reflective of its era.

What listeners say about Marie

One of Haggard's Best

This is one of the best Allan Quatermain books. If you enjoyed King Solomon's Mines, you we definitely enjoy this book. The narration is very good.

As a huge fan of

Alan Quarrtermain King Solomon's Mines and just about any Victorian adventure novel,, I was a little bit taken aback by the choice of a female narrator Orso swashbuckling a hero. And although I enjoyed the book, it was clearly an after thought by the author who, having run out of adventure, decided to try a little romance. For those Alan Quartermaine fans who prefer his tough guy sidekicks and rampaging battles, this is not the first choice

Haggard At His Best!

Would you listen to Marie again? Why?

Absolutely, this is easily one of his best novels.

What was one of the most memorable moments of Marie?

Without a doubt the raid on the Marais property. You could feel every thrown spear and every bullet shot. Fantastic!

Have you listened to any of Shelly Frasier’s other performances before? How does this one compare?

Yes, She is impeccable. She is superb in her reading, not too melodramatic, just right. One of my favorite narrators.

Yes, unfortunately real life got in the way.

Please produce more of the Quatermain novels for Audible. There are only about five so far. Please record the others.

If you read this, taking in the period it was written and not try to put modern day morals on to the characters- you will find a descriptive, enthralling story with characters you get to know and care about. Enjoyed the narration - makes my 45 min drive to work something to look forward to.