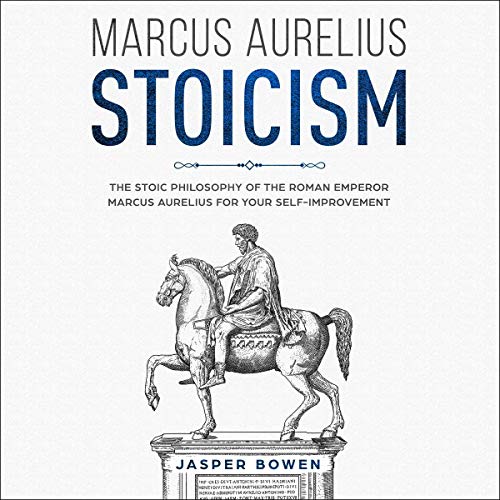 Marcus Aurelius was a Roman emperor from 161 to 180. Known as the most famous supporter of an ancient philosophy called Stoicism, the emperor Marcus Aurelius was famous for his extraordinary calm that he had even in the most difficult situations. It is assumed that the emperor was able to maintain an extraordinary calm and composure even in the tensest and difficult moments thanks to training in Stoicism.

In this audiobook, you can understand the philosophy and Stoicism of Marcus Aurelius. Thanks to this, you will understand how to learn to manage your emotions and get confidence and wisdom in everyday life like the great Roman emperor, Marcus Aurelius.

You'll find out: what is Stoicism, the philosophy of Stoicism, the Stoic empire, seven lessons on life and happiness from Stoic Marcus Aurelius, and much more.

Begin your great adventure of wisdom accompanied by the illuminating teachings of Marcus Aurelius, one of the greatest Stoic philosophers of all time, to improve by far the chaotic life that overwhelms you and face it with determination, lucidity, calmness, and prosperity.

Helpful phylosophy for me.

I am fascinated by the philosophy of stoicism. Through this audio book, I learned the history of the emergence of this doctrine, the basic concepts of stoicism. The information about cosmology and theology of stoicism was interesting and informative for me

This book is great because it offers

This book is great because it offers actual suggestions of things to do to practice stoicism instead of just meaningless information.

This audiobooks explains the history

This audiobooks explains the history as well as the tenets of Stoicism. I like how the book gives modern day examples of how to apply this philosophy to daily life.

I've listen just about every book about modern Stoicism out there, and author book is easily in the top three. Detailed, highly readable, and truly moving.

This is a great learning book about stoicism.

This is a great learning book about stoicism. Great informative book. This book will show you how to lead a modern life in stoic way.

The part I found most helpful are the exercises

I’m really glad to get this book because I was looking for exactly this type of book. If you guys are interested to get good understanding over stoicism & psychology, then you’re on the right place now. This book has almost every important thing about this topic and I’m so happy with the quality of this book.

When thinking in terms of philosophy stoicism should come to mind. A very down to earth overview of Stoicism and the practice thereof for the modern fast paced liver of the human life. A good listen. Compliments a host of other books on stoicism.

This is a fantastic introduction to Stoicism

This is a fantastic introduction to Stoicism for the modern world. The author is extremely clear and in my case, it was almost as he was anticipating the critical ideas that popped in my mind when listening . I had a mild interest in these ideas before listening this book, but my interest and the applicability of these ideas to my life have become much more apparent after listening this book!

this book is a gem. A great practical explanation

this book is a gem. A great practical explanation of how to improve your life with stoic philosophy that anyone can easily understand from all walks of life!

I think this book did a fabulous job at explaining

It really seems the perfect guide for some one to be successful and lead a happy life.

A good introduction to the application of ancient

A good introduction to the application of ancient stoic principles to modern life. And a good perspective on how Stoicism my find new life in our times. Worth a listen.

Very glad for such an empowering audiobook.

Very glad for such an empowering audiobook. I learned many things. Would recommend without a doubt.

This is an excellent book

This is an excellent book with some new ways of thinking. The author gives a great framework for developing your mind. It's a reminder that you can take control of your mind and life but only if you are persistent enough. I find this book very informative, helpful and interesting for all the people who want to know about Mental Toughness.

This is an awesome self improvement guide.

This is an awesome self improvement guide.I was actually amazed by seeing how many important suggestions gathered in such a short book.

Many books on Stoicism focus on the history

This audiobook was amazing.

This audiobook was amazing. Some of the things mentioned I already was doing but there ate a lot I need to incorporate. Overall I would definitely suggest listening to and reading this book. Thanks to audible.com for making this conveniently accessible.

This book was given to me at a conference

This book was given to me at a conference by a friend, and unfortunately I damaged it so I bought a copy on Amazon. It was well worth it but I do wish I bought a physical copy so that I could pass it on.

I've listened many, many books over many,

I've listened many, many books over many, many years but this book changed my life and shaped my approach to living it, with full clarity using the power of Stoicism.

Life changing if you choose to embrace the Stoic

Life changing if you choose to embrace the Stoic philosophy. I now consider myself a novice Stoic and will read this book again and again to reinforce the principles until they are part of my natural being. Outstanding!