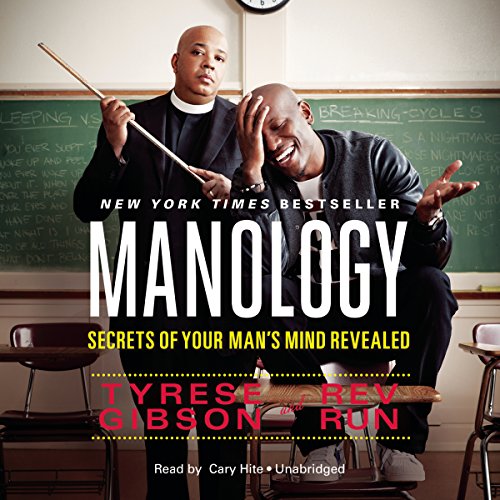 In this New York Times best seller, Tyrese Gibson, multi-platinum R&B singer and movie star, and Rev Run of Run-DMC and star of Run's House, present a bold, honest, and uncensored look into the male mind.

Tyrese and Rev are the unlikeliest of best friends - Rev is married with six kids, and Tyrese is a single dad still hesitant to settle down. But after an unexpected argument in which Rev insisted that marriage is forever, and Tyrese countered that you could bail when the sex went bad, the two decided not just to agree to disagree, but to team up and open their debate to a larger audience.

Manology will help you weed out the cheaters, manipulators, and pimps from the good men, and it will give you the tools to know if your man is the marrying kind. In "Manology after Dark", the guys even give the lowdown on what men need in bed, before and after they put a ring on your finger. Some behavior can't be changed, but as Tyrese and Rev share, it's better to face the truth. With Rev's hard-earned knowledge on how to make a marriage work, and Tyrese's sometimes uncomfortable, but always honest take on the single man's mind-set, Manology is your one source to help you take control of your love life and truly understand your man.

What listeners say about Manology

Narrator was awesome, as I find that in most of the audibles. I read this book to see if I would agree or disagree with the things they mentioned. I found it's definitely a book for the women that feel they can't seem to find the right man. Look for the non-committal signs early if you're looking to settle down and get married.

The book was informative. However, Tyrese idea of having premarital sex with his girlfriend and all the other things that don’t follow the will of God had me questioning why Rev would allow so much banter without following up with Gods will for relationships. It left me confused and I ended up exchanging the audio book for another.

great in site and a good read for men and women

Run was spot on great advice. Tyrese was great in explaining some men prior to marriage. He was on point with many things he said. But when it comes to marriage, leave that to the experts. Totally disagree with his ideals. Rev Run was very real. Very right. Wish it had been read by them though.

CONDITIONAL LOVE, FORGIVENESS, BALANCING it All!

Both writers were well-equipped with some powerful eye-opening knowledge that I needed to here. Great Collaboration.

Two OGs dropping gems. As a man I found this book very helpful for understanding some of the things women have to deal with from men. There’s a massive amount of truth in this one. Definitely recommend!

Ouch, this book goes too far in unhelpful ways

This book is for dating - I am married but was open to learning more about how men think. Wow. Just wow. I understand talking about past experiences and learning from them, but the part about guys not staying with gals because their vag is too loose, really? That was disappointing because it helps no one and it’s sounded like a raunchy comedian getting no laughs. I had to trade it in at that point.

I enjoyed the differing perspectives. Tyrese and Rev Run on the outside seem to be very opposite in their views on relationships. However, as you continue to listen you begin to hear how Rev's mantorship (defined in book) had influenced Tyrese. This book was very raw about some topics, yet that rawness was always balanced. Good read & many good nuggets to chew on. I'd definitely recommend.

I was fully engulfed in every aspect of this book. Many truths were told and I found myself constantly shaking my head in agreement. Found this book at a much needed time and I’ve no regrets. I’ve never wanted to share a book more.

I struggled to finish this audio because I was expecting something different... I t was almost like a Tyrese confession and Rev Run is counseling. Although I am a HUGE fan of both this book didn't meet the goal in which I thought it would... I remember watching the TV show they hosted and was ALWAYS walking away with some nugget... I think I would rather the show instead... Thank you

An amazing book which uses humour and antidotes. Full of useful advice that can be used it all relationships by both genders.