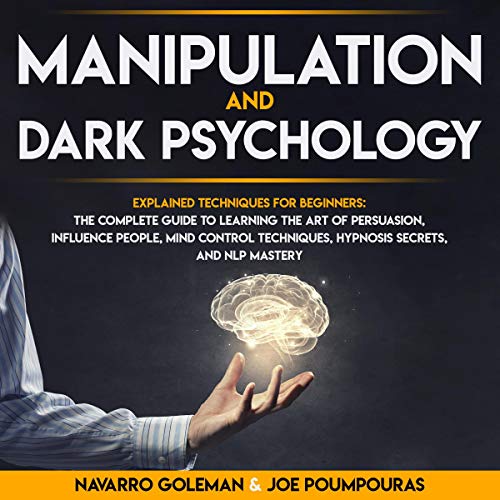 Are you tired of being manipulated? Are you interested in manipulating someone? Do you want to know secrets of dark psychology?

If you Google “dark psychology” and click through the first few articles, you will see immediately that almost every source on dark psychology uses manipulation several to many times, and that in most cases, it is a subheading within the article, or even in the subtitle to the article itself! This illustrates how significant manipulation is to dark psychology, and how broadly the two are connected. In fact, as was hinted at above, manipulation could itself be split into several subcategories. Obviously, one would be deception, which was already covered. Machiavellianism, reverse psychology, and semantics could also be described to some extent or another as kinds of covert aggression.

All forms of manipulation could be described as covert aggression because manipulation is inherently an aggressive social tactic. The proof of this is in the word "aggression" itself. Forms of aggression are, at their core, about exerting power over another person or animal. If drivers shout aggressively at other cars to move because the drivers of those others car cut them off, those drivers are aggressive because they want to impose their will. They demand because they want the other drivers to move. In other words, manipulation functions the same way. Unlike other forms of aggression, though, it has a secondary aim: to avoid detection.

This also speaks to the dark or sinister core of manipulation; it is always about power, and power is always, on some levels, angry and forceful. This is as true for semantic manipulation, a technique that can seem not just easygoing but even agreeable, like Machiavellianism, a worldview named for a famously cynical and power-hungry author and politician.

To slow it down so as not to miss anything, we will unpack the concept of semantic manipulation. Chances are you have experienced this method of manipulation in your life several times. It is, stated simply, when someone insists understanding words to mean something other than what they normally mean, as means of reframing and controlling social interactions.

The narrator really needed to preread this book

I have to be honest. I couldn't get past the 1st hour or so. The narrator trips over and mispronounced words so frequently it was distracting.

The topics the author talks about are really interesting to listen. The content of this book attracts on each page. Since I finished listening it, I see people differently and I am able to know their intentions. The book helped me develop good skills that are useful for everyday life.

This book is really informative. It explains a great understanding of various manipulation tips and explains how to avoid being manipulated.

Since I learned everything that this book teaches, I am no longer manipulated by people with this knowledge.

This book is a great resource for gaining knowledge and persuading people. This book lets me know what the 6 principles of persuasion are and how to use dark persuasion in ways that can be beneficial to everyone involved. I liked the part about learning not to be manipulated by toxic people.

This book will help you be able to spot covert emotional manipulation. Diversion vs evasion and how to do this. The more you learn, the better equipped you will be to avoid manipulation.

The subject matter is serious, albeit under a strangely titled genre. I have come across many people in my life who have exhibited several of the traits discussed in this book. It's pretty eerie.

This book deals with dark Psychology. It tells you what it is and the traits that accompany it. It Tells you all the manipulation techniques and how persuasion and dark psychology work together. It also covers being able to listen people, their body language and facial expressions.

Dark Psychology that was a very informative book. All of the information very essential for our life. I find this book very informative, useful and interesting for all the those who wish to understand about the secrets. I would highly recommended to all for this book.

This pack is very important for those who wish to learn the art of manipulation.

People always underestimated me for not being a person who did not convey security, but since I bought this book, I learned what it takes to be an influential person and to convey my thoughts and have others follow me. I am no longer underestimated; on the contrary, now I have the respect of society.

I finally got this amazing book that can really give me the necessary techniques to take control of social situations with the skills included in this pack. I can learn to influence, persuade, and manipulate other people just by looking at myself. What I really enjoyed about this book was how to analyze people.

The books are extremely interesting. I purchased only because title was catchy-but having listen books, wonder how I could have survived without the useful knowledge in each of the books. I believe that purchasing books was a wise decision.

The most interesting book in this collection,to me, I have always had a secret desire to use my brain for a favorable outcome against someone else.

Unfortunately, there are people who are manipulative, but this book will help guide you to know when you are experiencing manipulation.

Truly, in this book generally excellent clarify about Manipulation and Dark Psychology.I love this book.

This book is really about people influencing other people. It shows how easily it can be done with the right people .

If you are tired of outside forces controlling you and your life, then this book is a must listen. Book 1 focuses on manipulation.