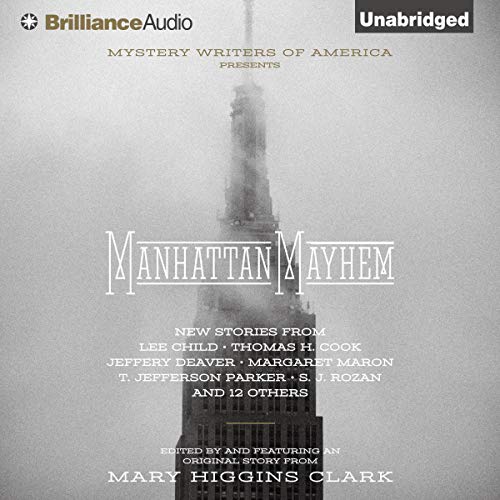 Take a crime-filled tour of Manhattan with this collection of all-new mystery stories compiled and edited by Mary Higgins Clark - with contributions by Lee Child, Jeffrey Deaver, Ben H. Winters, and others.

From the streets of Harlem to the winding paths of Central Park to the high-rise towers of Wall Street, Manhattan is brimming with motivation, opportunity, means... and unsolved mysteries. In this new collection of stories, brought together by Mystery Writers of America and edited by bestselling suspense author Mary Higgins Clark, neighborhoods in the borough come to life - or death - with their own cases to be cracked. From the Flatiron District (Lee Child) to Greenwich Village (Jeffrey Deaver), from Times Square (Brendan DuBois) to the NY Public Library (Susan Isaacs), this collection of fifteen original short stories will lead listeners all over the Big Apple.

The full copyright information can be found below:

What listeners say about Manhattan Mayhem

This was an excellent short story collection. All of the MWA compilations are good but this one was excellent. there was only one short story I didn't care for and that was style. it was written well, but just want my cup of tea.

All in all, time with this book is time well spent

Would you listen to Manhattan Mayhem again? Why?

Yes, after I forget the stories, because it was satisfying.

I really enjoyed the surprise endings. Good stories and narration.

As with any grouping of short stories you don't love them all. I loved Nancy Pickard ''s story. She is a gifted story teller. I also really liked Margaret Marion' 's story. What a pleasure to read a story with that kind of twist. I, wasn't as fond of the stories set back in time but that is just my taste. Also loved the very last story. All in all an enjoyable read.

not worth the money i paid.

The stories were mostly ok, but there wasn't enough of them considering how much money they charge for the book. Over all, i am not satisfied.

These short stories have little of the mysterious to recommend them, but given who the editor was that didn't surprise me. What did surprise and disappoint me was that they had only a passing references to Manhattan locations. I had hoped for more.