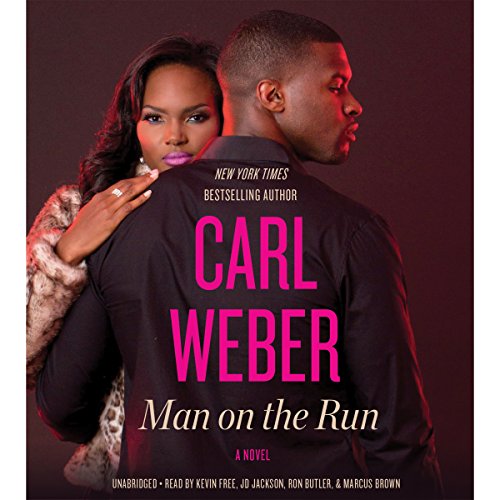 Man on the Run

It was the night before his wedding, 15 years ago, when the nightmare began for Jay Crawford - locked up for a crime he never committed. Now he's escaped prison and wants nothing more than to clear his name and protect his family. To get justice he'll need the help of the three best friends who have always had his back - Wil, Kyle, and Allan. But a man on the run requires absolute trust...and Jay may just be setting himself up for the ultimate betrayal.

"An exciting read replete with treachery, betrayal, and some spicy love scenes...Weber is a master at taking the reader on a roller-coaster ride." ( RT Book Reviews)
"Weber's skill at turning the four flawed friends into sympathetic characters affirms his trademark approach to tales of characters making terrible choices....The clever conclusion will shock readers. Kimberla Lawson Roby's fans will also appreciate this adventure." ( Booklist)

What listeners say about Man on the Run

I suggest you read Married Men first, then second read " She Ain't the One" in order to understand the history of Jay Crawford arrest and history with his friends. You can also check out the book Player Haters which features Will Duncan and his wife Diane along with Will brother Trent and their sister. The only fault I found with this book was that some of the story lines that was written in Married Men was not consistent with this book. The storyline with Allan and Rose was inconsistent they were married in Married Men and a child was involved and Rose and Jay past history was inconsistent vs Married men. Kyle two daughters name changed vs what their names was in Married Men. All Jay children name were different in this book. Overall a good book just wish the plots stayed consistent.

The narrators all added to the story. there were moments I didn't see coming which rarely happens.

Carl Weber is back on top

Historically, I loved Carl Weber's books. However, his last two books were disappointing. This book shows that Mr. Weber still has it. He's is at the top of his game again. The book is addictive, unpredictable, suspenseful, and just plain good. I absolutely loved everything about the book, and I am hoping for a sequel.

awesome would not and could not stop the flow!

I always wondered what happened to the crew from Married Men and I sure did find out! Great Story.

OMG! I love this book! I feel another sequel! Carl Weber has been my favorite author for years. Do ur Thang Carl!

What made the experience of listening to Man on the Run the most enjoyable?

I looked forward to my commute to and from work just so I could catch up on the drama of Jay, his boys and his struggle

It's hard to identify my favorite character. Each chapter told the story form a different character's perspective and I liked to hear how each character felt and reacted to the things going on around them. There was suspense, dishonesty,sex, some violence, rivalry, friendship, family, revenge and the in general emotions that come with relationships

Have you listened to any of Kevin Free’s other performances before? How does this one compare?

I have not heard any other performances by Kevin Free but I found the voices and delivery very believable. It was easy to get caught up in the story

It was a great story from the beginning to the end. It is good to read about people sticking together.

I was consumed 4 hours straight for the last half of the book. I felt all kinds of emotions, this book did not disappoint.

It was kinda hard to finish but I still tried to ugh! Team pissed! Never again.

loved it from beginning to end. Allan is so annoying but love the end. amazing